Korean clubs are unique. Physically, there is a dj, dance floor, blinding lights, fog machines, earthquake-inducing bass speakers, and all the stuff you’d find in a normal club, but the setup is disparate. Guys have to reserve a table and purchase bottles of alcohol, which are marked up thousands of percent, while girls get in free, as they are the showcase for the “booking system.” The hosts (waiters/pimps) of a table would go out and bring girls to a table. Those at the table would give a thumbs up or say naw and move on, until the next group is brought over. Don’t hate the messenger. Hate the game. Anyways, whether we like it or not, the fantasy club isn’t much different. The stats and highlights are the hosts, while the players are constantly brought to our table, when we must give a thumbs up or say naw before getting to know them better. Randy Arozarena of the Miami Marlins has caught the eye of many and looks good so far in his young career. Thumbs up or Arozarena?

Arozarena is 25 years old, 5′ 11″, and 185 pounds. He signed with the St. Louis Cardinals as an international free agent out of Cuba back in 2016. Before this season began, he was traded to the Tampa Bay Rays.

Over his minor league career, the strikeout rate was mostly sub-20%, while the walk rate averaged out to around 9%. The batting average and BABIP had a wide range (.232 to .358), while the ISO was mostly around the .200 mark. He had highs of 15 home runs and 26 stolen bases in a season across different levels.

Keep in mind that we have 41 plate appearances of MLB data to work with over two seasons.

The batted ball data shows that gophers better run for cover, as the ground ball rate is 50% or higher. The flyball rate is decent, averaging out to 35.7%, but the line drive rate is only 10.7%. For perspective, Shed Long “leads” the league with a 10% line drive rate, the only player under 11%. He does utilize the whole field, so that’s good, but the hard hit rate is only 33.3%.

The plate discipline numbers are Goldilocks, not great but not bad.

The rest of the schedule has the Rays playing BOS, WAS, BAL, NYM, and PHI. Those pitching staffs have five lefties: Keegan Akin, John Means, Martin Perez, David Peterson, and Patrick Corbin. Barring any injuries or schedule changes, if I’ve mapped out all the rotations correctly, the Rays are set to face only three lefties the rest of the way. 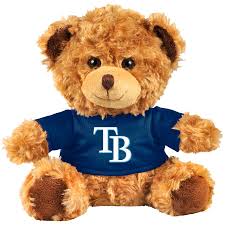