For some reason, I thought the tomahawk chop at FSU football games was cool. At Atlanta Braves games? I absolutely despised it. I’ve always wanted to dress up as a cowboy and get my Yosemite Sam on inside the stadium. I know. I’ve got issues that my wife doesn’t even want to subscribe to. So, I thought it would be appropriate to head down to Atlanta and give Liberty Media a taste of my mind at SunTrust Park. To my surprise, John Schuerholz personally greeted me outside the stadium and brought me to his private box. He said, “Son, you know what makes me great?” What’s that John? Can I call you John? “Son, look at #17 down there on the field. I have the power to slap a big ole S on each side of his jersey.” Why would you do that, John? “Well, Son, everytime he stole a base or hit a home run, I could say to everyone: Look at that S Camargo!!!” Uh…..John? “Look here, Son. Just because I have the power to do something doesn’t mean I should alleviate all of my selfish desires. Capisce?” You are wise.

On May 19th, Dansby Swanson returned to the Braves lineup. On May 20th, Jose Bautista was released from the Braves organization. Since then, Johan Camargo has been the toast of the town. With Swanson at shortstop, Camargo is getting full run at third base. More importantly, Grey told you to buy him on Friday. Laura Holt mentioned him on Thursday. It’s probably a good idea to listen to Laura Holt, as she is dominating the Razzball Writer’s League. Me? I just wanted an excuse to pay homage to one of my favorite movies of all time. Since I’m here, though, I might as well take a deeper look.

Camargo is a switch hitter that has been entrenched in the sixth position of the Braves batting order since last Tuesday. In 127 plate appearances, Camago has a 16.5% walk rate and 17.3% strikeout rate. I loooooove that. The ISO is at .212, which is probably a tad high. Most of the projection systems have him down in the .140 range. The average is a putrid .221, but the BABIP is only .234. Some regression is to be expected in both numbers. A .260-ish average seems like a fair projection. Last season, Camargo accrued 256 plate appearances in the big leagues. His triple slash was .299/.331/.452, ISO was at .154, and BABIP was .364. He hit 4 home runs. I really like what I see in the plate discipline numbers. The contact rates are in the 80% range, he’s chasing only 23.4% pitches outside the zone, and the swinging strike rate is only 7.6%.

Now, the thing that stood out to me the most when diving into Camargo were his righty/lefty splits. Last season, both the walk and strikeout rates were similar from both sides of the plate, but Camargo was much better from the right side, in terms of both average and power. This season, there’s been a huge shift the other way. He’s hitting better from the left side of the plate and displaying more power from that side. In addition, the walk rate is significantly better. The sample size is about half of last years data. With that said, I’d expect the pendulum to settle more into the middle. As Chipper Jones said during Spring Training, Camargo swung a “wet newspaper at the plate” last season against right-handed pitching.

Camargo won’t steal bases, but he does have some pop and multi-position eligibility (3B/SS). I like the plate discipline, contact numbers, and park he calls home. 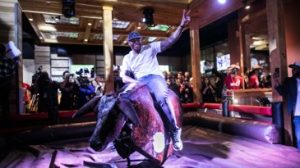 Comargo or Harrison for MI?

I need Camargo to have OF eligibility for my squad. (14-team 5×5 roto OBP)

Is he an upgrade over any of my 2B/MI/SS/CI guys?
(Villar/Russell/Peraza/Healy)

@coacher: I think you good as is

@Son: Thanks. I really expected you to say Russell, and I’m tempted after reading your column, but I’ll hold.

@coacher: Thanks coacher! Yeah, I thought about Russell. It’s close, but the upside is a little higher I think. Things can change, though.

@Kristopher Pittillo: I lean towards Difo. Will contribute in stolen bases and I’d be worried about Austin Riley for Camargo

Camargo or Munoz at SS in 10-team NL-only? Thanks Rudy

@Weird Fishes: I prefer Camargo but if you need steals, then Munoz.

By the way, this is Son. Not Rudy’s SON

You thinking 14 teamer plus and deep 12 teamers? I have Tim Anderson in my 12 team league and am ready to jump off if he ever goes COLD. Would Camargo be a good streaming option in weeks where he has a good schedule and Anderson has a bad one?

@Taylor Sims: More for deeper leagues. I’d rather stick it out with TA, as I think his upside is higher. If you didn’t think anyone would scoop up TA, then I’d think about. I’m not sure that would be the case, but every league is different.