The ToutWars Mixed Draft took place on Tuesday, March 8th. It is a standard 15 team snake draft with weekly FAAB except that it is 5×5 OBP vs standard 5×5.

I really enjoy this league and appreciate being part of it.

Quick Perspective On The Difference Between OBP vs AVG
The biggest shift in OBP leagues is the standard 5×5 ADP becomes a less reliable gauge for predicting draft choices. This makes the draft room more unpredictable and advantages more prepared drafters. I look at 5×5 hitter ADP but am more willing in other drafts to jump guys 1+ rounds.

There are other minor shifts (1Bs look better b/c they typically have highest BB rates, hitters with high AVGs but mediocre BB rates become less valuable, etc.) but this ends up baked into the projections. I have to run 15-team 5×5 OBP custom but you can access my 12-team 5×5 OBP projections and those are updated daily for Season to Date and Rest of Season as well. All free.

After a 6 year run that included 2 1sts, 2 2nds, a 4th, and a 6th (with a low of 94 standings points), my good luck in this league was decimated by injury and weak early round drafting.

My first four picks in this draft were Mike Trout / Luis Castillo / Corey Seager / Blake Snell. I survived the SP1/SP2 mediocrity with a deep pitching staff but there is no coming back from losing that much time from your first two bats (and OBP foundation). These two also put me in a position where I had to chase speed and I chased poorly with underperforming picks in Tommy Pham, Victor Robles, and Andres Gimenez.

While the Trout injury in particular was bad luck, the path to victory was there. I make a few different choices to start my draft and I could have gone Trea Turner / Brandon Woodruff / Aaron Judge / Vlad Jr.

I was in last for what felt like the whole first half until some luck corrected and a few FAAB picks (notably Jorge Polanco) flourished to bring me to the edge of respectability.

Congratulations to Adam Ronis for beating me to championship #3. 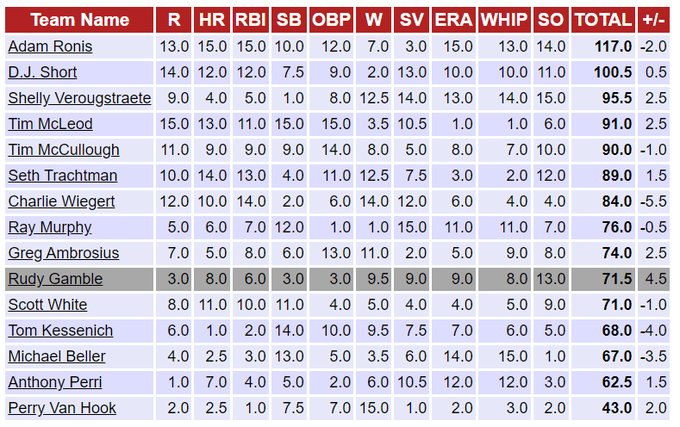 Here are the full results of the 2022 Tout Wars Mixed League Draft. 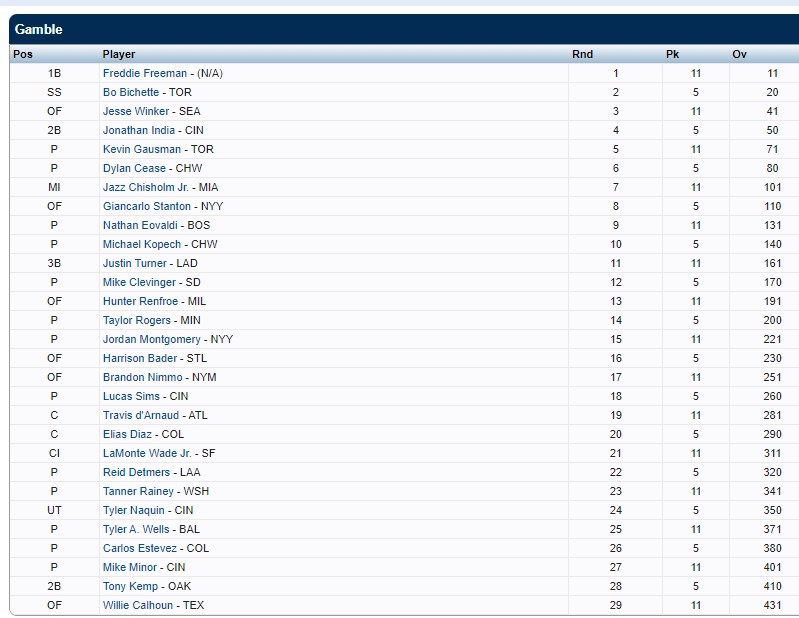 In past years, I’ve echoed the comprehensive draft review format I do for my 5×5 LABR Draft. I wanted to do something different so I am going to answer some mailbag questions. If you did not read my LABR Draft review, I recommend giving it a read.

I only got two usable questions via Twitter as the post-lockout hysteria sucked up all the oxygen. Or people were too afraid to ask me questions? I am so nice! I dunno but here it goes…

I assume you used your war room (which I love). Which picks were “in the red” according to the war room? I am guessing the closers and the catchers? For us war room users, when the market overvalues a position like closers and catchers, how do you adjust strategy?

Thanks! I did use the war room (that comes for free with season-long subscriptions) though I customized it to 15 team 5×5 OBP. Here is how it looked since you asked! 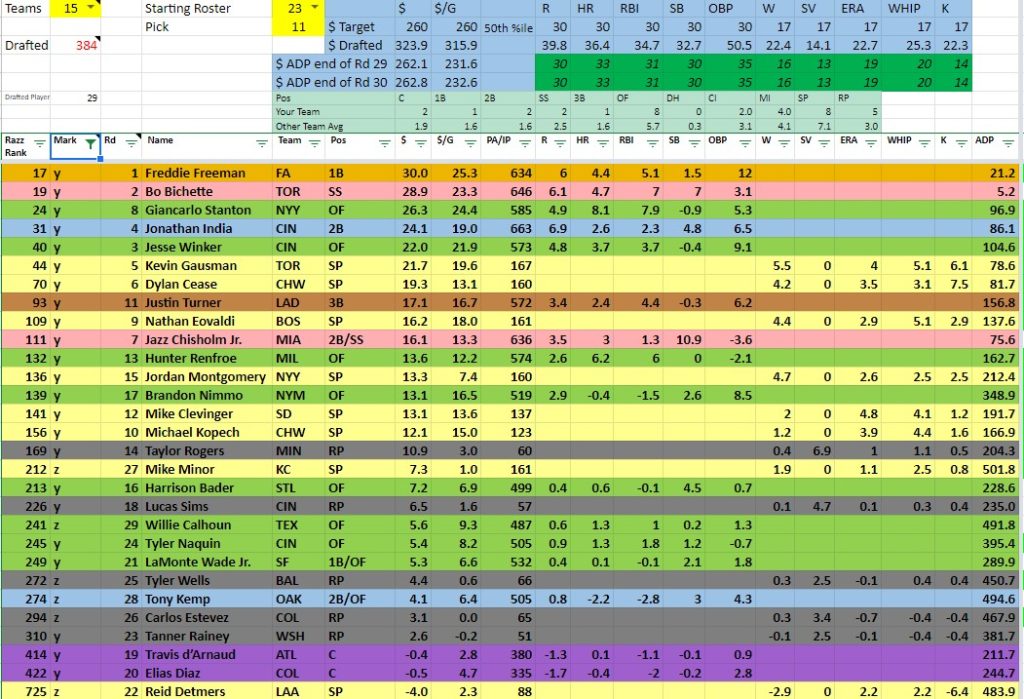 First off, I apologize to any readers about the term “in the red”. I have read about parents who were upset that Pixar’s “Turning Red” referenced periods and it was not a topic they wanted to talk about with their children. While it wasn’t a topic I planned on talking about in this draft review, I appreciate you going with the flow.

As it pertains to your question, if you mean “in the red” as negative, then both my catchers and Reid Detmers were my three picks that qualified.

If you mean “in the red” as more “Who did you reach down your board to draft and why?”, then it is: 1) Chisholm (banked OBP, speed without sacrificing power), 2) Kopech (I like his upside), and 3) Both catchers. I got relievers at near my values.

I always value catchers less than the market. I am willing to pay a lesser premium (usually ~$3 over their non-catcher value vs the ~$8 or so premium that the market will pay) and, if somehow the market overpays the whole draft for every catcher, I am fine grabbing my 29th and 30th catchers off the board. But that never happens. The early catchers may go at the high premiums but catchers in the middle of the draft sometimes will fall multiple rounds. That was the case in this draft where D’Arnaud and Diaz – whose ADP are more like 14th-16 round fell to the 19th/20th round. I jumped on them there as they did satisfy perhaps my one requirement with catchers. I hate AVG (or in this case OBP) anchors. They aren’t anchors.

The fact that these catchers weren’t at the top of the draft board (I still had them valued past pick 400) does make things a bit harder. This is where my pre-draft prep helps and I’ll add notes per round for either player or position targets.

As for closers, this is a recent trend (started a bit in 2020/2021) where the top couple RPs are priced at a premium based on my model (which puts a firm percentage on overall RP draft capital). For 2022, I have had four redraft leagues and the earliest RPs I have taken have been Taylor Rogers and Lucas Sims in the teens. I have drafts where my first RP is the 21st round. My strategy has typically been buy Save dart throws in bulk and hope some hit. I don’t mind throwing volume at the situation in rounds 21-30 because the success rate on bats and SPs is so bad anyway. This is ‘roster churn’ territory and I’d much rather dump a failed closer dart on the first FAAB period than have a prospect clutter that bench spot for 6 weeks.

If there is one piece of advice, develop a multi-faceted plan before the draft for each position + speed using ADP as your guide for ‘the market’.

Can you explain your thought process with Winker in the 3rd? I know OBP, but that seems like a big reach. Then again, you are the 2-time champ!

As you can see in the above screenshot, I had Jesse Winker at #40 on my draft board which is about where I took him. I knew this was well above his 5×5 ADP but he was one of the stronger R/HR/RBI/OBP outfielders after the 2nd round. Below are all the hitters worth $3+ in R/HR/RBI and $8 in OBP. The OBP threshold is higher because I prefer to build that up early in drafts.

Basically, the only two players outside the 2nd round were Jesse Winker and Alex Bregman. I still have some concerns on Bregman. so I had Winker as an attractive target that I did not think would make it back to me in the 5th round. So he was a guy I was comfortable taking there unless maybe a bargain fell on my lap.

Unfortunately, I did not anticipate Jesse Winker being traded from a team home to a wonderful hitters’ park to one of (if not the) worst hitters’ parks in Seattle. While he is still a solid player, he is probably closer to pick 100 vs 40 if I re-ran this board. I stand by the original pick though.

Note: The OBP foundation that early picks like Winker helped establish let me invest in low OBP guys like Chisholm and Renfroe who helped solidify my speed and power.

I don’t see the final roster and/or draft results linked to in the article. Are those available? Thanks!

both are in there. here’s the draft board: https://www.fantrax.com/newui/fantasy/draftResultsPopup.go?leagueId=qatk5hcfl0cq1lkn&type=LIVE_ONLINE&tabId=