Some drafters are more preoccupied with power than others.

No one at the LABR Mixed Draft was as preoccupied by power as I was (well, except fellow Austinite Paul Sporer and similarly weather fucked Oregonian Ryan Bloomfield) thanks to the wintry, energy grid challenged hellscape that was Texas on Tuesday, February 16, 2021.

Luckily, the House of Gamble did not fall so I have only myself to blame if this team does not take down a crown.

As always, thanks to Steve Gardner at USA Today for the invite.

My 5 year stretch of ‘close but no cigar’ performance (3rd-7th place)  in this league went up in flames in last year as I finished 10th thanks to a pathetic 15.5 pitching points despite starting with deGrom/Carrasco (my hitting was 5th with 47.5 points).

I usually would diagnose missteps but, honestly, I am not going to give the 2020 season the satisfaction. Suck it 2020 fantasy baseball.

Congrats to Fred Zinkie on winning the league in 2020.

I get why some colleagues or high-stakes players are cynical towards leagues like LABR. The legacy of calling them ‘expert’ leagues vs something more fitting like ‘analyst’ or ‘writer’ leagues. The fact that inclusion into these leagues – much like the shitty real world – is driven more by industry seniority or connections vs meritocracy. The fact that we are playing purely for pride vs money. The fact there is no such thing as ‘relegation’ if you perform poorly.

Grey and I are wired the same way. We just started Razzball at a time where we were in good position to join LABR and ToutWars when they expanded to Mixed.

That said, we live in a world where NO PUBLIC FIGURES ARE ACCOUNTABLE. Think about every other person who espouses opinions. Are they ever held accountable? I don’t care if your politics are left-leaning or right-leaning. Don’t you hate when a politician or political talking head isn’t held accountable when they were wrong? Or when the Skips or Clays or Stephen A’s were wrong?

Fantasy sports analysts who play in analyst leagues are actually held accountable. I do not know if every analyst feels the same levels of pride and competitiveness as me but playing in a league that publishes standings is accountability. Here is the ToutWars historical leaderboard. If you do not respect an analyst’s competitiveness or competence, then don’t read them. I know I put a lot of stock in an analyst’s historical performance in these leagues but every reader gets to make their choice.

If you want to ‘hate’ on an analyst’s draft or their track record, I am not standing in your way. I may judge your dickishness if you’re a twat about it on social media but that’s a secondary demerit if I agree with your underlying critique, right?

I am all for taking steps to ensure as many people in the industry get a chance to be held accountable in analyst leagues. That is why I have played in and supported TGFBI from the onset (here is their historical leaderboard). Same with our RazzSlam.

I cannot speak for leaguemates but it is laughable if you think I would play harder if I had $100 on the line. You don’t get rich off fantasy baseball. There is no life changing money to be made. I think everyone’s main objective is to win the league vs use the draft as content fodder – some are just better at it than others. There are days where I cannot believe how much I care about this stuff but I do….and I try to use that fire to make all the projections better so we all can kick ass and maybe one day get so sick of winning that we move on to something more constructive.

Last year I christened a new acronym (DARWINISM) to the pile of fantasy baseball draft strategy acronyms. I will summarize/paraphrase below but you can read more words on it in last year’s post.

DARWINISM = Drafting A Roster Which Integrates Needs (of) In Season Management

When I draft, I am the General Manager. I will create draft plans/strategies to simplify my draft day decisions to develop a roster that complements my in-season Manager strengths to maximize chances of team success. Maximizing or ‘winning’ preseason standings is nice but not my main objective.

Some notes on DARWINISM:

Here are a couple of in-season lessons/preferences in the voice of Manager Rudy that General Manager Rudy has incorporated into his draft strategy for 15-team mixed with weekly pickups over the years. I am not saying these are right for everyone. Just know thy self and draft accordingly.

Here are the full results of the 2021 LABR Mixed League Draft. 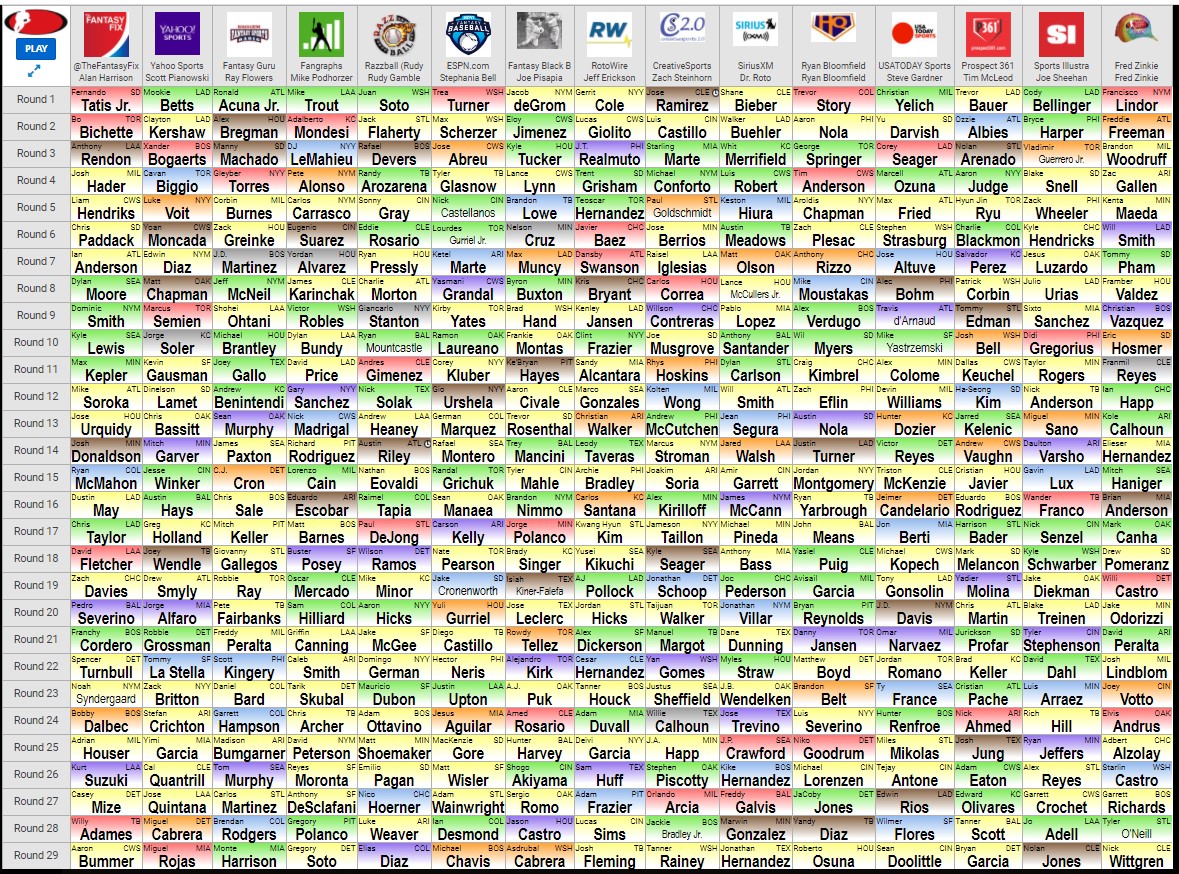 Below are my picks compared with NFBC ADP:

I have used the same post-draft writeup structure for a while now as I find it more interesting than a pick-by-pick analysis and most readers seem to agree. This format does mean I talk more about my competitors’ teams than most post-draft write-ups. I do my best to be respectful yet honest.

I am cautiously happy with this draft. Fielding 9 healthy, above-replacement level arms every week is going to be a challenge this year. I would not be surprised in my pitching staff looks a lot different by the end of the year. Just give me 120 games each of Giancarlo. Please.