It was pretty surreal back in November of last year when Grey told me he had plugged my name for a spot in Tout Wars.  I am always grateful for the support of the Razzball family.  Fast forward to February, I received my official invite and the imposter syndrome really set in.  I said as much in my draft recap back in March.  I also said that once I looked over the league I decided this was a league I at least had a chance to win and if nothing else, could finish ahead of Steve Phillips (yes, the former NY Mets GM) and not embarrass myself.

A dear friend of mine introduced me to viral sensation Elyse Myers months ago and I’ve been hooked on her content ever since.  Doing things scared, promoting mental well-being and compassion, body positivity, and looking through a humorous lens at the world as an anxious introvert…ya, her content is damn relatable.  Myers recently started a podcast, “Funny Cuz It’s True” and her first guest was Paul Feig (Freak and Geeks and The Office co-executive producer).  In that episode, Paul says he’s “confident enough to not be confident”.  I love this expression and I feel like it’s one that I really try to embody.  I’m actually not bad at this silly little game, but I’m confident enough to not be confident, so I went into this Tout League hoping to win, thinking I could, but not expecting a win. 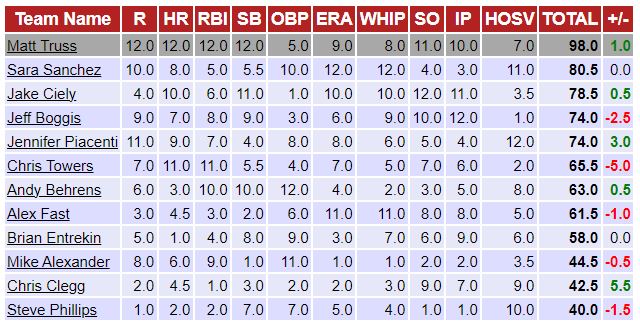 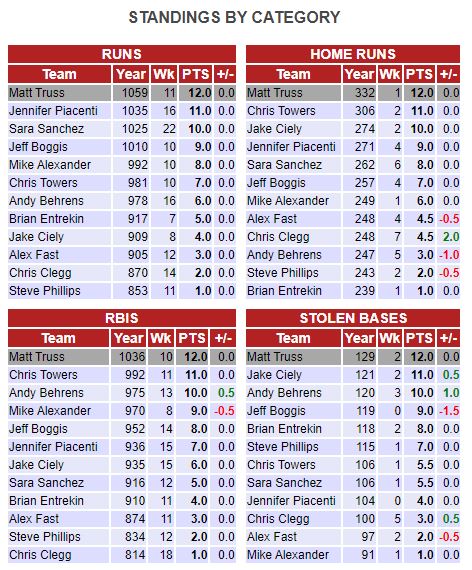 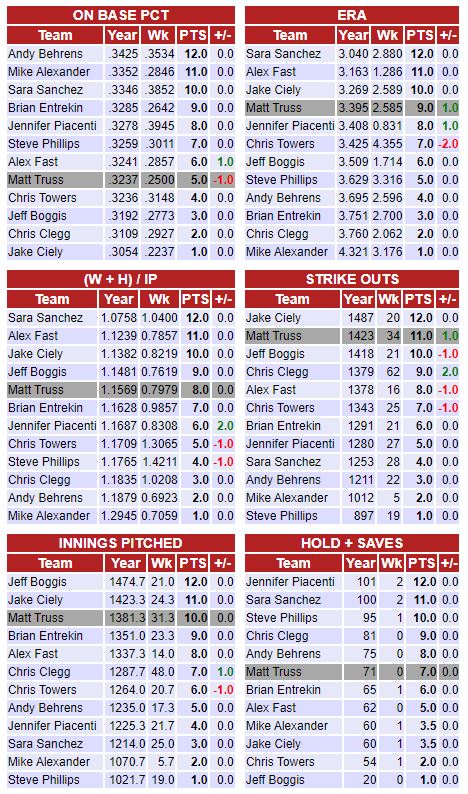 Looking at the final standings, you might think I just ran away with this league, but that was not the case.  I did jump out to an early lead but as the summer progressed, Sara Sanchez and Jeff Boggis were creeping on that lead and Sara passed me for a week or so.  This really made me reevaluate things.  Sometimes you get out to a lead and get comfortable.  Sara definitely didn’t make me comfortable.  At the time I was dead last in stolen bases and second to last in SV+HLD.  I had a decent lead in HRs and RBIs thanks to Pete Alonso, Mookie Betts, and Mike Trout, so I did some soul-searching.  I had a need for speed and thanks to drafting Adalberto Mondesi in round 6 and Oneil Cruz only having a month of action under his belt…the need was great.

After cutting Adalberto Mondesi and recouping some extra FAAB, I placed a huge 181 FAAB bid on Esteury Ruiz…remember that guy?  He was a thing for a whole 30 seconds.  I thought he would be my stolen base savior, filling a need at middle infield and running wild.  Two weeks and one stolen base later…things were bleak.  I channeled my inner SAGNOF in August though, still dead last the final week of the month and barely hanging onto first, I knew this was my easiest source of points and the win.  So, I got to work:

The combination of Jake McCarthy and Bubba Thompson was literally a league winner for me.  McCarthy would go on to steal 14 bags and Bubba would chip in 10 more.  Moore and Siri were gravy at this point as I benched the likes of Ian Happ, Wimer Flores, and Brandon Nimmo for these speedsters and would win the stolen base category outright.  Just living that SAGNOF (Steals/Saves Ain’t Got No Face for those of you who are not privy to Razzball origin story lingo) life…never again Adalberto…I mean…maybe…we’ll see.

SV+HLDs was a unique twist I hadn’t played with before, but it was nice to not pay a premium and waste FAAB chasing Saves.  SV+HLDs drops the price of relievers a ton, so much so that I barely spent on them at the draft, unless their K/9 is elite, there’s no reason.  On 5/9 I was able to nab both Clay Holmes and Ryan Helsley (thanks for the tip, JKJ) for a combined 47 FAAB.  That move proved enormous down the stretch.  I still was a bit behind in the final months due to prioritizing IP (a stat category here) and strikeouts (no wins in this league which also helped!)  Benching a starter for one extra reliever was the difference. I don’t know why I didn’t realize Doval was on waivers sooner or why he was there at all, but his 8 saves from September 5th on helped me boost a couple of points in that category as well.

I can’t say this was my plan all along, but making adjustments in roto is KEY.  Evaluating where you can gain points and adjusting your FAAB and lineup decisions accordingly is the surest path to a top finish.  I can’t stress this enough.  The amount of time I spend staring at the standings page and strategizing where I can gain and/or bring down a team ahead of me is not small.  There isn’t always a Jake McCarthy or a Bubba Thompson there to save your season, but SAGNOF exists for a reason and is one of the easier categories to come back from if needed.  Drafting a balanced team makes these adjustments less extreme at the end of the season, but even if you draft an Adalberto Mondesi, you can still recover.  Looking back at my draft recap article, I said this about my chances:

“The days after a draft, everyone feels like a winner, but I really feel great about this squad.  I need to wrap my head around how the waivers and things work for Tout, there will be some learning curve there I’m sure, but I think I have a shot at finishing towards the top of this league.  Alex Fast has the bullseye on his back and I’m aiming for it!”

Confident enough to not be confident?  Maybe, but regardless, this feels good.

I believe the winner of this league has some input in the funky stat categories for the next season.  Any suggestions?  I think I might just leave well enough alone and roll with OBP, IP, and SV+HLD again.  Thanks again to everyone at Razzball for the support, everyone at Tout Wars for having me, and all my league-mates for keeping the heat on all season (well, except Steve) it was a pleasure!  I fully expect to be mobbed at the grocery store my next time out and to gain at least…a dozen Twitter followers from this win.  Fantasy baseball fame and glory are really something else, huh?

This league is a great argument for just piling on with the best players in the draft/auction regardless of what categories you are already strong in. Your extremely strong batting performance gave you such a lead in the hitting categories that you were easily able to pivot to players like McCarthy and Bubba, and leverage that strength into the SB category. Congrats on a great season.

Thanks, Len! I watched FFB do this same thing last season and finish second overall in the rcls. Just piled on the hitting in the draft and then traded for speed at the deadline while adding free agent speedsters. It’s a sound strategy but takes a bit of luck and timing, especially if it’s a no trade league.

Congrats on your amazing season Mr. Truss! It almost inspires to come back next year. Seriously, great job. You definitely had your eye on some key guys this year, as well as making adjustments (SAGNOF). Glad to see you make it into the Tout Wars scene. And you nailed it!

Thanks, Matt! You know you always have a home around here for whenever you want back in.

Well, glad it wasn’t just us amateurs in the RCL that got steamrolled by Matt … Congratulations!

Congrats on an absolutely amazing season MT! On top of everything else you can teach the fantasy baseball community, I’d love to have a lesson from you on time management and juggling so many labor-intensive teams without letting anything slip through the cracks! Seriously… if you’re ever looking for anything to write about, I’d love to hear about your in-season schedule for how you structure your time for each league and if you have a routine you stick to in terms of how long max you spend on each team each day or week, how you prioritize, etc.!

Oh, thank you so much, Laura! Means a lot coming from you. I really like this idea a lot! Maybe I will add time management to me pre season RCL articles. How to manage 57 RCL teams, haha

Wow Matt! Another title!?!!!! What a season The Hippos had. You should be proud. Winning season-long contests are especially gratifying because of the absolute grind. And you’ve proven that you can grind it out with the best of ‘em. There are no walkover wins especially in these ‘pert leagues you’re in. Enjoy the off-season and now comes the hard part…Repeating as champ! Best of luck and take care!

Exactly, I was gunning for last year’s champ, Alex Fast to start the year so I know the bullseye is on my back now. Thanks again, cobblers! Enjoy the off-season and your ecfbl glory

I wish I could offer suggestions on possible category changes. But I’m boring and bland. I haven’t ventured into OBP or S+H even to offer an educated guess. I dislike both Wins and QS, but IP (or PAs for hitters) doesn’t seem like fun cats to me.

Anyway, I’m certain you are in enough standard, 5×5 that you might want to keep this one the way it is…if for nothing more than a change of pace.

Felt good man! I owe Jake McCarthy a beer at some point.

In Matt we Truss! Congrats on the dub

The year of the Hippo for sure.

Thanks, knoche! It was definitely one of those years. They don’t come often but when they do…Yahtzee!

I checked out the league on Fantrax (since it was the only place I could), and you won there, too! Much closer as you scored a 1 in Sv/Holds and couldn’t get Ohtani into your lineup.

Oh, nice! So I won the draft and hold too, haha

Congrats again, Truss! Damn, you had a good all-around season…

Thanks, boss! It was a story book season for sure

Your success reflects well on all of us here! Well done!

Thanks, doctor! Feels good to do Razzball proud!