Welcome back to another edition of Top Dynasty Keepers.

This week we are going to take a look at two youngsters recently promoted to the majors – Vaughn Grissom of the Atlanta Braves and Brett Baty of the New York Mets.

Grissom and Baty both earned their promotions to the majors thanks largely to the fact that the Braves and Mets were shorthanded at second base and third base due to injuries. The Braves have been without Ozzie Albies at second base while the Mets will be without Luis Guillorme into September and Eduardo Escobar has been banged up and not playing well.

Atlanta didn’t draft Grissom in 2019 until the 11th round as the 337th player selected. Unless you play in leagues with deep minor league rosters, you or most of the other players in your league likely didn’t have Grissom on your radar entering the season.

He certainly wasn’t on the radar of the people who put together rankings lists. Grissom wasn’t ranked as a Top 100 prospect by Baseball America, MLB or Baseball Prospectus entering the season before finally reaching 79th in the MLB midseason rankings.

As mentioned earlier, Baty was also drafted in 2019. However, he was taken off the board 325 picks ahead of Grissom as the Mets tabbed him with the 12th overall pick. Because of his draft slot, Baty has likely been on the radar of most fantasy players. He entered the season as the 39th best prospect by Baseball America, 27th by MLB and 13th by Baseball Prospectus. Before being recalled by the Mets, Baty worked himself up the MLB rankings to 19th.

With Albies appearing to be closer to a return to the Braves and with Baty clearly in position to get a lot more playing time, perhaps more fantasy owners will turn their attention to Baty.

Right now, let’s shine the spotlight on both.

While Grissom wasn’t drafted until the 11th round, one reason was the belief by many teams that he was set on going to play at Florida Atlantic. The Braves took a chance on him and then offered him $125,000 of the slotted salary in that round. Since then, all Grissom has done is hit. The only season he hasn’t topped .300 was his first as a pro in the Gulf Coast League when he slashed .288/.361/.400

One of the youngest players in the majors right now, Grissom does a great job of making contact. During his minor league career, he had only a 13.4% strikeout rate while walking 9.6% of the time. He has a very nice, simple swing which allows him to barrel the ball as he has displayed decent power in the minors, and his first major league homer was one to remember. 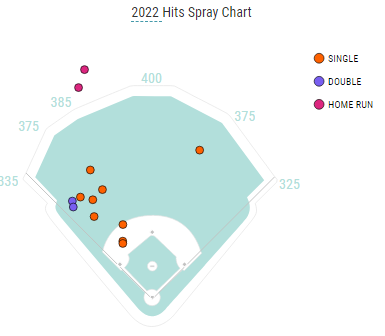 Right now Grissom is a heavy pull hitter, hitting the ball to left field 64% of the time. His third home run of the season Saturday night was pulled down the left field line before getting a single to right-center.

It will be interesting to see how Grissom adjusts once opposing pitchers adjust to how he is currently pitched. But it probably won’t matter much as Grissom’s swing and approach will lead to success at the plate no matter what.

Once on base, Grissom is a threat to steal second. He had 27 steals in the minors this season and during his minor league career has racked up 46 steals in 227 games.

Just What Is His Future?

The question concerning Grissom’s future isn’t about his hitting. It is where will he play in the field. He has played mostly shortstop and third in the minors and is at second right now with Atlanta. However, with Albies and Austin Riley signed to long-term deals, the Braves are set at those two positions for years. If Dansby Swanson signs elsewhere during the offseason, then Grissom can take over there or second if Albies slides to short.

But if Swanson re-signs with the Braves, it leaves Grissom on the outside looking in when it comes to a full-time position.

Baty may have been drafted higher in the first round if not for the fact that he was 19, old for a graduating high school player. The Mets weren’t scared by that and have been more than happy with their decision.

The scouting grade for Baty’s hitting and power is both 60, and both have been on display during his career. In his first full season of professional ball, the 6-3 lefty-hitting third baseman slashed .292/.382/.473 across two levels with 12 homers and 56 RBI. This season he slashed .315/.410/.533 with 19 homers and 60 RBI in 95 games at Double-A and Triple-A. He wasted little time showing off his home run stroke by knocking a dinger to right field in his first professional game.

Can The Power Increase?

The Mets firmly believe Baty will add even more strength to fill out his frame. And his power numbers have been good in the minors. But Baty will have even more homers and certainly more extra base hits if he can change his launch angle. During his minor league career, he has around a 50% ground-ball rate.

Baty also has some swing-and-miss in his game as shown by his 25.8% strikeout rate in the minors, though that is hardly a horrible percentage. And he has shown patience at the plate as evidenced by his 12.6% walk rate.

His Position Is Known

Unlike Grissom, there is no question where Baty will play in the future. While he has played left field at times in the minors, the large majority of his games have been at third and there really is no one at that position to block him. While he did struggle at the position early, he has become more than adequate at the spot and can be long-term solution at the there for the Mets.

Both players are certainly top dynasty keepers. That really isn’t the question. What probably has to be asked is who will have the best path to playing time.

Grissom will likely lose playing time once Albies returns. The Braves, however, could turn to using him throughout the infield, allowing Riley, Swanson and Albies to get games off with Grissom playing in their spot. Grissom’s future in for next season and beyond won’t be known until we see what happens with Swanson. If he decides to re-sign with the Braves, that means the three spots Grissom plays will be filled.

However, I easily see Grissom becoming a modern Ben Zobrist by playing all over the infield, and he is athletic enough that he could also pick up playing left field. A utility player with his potential is a great keeper.

Locked In At Third

Unless Baty is totally overmatched during his run at third with the Mets this year, I fully expect him to take over the role next season. He’s shown what he can do in the minors and really doesn’t have anything left to prove.

The Mets can certainly spend the pile of cash they have for a third baseman in the offseason, but I just don’t see that happening. They have invested in Baty and want to see what he can do, and I see him being a 25 homer guy for the Mets soon.

But if I had to pick one player, I currently would go with Grissom. I love his hit skill, he can hit for some power and he has speed. The fact I think he will be a multi-positional player only helps his stock.

In NL only I’ll have Grissom, Cruz and Lindor. I also have Croenworth, who, it sounds like Grissom may become (I think Braves let Swanson walk though). Keeping Lindor seems a no-brainer. Who do I try to trade?

Nice problem to have. Grissom, if traded now, will bring in a nice package because he’s hit.

For the future I keep Lindor and Cruz as I live his power potential and it’s just unknown where Grissom will play – or how much. I’m of the opposite view when it comes to Swanson. I think he sees what Atlanta has built and will want to stay.