Welcome to another weekly recap of your Razzball Commenter Leagues. I’m Jay, your host. Also, I’m known as Admiral Obvious, since my intro basically promoted me from Captain. Questions remain though, like, for instance, what kind of hat should I wear? Also, do I still have a ship? Or is this, like, an armada situation? More ships the better, but then, wait, what about all the decisions after that? Do I want pirate ships? Or maybe aircraft carriers? Wait a sec… I should get a aircraft pirate carrier full of parrots, swashbucklers, rail-guns, and Somali’s. Wait, that doesn’t sound as cool as I thought it would. And I might have just described the plot of Captain Phillips. So yeah. What were we talking about again? Oh, right, RCL’s. Let’s just get to this week’s theme, and that’s trades. More specifically, this is pretty much a lede that allows me to talk about some of the interesting trade offers I’ve received in my 10 RCL’s. And apparently, also to talk about pirates on aircraft carriers. I love this job.

So while this focus’ primarily on my teams, and my leagues (which still encompasses 90 different people, which seems cool when you think about it. Like I should start my own religion, because tax breaks bro), I want you to be involved as well. If there’s something ‘trade-wise’ you’d like to share, go forth and use the comment section. In the mean time, here are some offers I’ve received, and while I will keep the other team’s identity private for the sake of the fact that it’s never wise to tough-talk your own readership, I will say that some of these offers are… fascinating? Yeah, fascinating. Perfect descriptor.

My Jose Abreu for their David Price — This was May 7th, and even if you offered me this today, I don’t see how you could do it. Don’t get me wrong, I like Price, and I think he’s going to regress as the season moves along, but, sans the DL stint, Abreu has been a top-10 hitter, arguably top-5. I just don’t see any reason to sell at this Price. HAHA, get it? You knew it was coming.

My Jose Abreu for their Hisashi Iwakuma — I kinda get it. Based on the offer above, I’m sure non-Abreu owners are hoping that there’s perhaps some doubt in Abreu’s skill-set. Even then, anything less than a top-15 pitcher seems unbalanced…

My Giancarlo Stanton for their Andre Ethier and Jered Weaver — LOL.

My Giancarlo Stanton and Koji Uehara for their Nick Markakis, Buster Posey, Junichi Tazawa, and Jon Lester — Ah, yes, the beauty of the chump dump. The strange thing is, at first, you’re like, eh, that’s not that bad of an offer. Until you realize you could easily drop Markakis and Tazawa and pick them back up a week later. So it comes down to Lester and Posey, which shouldn’t be enough to land Stanton without Uehara, much less with him.

My Chris Davis for their Jon Lester — Again, this is a good thing to try and do, sell-high, buy-low. Always encouraged. But you just can’t do this if you own Davis. Obviously, their seasons’s so far have been diametrically opposed, but it’s still not close for me.

My Giancarlo Stanton for their David Price — Nope.

What are some of the RCL trade offers you’ve see out there? TELL ME EVERYTHING. 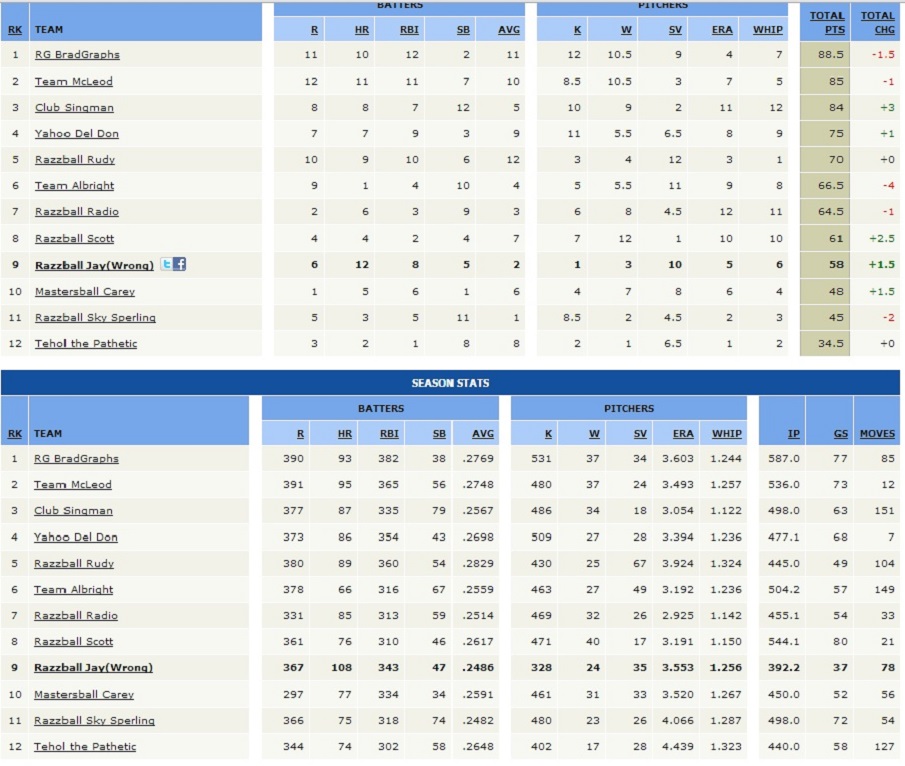