I’ve been running out of ideas for titles but this one was a slam dunk. I have said many times before that I’m a huge Steely Dan fan. They are one of a few artists to ALWAYS soothe this beast and take me to a good childhood place. But hey, enough about me, I want to talk about you, but not all of you. The “you” I can’t talk about is the top 20 overall. Due to some computer issues, we don’t have an updated master standings this week. Sorry guys… and girls, we will hopefully have them next week when Rudy returns from his vacation.

Before I move onto the RCL data, I wanted to talk up our Razzball day at the Angels game one more time. Below is my rather poor attempt at combining two pictures, sorry for the pixelation. Below is Grey and myself sporting our sweet new Razzball shirts. To show you how much I want this to be about you… and Grey, I cut my face out so we get Grey times three! If you want to buy one, let me know in the comments. To the right is Teddy Heater, with Hector Santiago (I think?), walking off the field after he threw out the first pitch. Damn our boy can throw. So proud how hard Teddy represented Razzball with his sweet jersey. I had a nice chat with Teddy about today’s topic: the RCL’S. In his first year he has really picked up on the strategies and was already talking about next years draft strategy. You guys… and girls should try to play an RCL with Teddy next year. 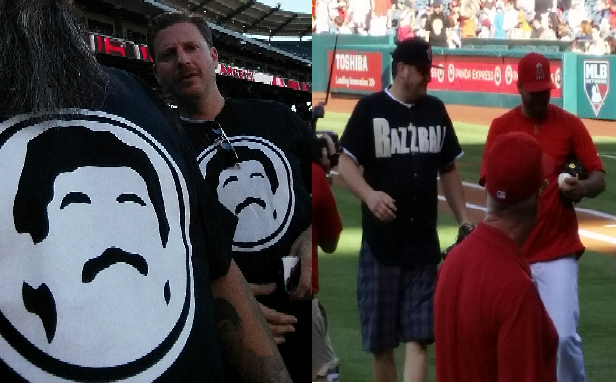 What a monster K week for the Nine Pound Hammer. That is the most K’s in a week all season. I didn’t see them in the top pitching teams that Vin assembles so I must assume the rest of the numbers didn’t go as planned. Oh well, he still got his name in a post. The rest of the weekly leaders was pretty standard fare and as always I tip my cap to you…because I’m not on the list!

TOP OFFENSIVE PERFORMANCES OF THE WEEK

TOP PITCHING PERFORMANCES OF THE WEEK

Three tables down, three to go. The rule of three kicks in here because we have just enough stats that are comparatively relevant and won’t turn this into over-kill. Below are tables for the top leagues in Runs, RBI’s, HR’s, SB, AB’s, IP, K’s, WINS, and SV’s. I have mentioned in the past about the importance of innings pitched and at bats to compete at a high level. For those that missed those discussions or have been living under a rock, I’ll go over them again. On the pitching side you want to stream over half your starts and utilize good middle relievers. On the hitting side maximize at bats by embracing batty calls. The Hitter-Tron is great for that. You achieve all this by keeping a handful of fluid spots on your roster all season long.