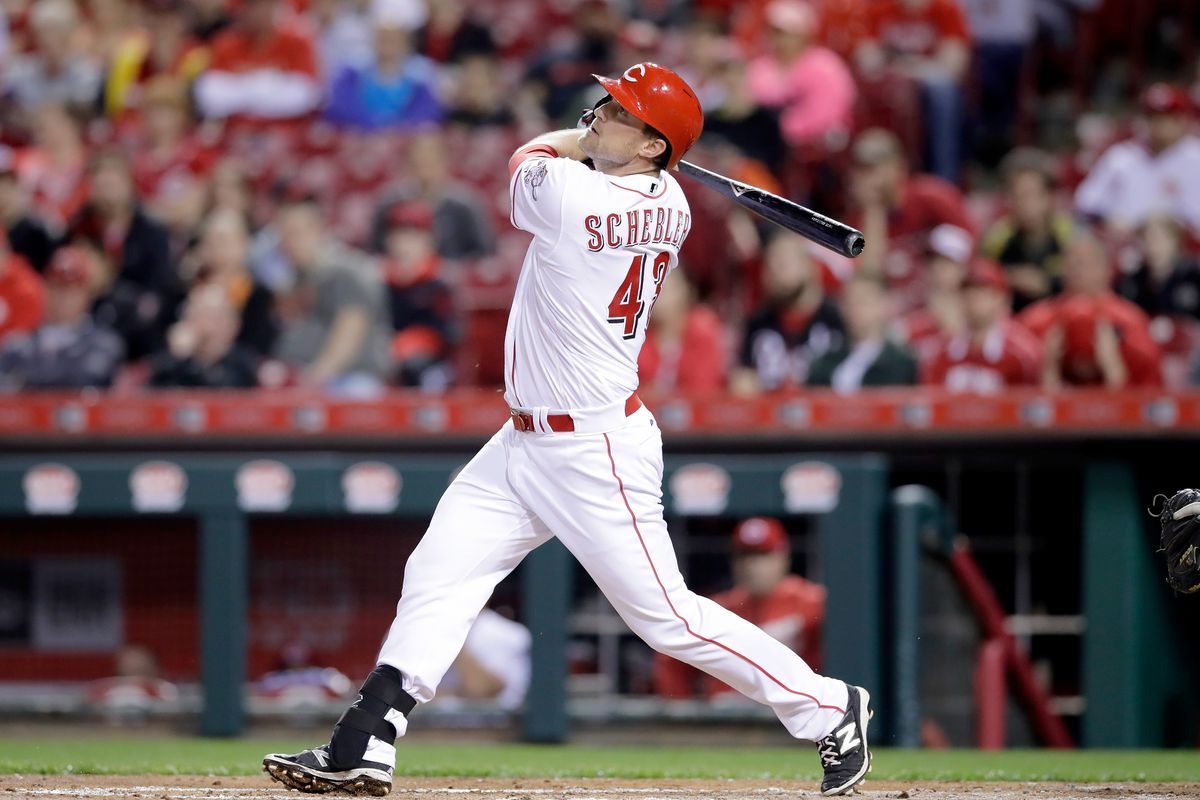 Heck yes we’re going to talk about Scott Schebler today! To be exact, I’m going to write, and you’re going to read but let’s not start by splitting hairs right off the bat. Now where was I? Oh yeah, Scott Schebler. The 27 year old, coming off a 30 homer season, has legit power (the 30 homers told you that, duh). Also minor league seasons of 27 and 28 jacks. Go on, you say. So let’s dive in.

Drafted by the Dodgers in 2010 as the 802nd overall pick (who doesn’t like to see a dude taken that late do well?) Schebler worked his way up through the minors finally reaching the majors in 2015. He didn’t stay in LA long (sad trombone) and was acquired by the Reds in 2015 at the trade deadline along with Jose Pereza (who I am not a fan of, in case you were wondering) in a three team deal that saw Trayce Thompson wind up on the Dodgers and Todd Frazier to the White Sox (who thought they were winning something that season).

You know what though? Looking at the bright side is so much better. While last season he ended on a downer he also hadn’t played in as many games as he did in 2017, had the shoulder injury and the Reds stunk so I’m going to give him the benefit of the doubt.

Furthermore Schebler’s ISO in those seasons: .285 & .276 (which is good). His ISO on the whole last season: .252. Also good. Hitting in the 4th or 5th spot in the lineup? Even better for those counting stats. This season he’s dealing with an elbow injury, leading to his below average ownership. He has legit power and whenever the juiced ball era ends I want to be owning him like a hot potato. In RCL leagues (where the real players play) he’s owned in 58% of leagues, Yahoo! 19% and ESPN 18%. For a waiver wire free agent a guy that could finish as a #3 OF is worth it.

Quickly: Michael Conforto. Hopefully you drafted him everywhere like we talked about because he’s back only a few games into the season, hit a homer while I wrote this, and is going to be an all-star this season. Go trade for him even. You want to know another guy I’m trading for everywhere? Well I’m going to tell you anyway, you’ve already read up until this point, so if you’re willing to go a little farther…Avisail Garcia. Not super exciting I know, but he was going late in drafts, should be 100% owned in RCL leagues (he’s at 92%), 74% in Yahoo and 77% ESPN.

Lastly: I was watching the A’s and saw Rickey Henderson in the dugout with his official title “Assistant to the President” and, for a split second thought he was advising Trump and thought maybe Rickey’s going to replace Scot Pruitt at the EPA because Rickey was on the Yankees back in the eighties and I bet him and Trump partied together.  Then I thought how many times the Oakland A’s broadcasters bring him up during the game, putting the over/under at 2.5; same as and the mentions of Moneyball I bet. Lucky me on Sunday I’m going to see the A’s play Ohtani and the Angels; I’ll let you know how that all goes next week!