THE BEST OF TIMES

The year was 1996. The “Macarena” craze had just swept the nation, Independence Day was dominating the box office, Bill Clinton was about to win re-election, and 10 year-old Torres was already sporting a full-grown mustache (those damn Puerto Rican genes.) Even with the mustache, life was pretty good for  me back then. It was made even better when the Yanks won the World Series that year, clinched on this catch by none other than the great Charlie Hayes. 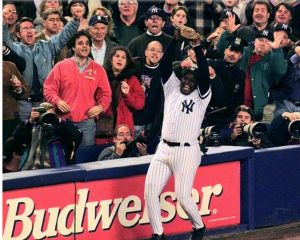 Me and my mustache felt like we were on top of the world when that ball landed in Hayes’ glove. Charlie Hayes went on to play another 5 years in the league, bouncing around to several other organizations as a part-time, defense-first third baseman. If you asked Charlie, he would probably say that the catch in ’96 was the pinnacle of his career. Though he was not a superstar, Charlie Hayes thankfully reproduced and had a son who, based on the early returns, might end up fitting that description.

The number two ranked prospect in the Pirates’ organization, Ke’Bryan Hayes made his debut in September of 2020 at the age of 23, hitting an impressive 5 home runs to go along with a .376 average and 1 stolen base in 95 plate appearances. Ke’Bryan unexpectedly displayed elite quality of contact in that small sample, as he had a 55% Hard-Hit rate, to go along with a 9% barrel rate. Hayes’ hot start with the bat quickly bumped him up to the 2-hole in the Pirates’ batting order, where he would stay for the remainder of 2020. That level of offensive production was unexpected for the young Pirates’ third baseman, as his main carrying tool as a prospect has always been his elite glove. In a 2019 interview with Sports Info Solutions, prospect guru Eric Longenhangen gushed about Hayes’ defensive abilities. “Hayes is one of a handful of players who we have evaluated as plus-plus future defenders, Longenhagen said. “Really hope that power comes, we have ranked him 13th overall in baseball just because we anticipate at some point there will be an offensive impact as well.”

Well, we saw the offensive impact in 2020 but the question now is whether Hayes’ offensive production last year was a true step forward with the bat or just a small sample outlier. Listen, the dude isn’t going to have a .450 BABIP again, meaning the batting average will obviously come down. While he may have gotten lucky in that department, it’s important to note that Hayes’ contact skills were very solid, as he posted a 28.5% O-Swing and 83.6% Contact rate in 2020. The fact that Ke’Bryan displayed these kinds of plate skills in his first big-league stint is certainly an encouraging sign. Also encouraging is the 76th percentile sprint speed, which led Baseball America to predict that Hayes will be “capable of stealing double-digit bags each year.” While the speed is not in question, the sustainability of that power is.  Hayes only hit a total of 30 home runs in 1,991 plate appearances across three minor league levels, making that .301 ISO he posted in his 95 major-league plate appearance stint seem like a bigger outlier than the one time 10-year-old Torres successfully spoke to someone of the opposite sex.

Okay,  enough with the numbers and advanced metrics. I could sit here and continue with the statistical deep-dive by telling you that Hayes had a 26.6% Dynamic Hard-Hit Rate, a .426 xWOBACON, and a 35.4% Sweet Spot percentage. While that sounds cool, does any of it really mean anything in that small of a sample? Does anything we do mean anything (there you go with that existential anxiety again, Torres.) Listen, I just worry that we’re going to overweight this incredibly tiny sample and improperly value guys like Hayes heading into 2021. What if Hayes had come up in September of a normal 162-game season? More than likely, he would be everybody’s favorite “sleeper” heading into 2021 but would be going several rounds later.  But because every game of the 2020 s***-show was overly magnified, we actually paid attention and noticed that Hayes had an awesome September, which has probably led to his price being overly inflated.

According to NFBC Draft Champions data since December 15th, Hayes is being taken as the 16th third baseman off the board, right in the middle of a Matt Chapman/Kris Bryant sandwich at third base. There hasn’t been too much helium in Hayes’ price, as his ADP has mostly hovered around the 130 range since October (believe it or not, there are truly sick people like me doing fantasy baseball drafts in October.)

The 2021 Razzball Steamer projections have Hayes penciled in for 18 home runs, 9 stolen bases, and a .278 average, while  The BAT X projection system by Derek Carty has the Young Buc going for 16 home runs, 9 stolen bases, and a .269 average. Plugging those BAT X projections into the Fangraphs auction calculator, Hayes would grade out as the 15th-most valuable third baseman in a 12-team format, which is about in line with where he is going in early drafts. Is it possible that this projection is selling Hayes short? Possibly, as I would take the over on the steals due to the fact that I’ve heard several knowledgeable prospectors predict closer to 15 steals for Hayes over a full year. Even an increase of just 5-6 steals would obviously have a significant impact on Hayes’ fantasy value.

As mentioned earlier, Hayes was bumped up to the 2-hole in the Pirates’ lineup and it’s likely he will begin the season there. Given his elite defense, it’s fair to assume that Hayes will be playing nearly every day. But how valuable is it to hit in the number 2 hole of that dreadful Pirates’ lineup? Hayes would probably be better off hitting 9th in the Blue Jays lineup at this point. I actually just took a look at that the Pirates starting 9 on Roster Resource and let’s just say that it’s more cringe-worthy than this picture of Alex Rodriguez in a facemask. 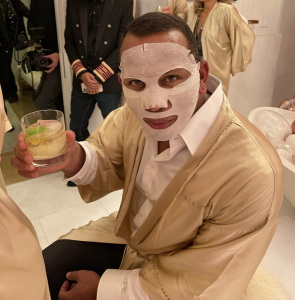 Getting ready for the Inauguration…or a Satanic ritual

I’ve already had several A-Rod-related nightmares since seeing this picture and my concern is that if I draft Hayes, I’ll also have nightmares of Ke’Bryan hitting 15 home runs with 17 RBI in 2021.

My original title for this article was Ke’Bryan Hayes, exciting. No question mark. But the more I thought about his fantasy outlook for 2021, the more I began to think that we may be getting a little ahead of ourselves with the Ke’Bryan Hayes love.  Bottom line is that I’m passing on Baby Hayes. Here’s my third base strategy: Target Jose Ramirez at the the end of the first round and if I miss out on him, go after my boy Eugenio Suarez around pick 80 (did you know Suarez is 2nd in MLB in home runs from 2018-2020?) If I don’t get either J-Ram or Suarez, I’ll wait until around pick 200 and take a chance on Austin Riley, who took a step forward last year and is getting some love from the projection systems. I’m probably not taking Hayes as a corner infielder either, as there’s several first baseman going in the later rounds who I’ll be more than comfortable plugging into that spot (looking at you, Mr. Votto).

Listen, I recognize that you may think differently than me. Maybe Hayes is a must-target for you because you had Charlie on your team during his breakout 1993 season with the Rockies and you think Ke’Bryan is likely to replicate that. That’s fine. My advice to you in that scenario is to pair Hayes with an upside power bat like Riley if you’re in a shallower league or even with a guy like Edwin Rios in deeper leagues. I think Hayes’ floor for batting average and speed is fairly high; however, I do worry about his potential downside in the home run department. If Ke’Bryan’s power numbers revert to minor-league levels, you may be looking at around 15 home runs from your starting third baseman and that just isn’t going to cut it, y’all. The only scenario where I’ll be actively targeting Hayes is if I’m in a Roto league and I missed out on my stolen base targets earlier in the draft.  Again, every little bit of speed matters and Hayes’ 10-15 steals at 3B could be a nice boost for your team in that scenario.

Don’t get me wrong, Ke’Bryan Hayes has an exciting future. Sometimes players flash elite skills early on and they quickly develop into all-around superstars. My mustache is a perfect example of this. It flashed at a young age, continued to develop, quickly turned into a goatee, and now it’s a dynamic, perfectly manicured beard. Those who draft Ke’Bryan Hayes in 2021 can only hope that Hayes follows the same career trajectory.