I already went over a Josh Hamilton overrated post, but I guess people were off reading his inspirational autobiography, “Baseball Between the Lines.”  So I brought out the pirated Photoshop for a quick, “Don’t make me come back there!”  Okay, this wonky .jpg is a bastardized Hype Cycle.  If you don’t know what a Hype Cycle is, it’s because you didn’t go to Harvard.  Don’t worry, neither did I.  If I had, you would’ve heard about it a gazillion times.  A hype cycle is this thingamaboob that tells you the life cycle of hype for certain technologies.  Or technologiez, if you’re under 14.  Now I took this thingamaboob and I reinvented it for Josh Hamilton and the schmohawkian hype that is following him around as we head toward your 2009 fantasy baseball draft day.  So let’s break down this Josh Hamilton fantasy baseball .jpeg-a-roo-ski into the different stages of hype, shall we?

No More Crack Smoking – This stage in the Josh Hamilton hype cycle is more or less self-explanatory.  Josh Hamilton stops smoking crack.  As he continues up the curve, he gets near 100 RBIs by the 2008 ASB, he stays healthy and he helps a giraffe give birth.  The last one is still unverified.

2009 Drafts – The peak of the hype.  Everyone goes caca-cuckoo over Josh Hamilton in the 2009 preseason.  One woman from Lubbock, Texas calls in to the Vatican saying there’s an image of Josh Hamilton on her toast.  All of this leads to Josh Hamilton being severely overrated and he’s drafted in the 1st round of some 2009 drafts.

Falls back to Earth, Hits the DL – Sometime during the 2009 season Josh Hamilton fails to live up to the hype and his owners wonder where it all went wrong.  Then he gets hurt.

He’s a solid OF, but not Jimmy Jesus – At the end of the season, fantasy baseball owners look at Josh Hamilton through slightly less than rosy glasses and come to the conclusion that he’s good, just not a 1st or even 2nd rounder.  He’s Jason Bay’s numbers with a feel-good story attached to his name. 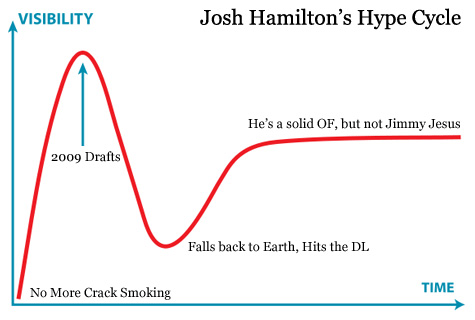