The 2020 season was an adventure for several reasons.  However, there were still breakouts and breakdowns across the circuits.  It is always much more fun to talk about the young upstart that represented a draft day gamble that paid off, while it is much more likely that identifying the early season pickups will win the day (or league).  We are not talking about predicting that Christian Yelich will rebound from a rough 2020 as a bounce back.  Anybody can make those calls.  The real winners find diamonds in the rough that have been cast off and left for dead.

A few weeks into the season is a great time to find waiver wire gems to plug the holes in your draft strategy or react to the injury bug.  In today’s hitter profiles column we will look at some names delivering early season value after abysmal 2020 seasons. and make the call on whether we should buy or sell them for the long haul.

2020 was a wasted year for Eduardo Escobar after slugging 35 home runs in 2019.  As of Thursday evening, Escobar had already surpassed his home run total from last year with his 5th long ball of 2021.  After starting the season 1 for his first 21 plate appearances, he certainly has shown glimpses of that power hitter that we hope he can be.  Should we invest?

Sell: Escobar’s exit velocity is down, his hard hit rates are down and furthermore the strikeouts are up.  Shall I continue?  While we are still very much in small sample size space, pitchers are also peppering Escobar with more breaking balls than ever.  There really isn’t much to see here, which is disappointing for a player that was a fantasy fixture just a few seasons ago.

After a disappointing exit from Milwaukee following a dreadful season in 2019, Shaw tried to revive his career north of the border.  A disappointing .239 average and 6 long balls across 50 games in 2020 did little to restore faith that Shaw would be an asset heading into the 2021 season.  Through only 11 games this season, Shaw has produced nearly half of the counting stats of the prior season along with a respectable .297 average.  So, do we buy or sell?

Buy: Shaw has seen his K rate drop noticeably in the early going from nearly 28% in 2020 to under 20% this year.  While still early, the plate discipline is closer to his early Brew Crew seasons.  I would not expect 30 home run power and 100 RBI, but a corner infield spot in the fantasy lineup is reasonable for Shaw during the 2021 campaign.  I have added a few shares and will be watching the plate discipline improvements closely. 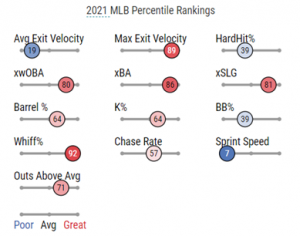 While it may be a stretch to say that Mullins had a down year in 2020, that has more to do with his lack of career fantasy irrelevance than an off-year.  Out the gate in 2021, Mullins is hitting a scorching .442 with a couple of steals atop the Baltimore lineup.  So what is the verdict on this Oriole?

Sell: While the start has been hot, he has amassed a whopping 2 runs batted in with a single homer.  It is quite unlikely (duh) that the .500+ BABIP stands up considering his max exit velocity is down in early 2021 and barrel rates remain at his career level.  While Mullins might be advancing as a major league hitter, he should remain on the waiver wire for the foreseeable future.