What is up everybody!? It’s the pre-season reunion here at Razzball, and we’re coming back strong as ever to deliver you the hottest takes, the slippery-est snakes, and a crap-ton of Grey’s quality bakes. What? The guy likes to bake! But for cereal, if Grey ever offers to send you bear claws, don’t take him up on it! The Chinese authorities have been all over me after Grey mailed me a package of ursine talons. ENYWHEY. I’ll repeat this again when we’ve moved from January Grey into March Grey, which is not to be confused with the Greymarch for all you Elder Scrolls fans: Yours truly has taken on an editorial role across the baseball and football sides of Razzball. What does that mean? It means my deadly red cursor of editorial prowess will grace these digital articles for the foreseeable future, which is pretty foggy right now admittedly. Thanks be to Grey and Rudy and Donkey Teeth for entrusting me with the “Schedule” button, and I hope to introduce you to some solid new writers while welcoming the familiar Razzball crew that you know and love and definitely wouldn’t want to see star in Bridgerton. While we collectively wait for the start of the 2021 MLB season, let’s gather for some pre-season hype pieces and get ready for drafts.

Corbin Burnes: Deal or No Deal?

I’ve got early access to rankings from Razzball (early access to Grey’s rankings are available via the Patreon, and Rudy sent out early access to his rankings for subscribers) and there’s one pitcher that I’m not seeing enough hot taeks on, and that’s Corbin Burnes. Because when I load up my Twitter machine, I want my palms to get sweaty and my gut to feel butterflies about seeing balls flying out of the zone. Whew. Maybe too much Bridgerton late at night.

This article is inspired by two things: A) I — and basically every other ranker — completely whiffed on Burnes last year…but that’s OK because everybody was whiffing on his stuff…and B) he could be a flaming pile of fits for your fantasy team.

Why did everybody whiff on Burnes in 2020? Because in 2019, he was downright hideous. In 2019, the Brewers let Burnes break the rookie threshold, and over nearly fifty innings, he put up an 8.82 ERA with a 6.09 FIP. Yuck. Batters crushed his primary pitch — a fastball — with a 1.283 OPS, a .386 ISO against, and a .520 wOBA. Don’t know what those numbers mean? I already told you it means “yuck!” So, when Burnes got the call in 2020 to join the big leagues on a dismal Brewers team, most rankers and analysts completely ignored him.

Now, here’s a little fluke about algorithmic ranking using regression: it’s really good when looking at established pitchers with established repertoires with plenty of track record. However, when you’re looking at a pitcher who had a disastrous 2019, and completely changed their pitching repertoire the next year — which happened to be pandemic-ridden and a complete crapshoot for pitchers — you’re going to get some wonky results. While the analyst community is debating about how much to weigh 2018/2019/2020 stats in predicting 2021 performance, Corbin Burnes is kind of immune to all this discussion. The pitcher he was in 2020 was not the pitcher he was in 2018 or 2019. If only all of us could leave our mistakes in the past so easily!

So, Steamer — as much as I love it — sees Burnes as a pitcher destined for a 4.15 FIP. OK, that’s a floor play. But there’s also a fair selection of outcomes where Burnes could be much more valuable than his algorithmic projections.

In 2020, Corbin Burnes finished as the #10 starting pitcher on the Player Rater. Because you could have picked him off the waiver wires, he represented the greatest value for any fantasy manager to roster in 2020 (with Luke Voit being the arguable competitor). Of the impressive stats that I listed in the previous section, I omitted the best stat (it’s like I’m throwing a plot twist at you!).

Corbin Burnes’ slider had the third best wOBA of any pitch thrown at least 100 times in 2020, with batters getting on-base at a .107 clip. When the slider appeared, it landed a strike 65% of the time, which was 4th best of any pitch in the league in 2020 with the same usage criteria. Moreover, nearly 30% of those strikes were swinging strikes; as the image from Baseball Savant below demonstrates, Burnes’ slider tended to land way outside the zone. 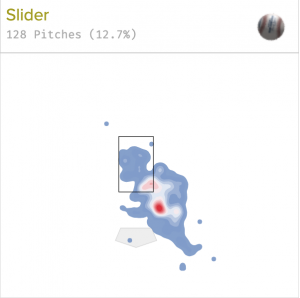 Burnes threw his slider a meager 13% of the time in 2020. However, for a pitch that he threw only 13% of the time, he got 22% of his strikeouts on that pitch. Again, he was undergoing a full remodel on his pitching repertoire, hoping to save his career from the nearly 9.00 ERA debacle of the previous year. He focused mainly on honing his new main pitches — the sinker/cutter combo — to great success.

In early NFBC drafts, Corbin Burnes is taken as the 18th starter off the board at the time of writing, with an average overall draft position of 58. Lance Lynn, Dinelson Lamet, and Hyun-Jin Ryu are all going later than him…and they’ve all out-performed him in longer stretches of play. 2021 should, by all reports, be a full season, and Burnes hasn’t topped a combined 140 innings pitched in any of his major/minor years. In fact, he’s thrown only 130 innings combined since 2018. And, well, the Brewers aren’t going to be all that good in 2021. The Brewers finished 2020 as the 25th team in wRC+, meaning they didn’t generate a lot of offense to support their pitchers. With a month to go until pitchers and catchers report in 2021, the Brew Crew seem destined to bring back most of that weak-hitting offense in the hopes that the likes of Christian Yelich and Keston Hiura will combine with the well-rested Lorenzo Cain to gain some more runs. With the Brewers’ minor league system mostly out of steam, there doesn’t seem to be a lot of reinforcement on the way for a longer season. These intangibles could cap Burnes’ wins and IP over the course of the season.

Additionally: small sample size syndrome. I’m getting pumped over a pitcher that made 9 starts in a pandemic-ridden season with limited exposure to opposing teams. He faced the Pittsburgh Pirates twice, the St. Louis Cardinals twice, and threw a gem against the Detroit Tigers. In other words, Burnes didn’t face elite hitting in half of his starts. When he faces tougher hitters who have had an off-season of video study, Burnes could find himself in trouble again similar to 2019. If you’re June Grey — who wears one of those southern-belle hats you see at the Kentucky Derby — you’re dropping Burnes if he’s fulfilling that 4.15 FIP projection as the second starter on a team that seems destined for a top-10 draft pick.

In best ball leagues, I’m happy being all-in on Burnes. His upside is phenomenal, and that’s what you want in best ball. I’d prefer him to be my third starting pitcher in that format, but I’ll giggle with aggressive glee if he’s my second starter. Of course, I’m limiting exposure on Burnes because he’s got a range of outcomes that mimics Brad Pitt’s acting performances, from magnificent to embarrassing.

In head-to-head formats of 8-to-10 teams, I want him as my 4th pitcher: I want strong, known quantities before Burnes. Give me my bearded warrior, Lance Lynn.

In 12-team or larger leagues, I’m happy to settle for Burnes as an aggressive #2 SP, as long as I make sure to reinforce the back end of my rotation.

If Burnes’ 2020 usage and performance roll over to 2021 and we see an increase in the use of his slider, we’ll be talking about another top-10 fantasy year. However, with so many limits on his ceiling — the poor 2019 performance and the weak Brewers team — I’m not thrilled taking him as the 58th overall player. I would much rather grab Lance Lynn or Hyun-jin Ryu at that point in the draft.

Where have you been seeing Burnes go in your drafts? Drop me a line below! And, welcome back for the 2021 fantasy baseball season!

DOC!! Well done and congrats on new gig! Except for the slander on Brad Pitt…..

I’m not coming over to watch Mr and Mrs Smith with you, Son!

I’m out on Burnes outside of Best Ball or an unrealistic fall down H2H draft boards. The Crew sucks and I just gotta see more from him. He rekt subpar competition. Neat, bro. Glad you could whoop up on PIT twice, STL twice (I know all about those awful bats), KC, and DET.

Yeah, it’s tough to get *real* excited with his stellar performance coming from beating up on teams that were complete disasters. However, if studying “the nature of fantasy sports” over the past year has taught me one thing, it’s not to discount strength of schedule too much. Certainly it plays a role, but it’s not enough of a role to be the defining factor.

What I’m worried about is that too many people right now are aiming for him as, say, SP 12-15, when he’s got the floor of an SP30 with the upside of an SP 10. If I’m in the RazzSlam and seeing him as my second SP (because I draft SP late cuz duh), I’ll take that risk.

You don’t win leagues with salad after all! You’ve gotta Burnes that steak.

Nice writeup Blair, yea I am glad to have CBurnes in dynasty. It makes passing on him at this redraft price for 2021 much easier. I would def rather have Lance Lynn in redraft than pay the same type of draft capital for Burnes.

Also, hat tip on the Rudy ranks to subscribers. I didn’t realize that he had that available yet, so I just re-upped now.

Yeah, I’m hyped for early access to the spreadsheets myself. Of course we’re early and there’s a ton of free agents left to land, but it’s so easy to see some early hype players that won’t be sleepers come March drafts. Thanks for checking in!

Yeah, I’m going to pass on Burnes. You convinced me with your No Deal argument. So, no thanks.

Oh, by the way, you said Burnes had a 2.04 WHIP in the fifth paragraph.

Not sure if that’s a typo or what and I’m too lazy to look because I don’t want Burnes on my team. If he did have a 2.04 WHIP. that’s just terrible. If not, might want to fix that!

WHIP and FIP rhyme! Thanks for the catch Harley!