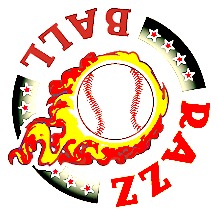 Fantasy Razzball is the game where the goal is to manage the worst fantasy baseball team possible.  You hope to find terrible players who don’t get sent to the minors. As in the RCL, a team’s points are multiplied by the League Competitive Index. The LCI is based on the total points of the top 8 teams per league. The overall standings will be up later in the season. Points are credited as follows:

So far, Aaron Hicks has been the top producer, racking up 96 points on 2-for-43 hitting with 20 strikeouts. Close behind are Brett Wallace (79), Pedro Alvarez (75), and B.J. Upton (70). Giancarlo Stanton (65) and Mike Trout (62) are the top scorers among the first round picks in the regular-scoring RCL.

This is the most competitive league, with even the 10th place team scoring over 200 points! Scrubs and Schlubs has benefited from the talents of both Hicks and Wallace, who they drafted in the 4th and 13th rounds respectively. They also picked up Brandon Mauer in a shrewd move which scored them 22 points for 2/3 of an innings work.

Two teams in this league are falling back with under 150 points. The always competitive ichirosan has JeffLoria’s Fire Sale leading with nearly 600 points. Hicks, Clint Barmes, and Cliff Pennington have paced this team, with Carlos Carrasco adding another 30 points on the pitching side. Barmes and Pennington were drafted, but Hicks and Carrasco were free agent pickups.

The readers of Hire Jim Essian joined in the Fantasy Razzball fun to form this league, and have 9 teams over the 200 mark. The tenth place team, however, has just 20 points. Facepalm United have collected over 50 points from 5 players – Adeiny Hechavarria (63), Jeff Keppinger (52), Rickie Weeks (51), Jonathan Sanchez (51), and Pennington (50).

Three teams here are under 200 points, with the last place team earning just 39. Don Drapper is the only team to eclipse the 600-point mark thus far. This must have been the most well-prepared drafter as his first 4 picks have netted over 200 points by themselves – Dónovan Solano (48), Wallace (75),  Hechavarria (63), and Emilio Bonifacio (53). Vance Worley, a free agent add, has led pitchers with 48 points.

Anthapologists, Dr Easy’s defending overall championship team, sit in fifth place after a slow start, but are working to move up the standings and will probably be battling for the Razz On title at the end. Two teams are under 200 points here. The Scorioles have nothing from their 2nd pick, Jemile Weeks, but numbers 1 and 3 (Drew Stubbs and Justin Smoak) have given them 129 points. 37.5 points from Dan Haren tops the pitching side of the equation.

The lowest-scoring of the six leagues, it also has the tightest battle for first place. The Jr. Spivey Fan Club scored 92 points Saturday to move into the lead, thanks in large part to the pitching of Phil Hughes (33.5) and Edinson Volquez (22.67). The two have now totaled 111 points for the Fan Club. Their hitters have been led by Russell Martin (52) and Dustin Ackley (48).