My 2nd ‘expert’ blogger league draft took place on Monday night – a 12 team 5×5 league run by our friends Jay and Brett at Greener on the Other Side.

It had been about a month since my first blogger draft and I hadn’t made too many adjustments to my rankings (move Pierre down, move Josh Hamilton and Billy Butler up, etc.).

My strategy remained the same – get the most value out of each pick and don’t leave the draft with any glaring weaknesses (harder in a 12 team league to fill holes via free agency – espec. in an advanced league). After running projections for each team, I feel quite strong about my team in all categories except SB and Wins. But with Pierre and Velez, I’ve got hope in SB and I’d prefer to finish middle of the pack in Wins than use crappy starters and damage my ERA/WHIP.

The only other observation I have coming out of this draft is a mild note of surprise at the number of reach picks that were made (vs. Average Draft Position). Examples include Kinsler in the 4th round, Zimmerman in the 5th round, Hamilton and Victorino in the 6th round, Carlos Gomez and Billy Butler in the 13th round, and Andre Ethier in the 14th round. It goes to show that despite all the mock and real drafts done by the members of this league, it’s tough to know exactly when a certain player might come off the board. I prefer to avoid reaching more than a round over ADP for any player but definitely respect a team going after ‘their players’.

See below for my team and the rosters of the other teams. Those in blue are players that I have on my other blogger league team.

If you are so inclined, feel free to comment on my team… 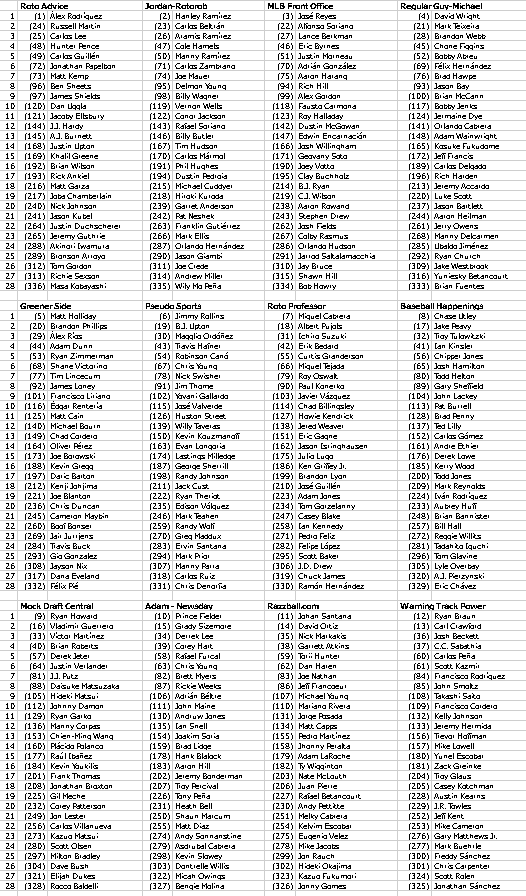