The worlds of baseball and business have many similarities – money, dealing with the press, pleasing customers, etc. – but few jobs translate as well between both as the role of Manager. 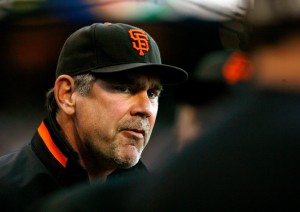 Bruce Bochy, one of the longest tenured baseball managers (entering his 16th year in 2010) and the career leader in home runs by a player born in France, understands these parallels and has partnered with Ray Kroc Jr. to pen the management treatise ‘Bochy Ball:  In The Vicinity’.

Here are some excerpts….

Secret to longevity as a manager in a quick-cycle business:

A manager’s most important job isn’t managing people, a product, or a place.  It’s managing expectations.  You cannot have longitude at a company unless your expectations allow for a certain degree of latitude.  When you first take a job, you need to make sure the expectations are low enough that moderate success is considered palatable and a taste of considerable success lingers on both the organization’s and stakeholders’ tongues……For my first manager job, I inherited a team (the 1994 Padres)  that had come off a .400 season where it’s 2nd best performer was forced into early retirement at 32 (Derek Bell) and their ace pitcher went 6-14 in a strike season.  As long as I didn’t piss off the owner’s pet (Tony Gwynn) and I stayed classy, I just had to finish in first once every couple of years to keep management happy…..When I finished first two years in a row (2005 and 2006), I knew that I’d set expectations too high.  I looked at another company in our space (San Francisco Giants) and saw two straight years of plummeting performance under a respected manager (Felipe Alou) as well as a volatile asset that had seen significant depreciation in recent years (Barry Bonds).  That type of low expectation bar is well worth getting the occassional clam chowder bit stuck in your moustache.

Managing those with more natural talent:

Don’t fall into the trap where you think you have to be better at your employees’ job than they are.  I managed to play 9 seasons in the big leagues and got in about as much ABs as Ichiro manages in one season.  You know how much talent you need to ride the pine while guys like Alan Ashby and Terry Kennedy played in front of me?   Not a lot.  The fact I wasn’t as good at my job gave me the time to prepare to be a manager.  You know how Malcolm Gladwell claims that practicing a task for 10,000 hours makes one a success in their field?  Well, if you figure a game is about 3.5 hours long and that I rode the pine for about 1,000 games in my career, I got 3,500 hours of free practice.  A part of me wishes I could’ve been a bench coach instead for the past 15 years so I could’ve accumulated the 10,000 hours of practice without the distraction of the job getting in the way.

The importance of never settling for 2nd place:

Finishing in first satiates.  Finishing third, fourth, or fifth dulls.  But nothing whets the appetite for success like being in second.  You know what the chances are of a manager not finishing in 2nd for 15 straight years?  2.8%.  That kind of thing doesn’t happen by accident.  Whatever you do, don’t be Avis.  Trying harder is for chumps.  If you can’t be Hertz, be happy being Budget.

Using your head to get ahead:

Many managers quote statistics or wear glasses to appear smart.  I never had to resort to shortcuts.  Employers assume I’m smart because my head is naturally humongous.  No joke.  It’s bigger than Kevin Mench’s.  I went through a whole career with one batting helmet that I’d re-paint each time I got traded.  They used to call it a ’10 gallon helmet’.  On days I’d catch Joe Niekro, he’d scuff up a case of balls and store them in my helmet.  Nolan Ryan would fill my helmet 2/3 full of rice and use it for his hand strengthening exercises.  That son-of-a-gun tried to bulldog me once in a fight and his hand couldn’t even reach my other ear. I wouldn’t be surprised if aspiring managers start taking HGH just to go head-to-head with me.