Sequels are rarely better than the original. Caddyshack II and all the Karate Kids come to mind, but there have been many instances when the new surpassed the old. The Dark Knight, Godfather Part II, Toy Story 2, and X-Men United are but a few. The same dynamic has played out in the baseball world as well. Pudge Rodriguez was a Hall of Fame catcher. His son Dereck? Not so much. C’mon? There’s a reason it’s named the Hall of Fame. Vlad Guerrero and Craig Biggio were both Hall of Famers and have sons in the big leagues now. Cavan and Vlad Jr. have just started their baseball careers, but the probabilites are low that they surpass their father’s exploits. But, but, but….that doesn’t mean it’s impossible, as Ken Griffey Sr. was a three-time All-Star, but Griffey Jr. was elected to the Hall of Fame. So what can we make of Mike Yastrzemski‘s hot start to the Rona-infested season of 2020? Will he be but another run-of-the-mill sequel or are there signs that he’s on his way to eclipsing grandpa Carl’s 3,419 hits, 452 home runs, and Hall of Fame career?

Over his six-year minor league career, Yastrzemski clubbed double-digit home runs just twice. He did have two double-digit stolen base seasons. The walk rate has always been good, surpassing the 10% mark five times. The strikeout rate was in the teens early in his career, but stabilized in the low-to-mid 20% range. The ISO was routinely in .170 range, while the batting average was all over the map. It must be mentioned that he spent most of his career in Baltimore, then was traded to the Giants for a guy named Herb. So disrespectful. Anyways, the Orioles continue to amaze, but at least they freed Yastrzemski.

So, his early season production isn’t unwarranted. Let’s dig into the numbers.

First off, the BABIP is .385, which is fueling the .322 batting average. That should come down .60 to .70 points over the course of a full season, but anything can happen in 40ish games. He could stay hot, but just know that there’s room to the downside in a big way.

Looking at the batted ball data, the numbers that jump out to me are the line drive and ground ball rates. The 14% line drive rate is the lowest number he’s had since Single-A ball back in 2014. The 44.2% ground ball rate is the highest since 2014 as well. Over the past three years, those numbers were in the low-20s and mid-30s respectively.

Why? The pull percentage is the same as last year and he’s barreling the same percentage of pitches. The hard hit and soft contact rates have remained the same. The only thing I can see is that he’s started to get pitched differently as the season has progressed. Early on, 66.85% of pitches were fastballs. On that pitch, he has a wOBA of .481! Against breaking stuff, it’s .289. He also murders offspeed pitches to the tune of a .503 wOBA, but he only sees those around 9% of the time. According to Brooks Baseball, in the month of August, the hard percentage has plummeted to 57.93%, while the breaking pitch percentage has spiked to 32.41%.

The sample sizes are small, so I don’t know how much stock we can put into the numbers. It does make sense that pitchers would start throwing more breaking stuff since he’s killing fastballs. When I look at the plate discipline numbers, I become more bullish on Yastrzemski’s prospects. The chase rate is 21.1%, down from 29.2% last season, the swinging strike rate is down from 11.5% to 8%, and the overall swing rate is down from 47.1% to 35.1%. This tells me that he’s being very patient and waiting for his pitch. The overall contact rate is up 4% to 85.3%, so those breaking pitches he’s been seeing? Yastrzemski spits on them.

I really like what I see with Yastrzemski. The plate discipline is fantastic, which always puts a tent in my pants. Both the ISO and BABIP are going to come down, so there’s going to be regression, but I don’t think it has to be as severe as the projection systems have him down for. Steamer has Yastrzemski projected for a .242/.322/.420 slash with a 9.8% walk rate, 26.1% strikeout rate, and .178 ISO. A .270ish batting average with a .200 ISO is definitely within the realm of possibilities. That’s what he did last year!

Yastrzemski bats leadoff against righties and either second or third against lefties. He good. I’m not sure about Hall of Fame good, but grandpa Carl is definitely proud. 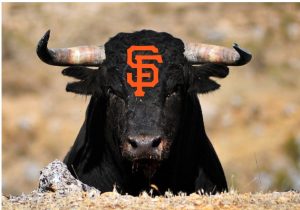 What about E.Andrus? Bull or Bear?
Compare to Solak & Rosario?
(I actually own shares in Andrus)

I think Andrus will be fine. Hard to compare those guys due to them playing different positions. Rosario is the best hitter in the best situation and will provide the home runs. Solak is the best power/speed combo, but playing time could be an issue when Santana returns.