Kevin Bacon was a freaking machine from 1990 to 1994. Flatliners in 1990. JFK in 1991. A Few Good Men in 1992. Earth would not Pass Go until the next Bacon hit was delivered. So, any wonder why 1993 was filled with terror and strife? A devastating tsunami hit Japan, the World Trade got bombed, and we got Beanie Babies! Order was restored in 1994, though, when the Bacon was delivered with one of his finest, The Air Up There. We love you Kevin, but what we most appreciated was the consistency and stability he brought to the world. As fantasy baseballers, we love that. There’s no greater feeling than being able to Sharpie in Mike Trout for .300, 35 home runs, 100 RBI, and 30 stolen bases every season. But there’s only one Mike Trout and a few that could be in that realm of awesomeness. For the others, it’s about streaks and Kevin Kiermaier is on one right now. The funny thing is that I wrote a Bear or Bull on him at this time last season as well. Is this a case of the Christmas Island crabs migrating from the forest to the shore to breed? Or the San Juan Capistrano swallows migrating north?

There’s a chance he ends the season with 10 home runs and 15 stolen bases. The stolen base number may be tougher to achieve, as he hasn’t been running as much lately, but it’s still within the range of outcomes. As I wrote last year, owning Kiermaier is like Chinese water torture. You’ll get the stats eventually but it’s a slow, painful process. Currently, Kiermaier is at 7 home runs and 9 stolen bases. There are 19 players in all of baseball that have hit at least 10 home runs with 15 stolen bases, so there’s value here as he is more than likely on the waiver wire.

Kiermaier is far from sexy like his movie star counterpart, but he can provide power and speed for cheap. With Mallex Smith batting leadoff for the Rays, he has been fifth of sixth in the lineup, which could give him more RBI opportunites. If you need a fourth or fifth outfielder, Kiermaier could be a viable option. 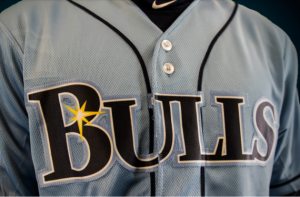