John Grisham is a veteran in the book game, as he’s written 43 of them. The Pelican Brief and The Firm were the two that elevated him to superstar status, but it was A Time to Kill that put him on the map. My money is on people thinking it was To Kill a Mockingbird, but whatever. By any means necessary, right? Anyways, A Time to Kill was about some southern drama, in which a ten-year-old girl was killed by two men. Girl was black. Men were white. The girl’s father takes justice into his own hands, clutched around an assault rifle. White community becomes enraged. The rest is lawyer blah blah blah. As the father to a four-year-old girl, there is no better time to kill. Man, this post has gotten a lot edgier than I anticipated. Let me quickly hop onto my segue and roll back onto the fantasy streets. We have one more week left in the fantasy season. It’s a……time to kill (Yes, this website is still free) and Trent Grisham of the Milwaukee Brewers, no relation to John as far as I know, could assist in ascertaining fantasy glory.

Throughout his minor league career, he always exhibited a high walk rate, as it never dipped below 14%. The strikeout rate has fluctuated, from a high of 26% to a low of 13.9%, which he displayed this year in Triple-A. The power has…..well, I want to say developed but I think it’s clear at this point that it’s all about the juiced balls. He was a low-.100 ISO hitter, but then this season? .250 ISO is Double-A and .396 ISO in Triple-A. The batting average history shows that he’s probably a .240-ish hitter. He does have some wheels, as he stole 37 bases in 2017.

Since getting the call up on August 1st, Grisham has hit 5 home runs, scored 17 runs, and driven in 15. The batting average is .240, BABIP is .305, and ISO is .176. The strikeout rate is 28.7%, while the walk rate is 8.4%. The batting average and ISO seem to be in the expected outcome range. The walk rate is low, though, but the elevated strikeout rate isn’t a surprise, as this is his first look in the bigs.

Looking at the batted ball data, most of the numbers look consistent with his minor league history. The GB/FB is 0.77, line drive rate is 20.7%, and fly ball rate is 44.8%. The pop up rate is significantly lower, though (7.7% versus 15+% rates in the minors). He is also utilizing more of the field in the bigs, as the pull rate is 36.8% compared to the mid-40% range he was posting in the minors.

The plate discipline numbers are encouraging. The swinging strike rate is only 8.7%, while the chase rate is a paltry 23.3%. The contact rate in the strike zone is 85.9% and the overall contact rate is 78.1%.

As for splits, the numbers are similar, with a slight lean towards better success against lefties. The strikeout rate is 6% higher against them, though. With that said, he has hit four of his five homers against right-handed pitching. As for home/away, Grisham has been much more successful on the road. The strikeout rate is lower, batting average is higher, as are the power numbers.

Time to hop onto that segue again, as the schedule lines up well the final week of the season. The Brewers play three games in Cincinnati, then three games in Colorado. Woo hoo! In addition, it looks like all six games will be against right-handed pitching, so the playing time should be secure. Finally, he’s been batting lead off for the majority of the games, and since Christian Yelich went down, Grisham has been slotted at the top of the order in every game he’s started. 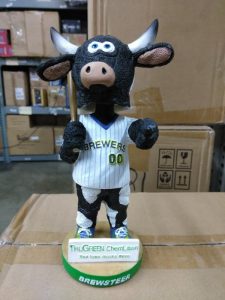