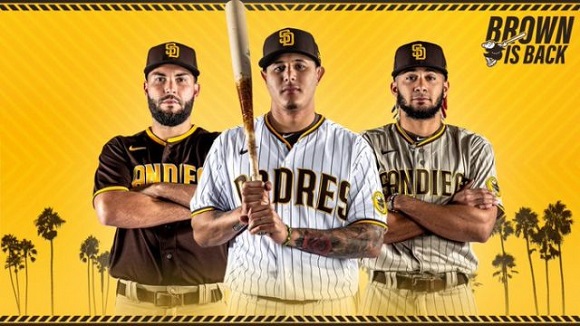 Welcome to the 2020 Razzball Team Previews! (Our “2020” comes with more Jay and less Barbara Walters!) (That joke is probably older than you!) Sorry for all the parentheses and exclamation points, I just get so excited when I think about Barbara Walters, and don’t even get me started on Hugh Downs… Regardless, here, you’ll find everything you need to know about each team to get yourself ready for the upcoming fantasy baseball season, Razz-style. So while you’re stretching your lats and relearning calculus to get that upper hand on your fantasy peers, why not also check out what the Padres have in store for you and your fantasy team? (I’m sure it’s postpartum depression, but hey! “Life isn’t as sweet without the sour.” I’m pretty sure that’s what Wil Myer’s spirit animal told him.) 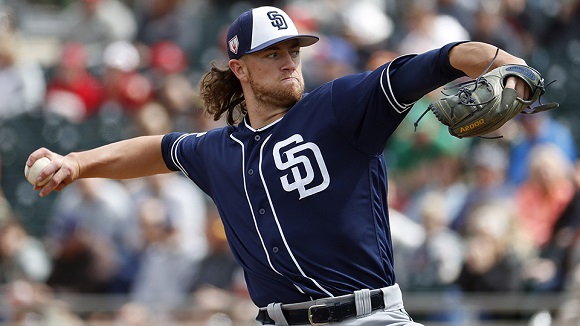 Chris Paddack, staring like how I stare at canned asparagus.

Strengths – Going into the 2019 Season, it was probably a bit easier to pinpoint where the team’s strengths lay, and it certainly wasn’t with their starting rotation. An obvious area of need, both A.J. Preller and I seemed to have come to the same conclusion this past offseason. (It’s a fan-fic in-progress, both of us collaborating on the Padres front office strategy. The working title so far is: PTSD.) While still lacking a natural ace like other teams in the NL West, it wasn’t a lack for trying these last several months as Padres were in discussions with other teams and several marquee free agent pitchers, including San Diego native Stephen Strasburg. However, as it stands now, Chris Paddack looks to take his art of control to the Rothschild school of Pitching, which has been long-standing and pretty respected throughout the league, as he’s often quoted as having a high-quality “hands on” instructional approach. I’m actually not sure how you instruct with hands off, but there’s probably a lot less restraining orders involved. But you know, this concept can be true of the entire rotation as well… The staff is fairly young, and all stand to have at least the opportunity to improve with a better custodian in charge. Joey Lucchesi, Garrett Richards, Cal Quantrill, Dinelson Lamet, and Zach Davies (to a lesser extent) all have a shot to be above average both for the Padres and your fantasy team, and while the easy answer is to say that Padres biggest strength is their bullpen (who hasn’t said this the last decade?), each and every pitcher on this roster has qualities that can provide value to your 12-team format (and larger) at some point this year. 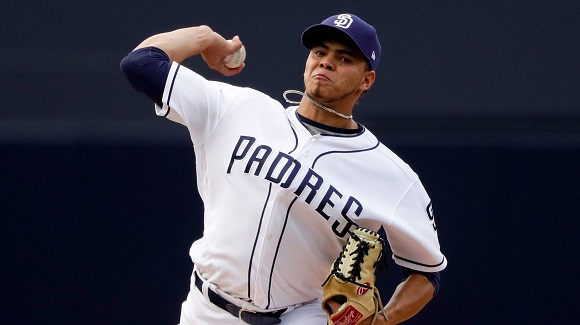 Lamet isn’t actually trying to throw the ball, he’s only flexing his right arm to show us all how “Padres” would look if it was spelled with two “D’s”. My parents almost named me Sherlock, true story.

Weaknesses – How much time do we have, because I could go for years, years I say! Despite my glowing praise of the Padres starting rotation, one of the potential weaknesses could actually end up being the health of that rotation. While this could be true for any team, I’d say the DL Friends & Family discount card holders Garrett Richards and Dinelson Lamet could leave a gaping hole in the rotation without much notice. That doesn’t even include the eventual displacement of Zach Davies, who really isn’t that efficient to begin with (and no longer has a snazzy Brewers defense behind him). While it’d be easy to point straight at the pair of 200-million dollar paperweights, also known as Eric Hosmer and Wil Myers respectfully (or in this case, disrespectfully), as a main weakness, I’m just going to go ahead and admit that my greatest strengths for this team also ended up its greatest weakness. WhAt A tWiSt! 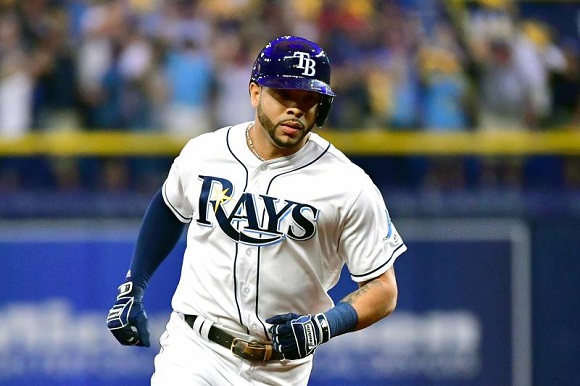 Is it just me or is this one-sleeve thing dumb. I’ve never been like, jeez, my left arm is freezing, but my right arm, damn dude, it’s on fire! Wooo, who got the scissors so I can go Che on this sweater? Ef the AC, we going one sleave WOOO!

The Pick – The easy answer would be a coin that has Fernando Tatis Jr. on one side and Manny Machado on the other. This metaphor only exists so I can hedge, but I kinda want to say the actual pick is… Tommy Pham. Don’t get me wrong, you obviously draft Tatis and Machado, but if you’re asking me who “The Pick” is here, a return of value based on draft position and expected output, I think a guy whose baseball card reads like a Billy Beane wet dream can find a lot more success just from the mere fact that this team literally does not have another outfielder you’d want to see starting everyday unless you want an ulcer. Watching another Myers centerfield experiment develop might even cause self-seppuku, so I’m just saying, you can go ahead and pay full price for the two stars (well, one potential star, one current star) mentioned above, they will be strong investments, but there’s much to be said about an above average guy that helps you everywhere and hurts you nowhere, and that has zero threats to his playing time. 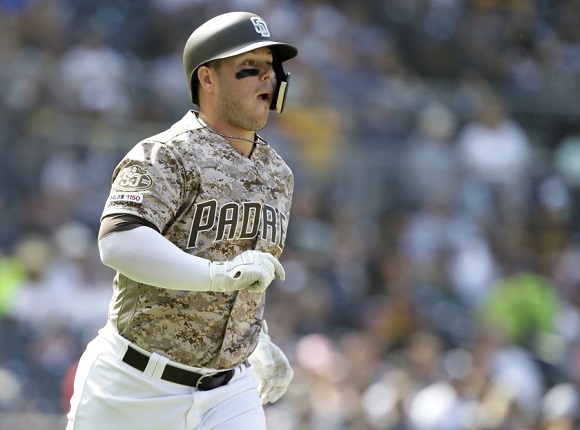 You think his parents named him what he’s the opposite of for some giggles? I mean, think about it, the dude doesn’t look Thai at all, and no way he’s from France. CHECKMATE ATHIESTS.

The Sleeper – I’ve always had a thing for multi-positional players, even in fantasy baseball. Is it from a lack of any physical flexibility? Maybe. (Example: Me dancing is 90% effort and 10% style.) But an even better reason is having a guy you can fit anywhere, any time, any place. Generally how your mother feels about me. A guy like Ty France is a dream come true in this scenario. First, he’s young with a pretty steady minor league pedigree. Second, the Padres offense sucks in the outfield, the right side of the infield, and on the bench (mostly when that right side of the infield is sitting there). Because of that, even with the addition of Jurickson Profar, I’m a huge believer that France will cobble enough at-bats (500+) to be fantasy relevant in larger leagues at worse, and could even make enough noise to win a starting job at whatever position offensively defenestrates first. The 24.4 strikeout per plate appearance does worry me a bit, but his minor league trends may still shine through, and his 41.9 percent hard-hit rate (MLB AVG: 34.5%) gives me confidence that his minor league power numbers can translate (even with the PCL adjustments). Interestingly enough, I think Ty France has a chance to be what Jedd Gyorko was supposed to be.

The Prospect – There are plenty of names that I can list here, but I believe Taylor Trammell has the inside track to bring the most to your team. Granted, MacKenzie Gore, Luis Patiño and C.J. Abrams should be at the top of everyone’s list (including ours!), but in terms of prognostication, I can completely fathom a Padres team that looks at Trammell’s ability to actually play defense in the outfield (and play it very well), and that also brings something that other Padres hitters might lack, and that’s recognition of what a strike zone is and what it does. With speed and power as part of his overall skillset, out of this very robust system I think he can offer the most by the end of the year.

Outlook – So I mean, yeah, the Padres could be really good. I understand that the whole “tangible improvement” fad was supposed to happen last year, and the year before that, etc., but there are enough elements here to think this is the year they could land in the 80-90 win range. I’m not going to expect that, but beyond trying to break into the playoffs more than twice per century, there are a lot of interesting components that could complement your fantasy team, and as someone who is a Padres fanatic (masochist?), just the mere thought that this might be the first season in a long time I might be able to finally live my dream has me smiling: And that’s easily finding Wil Myers and Eric Hosmer on the free agent wire, signing them, and then releasing them, and then doing that 365 more times.

Jay is a longtime Razzball everything who consumes an egregious amount of Makers Mark as a vehicle to gain wisdom and augment his natural glow. Living in the D.C. area, he also likes spending time visiting the local parks and feeding lettuce to any turtles he encounters, including Mitch McConnell. You can follow him @jaywrong, or read his rarely (like never) updated blog Desultory Thoughts of a Longfellow.