Greetings, RCLers! Razzball has decided to move the Razzball Commenter Leagues from ESPN to Fantrax this season, and I’m here to show you around the place. I’m Nathan Dokken and I not only write for Fantrax, I have been playing on Fantrax for many years.  It’s definitely a little different than ESPN, but once you know your way around I think you’ll find it to be a great platform for fantasy. So come on in, take off your shoes (and those JNCO jeans…you’re embarrassing yourself), put on your adventure cap, and let’s take the tour!

Perhaps the most unique part about Fantrax is that they don’t really have an app. Settle down, millennials! It’ll be okay! Fantrax has set up the web experience to essentially function like an app if you’re using mobile. But first, if you’re on an actual computer, this is what you’ll get.

If you’re on mobile you’ll get a bit of a different look. The menu for everything is on the side rather than the top. 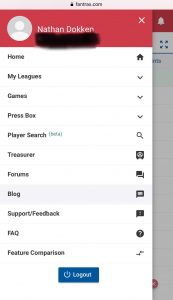 I blurred my email so none of you sign me up for that damn Razzball newsletter!

The first thing you’ll want to do when you get into your league is set up your team name (your team name is really the most important part of fantasy) and notification preferences. To do that, go to Team > My Alerts & Preferences. You can set up your team name, logo, and all your layout and notification preferences. As far as layout goes under General Preferences, you will really just have to fiddle with it yourself to find which you prefer the best. Personally I leave it the way it’s automatically set up, but there’s plenty of customization to be had here. It’s also very important to check all the necessary boxes under Email Preferences so you can be properly notified of goings on in your league. I check nearly all the boxes so that I’m always aware which players are being added/dropped, whenever someone proposes a trade to me, whenever someone updates their trade block, etc. A lot of the time the first person to make an offer to a team that has just updated their block is the one who walks away with the guy they want. Don’t leave yourself in the dark! Check the boxes!

As long as we’re talking trades, let’s head to the Transactions tab. If you know a player in particular you want to add, the Express Claim/Drop is the transaction equivalent of what Ferris Bueller did at the end of his day off to beat his family home. You can just type in the name of the player you want and add him right away without going to the Players tab and searching that way. Very handy for those first-come-first-serve leagues that don’t use waivers. You can also make your Trades and check out everyone’s Trade Block under the Transactions tab. One really cool thing about trading on Fantrax is that you can do 3+ team trades. I’ve always wanted to do a three-way, but as hard as I’ve tried I’ve never been able to accomplish it…

If you want to get a hold of another league member, head to the Team tab. If you want to send an email to someone else in your league, go to Team > Owner List/Send Emails. You can check the box of the owner you want to contact (or check all to notify the entire league) and write your email right on that page. There is also the Message Board, of course, and the Chat, both of which are on the league’s Home Page. A Chat can be sent privately as well; just click on the little face icon in the top right corner of the Chat window and select the team that you want to talk privately to. It lets you know you’re talking privately when the text shows up red. If it’s black, it’s there for everyone to see. Many embarrassing comments that were meant to be private have shown up to all in my leagues. You don’t want to be talking to Jack about how hot Larry’s wife is thinking it’s a DM but it’s showing up to everyone. Or, you know, private trade talks. People do that too. If it’s a DM, make sure that text is red.

Another absolute MUST is to go to Other > League Rules Summary. If it wasn’t obvious, this is where you check out every setting of your league. It’s one thing if you’ve been in the same dynasty league for a while and nothing will change, but if you’re in a new league you really need to dig around in here and make sure you know your league rules. Check the scoring settings, transaction settings, make sure the rosters are set up properly, etc. One thing to check for sure is the number of DL slots. Things changed a lot in 2017 with the 10-Day DL, and your league should have plenty of DL slots to make up for that. Bonus tip: if you want to have a lot of DL slots but want to avoid owners abusing it by stashing injured players, you can have your commissioner check the “Prevent Claims for Injured Players” box under Commissioner > League Setup > Transactions & Periods > Claims/Drops.

Another option worthy of checking out under the Other tab is League Polls. Any active poll will show up on the League Home page, but if you want to start your own new poll, this is where you’ll do it. Who’s hotter, Jack’s wife or Larry’s? Let the league decide with a poll!

Unless you’re in a Draft & Hold format, you’ll be venturing into the player pool quite a bit over the season. Heading to the Players tab gets you there, and you can sort the pool  many ways once you’re there. You can play around with the options to your liking. One cool option for those who play in keeper/dynasty leagues with farm systems is the ability to sort by Rookie. This brings up only the pool of rookies/prospects, and from there you can sort by stats, ownership, percentage of leagues they were drafted in, and more. It’s a great way to find players that should be owned but have slipped through the cracks.

One final tip I’ll lend you is when you’re drafting, make sure you’re sorting the player pool properly. The default setting sorts by Score, which weighs pitching heavily. Make sure you sort by ADP to begin with, or break things down into Hitter or Pitcher and sort by your desired statistic there.

The rest is pretty self-explanatory, so I’ll leave it up to you to explanatory it to yourself. Fantrax really is a great platform, and I think you’ll enjoy it. If you get a wild hair and want to start a new league, the features you can choose from are pretty insane. Have you always wanted to score Putouts by Outfielders? Then select POOF! Do you want to score Pitches Faced? Select PIT! Do you fear the IRS? Then you better not choose to score Inherited Runners Stranded! There is every scoring option you have ever thought of and more. Word on the street is they’re even trying to reward teams somehow for their SAGNOF%. Elon Musk is hard at work on the calculus on that one.

Let me know in the comments if I missed something and I’ll be happy to help, and you can always reach out to me on Twitter @NathanDokken as well.