Hype gets a bad rap or, to put it into a confusing pun, hype is hype-less even for the hyper. That’s not to say hype isn’t understood to a degree. Most notably, Gartner, a technology research company out of Stamford, Conn., figured out what all the hype was about, coining the term “hype cycle.” The “Hype Cycle” explains the over-enthusiasm or “hype” and subsequent disappointment that typically happens with the introduction of new technologies. It’s not too far out on a limb to say, new technologies aren’t the only things hyped. Right now, Ryan Braun is more hyped than any other player going into 2008 drafts. There are 5 steps to the Gartner hype cycle. Let’s crib it and put it towards Ryan Braun, shall we?

1. “Technology Trigger” — Or in this case, Ryan Braun’s emergence as a fantasy stud last year.

2. “Peak of Inflated Expectations” — In the next phase, a frenzy of publicity generates over-enthusiasm and unrealistic expectations. Or in this case, “Ryan Braun is going 50/50 in 2008 and will begin dating Gisele Bundchen by the All-Star break.” This is the cycle phase we’re currently in.

3. “Trough of Disillusionment” — Ryan Braun will enter the “trough of disillusionment” because he will fail to meet expectations and quickly become unfashionable. Consequently, fantasy baseball players will trade him for Lyle Overbay and a bag of shelled pecans.

4. “Slope of Enlightenment” — Although fantasy baseball players may write off Ryan Braun, some players continue through the “slope of enlightenment” and understand the benefits and practical application of Ryan Braun. Or in this case, stick Braun at the corner infield spot and sit him against tough righties.

5. “Plateau of Productivity” — Ryan Braun reaches the “plateau of productivity” as his benefits become widely demonstrated and accepted. He learns to take a walk in the second half of ’08 and he’s drafted on average in the fourth round in ’09. He becomes increasingly stable and evolves in his third and fourth years. The final height of the plateau varies according to whether Ryan Braun is broadly applicable or benefits only a niche market.

All of this is broken down in this lovely chart. (Since I’m sans photoshop and wouldn’t know how to use it even if I had it, Ryan Braun’s arrow was added by a friend of the site, www.saphrym.com.) 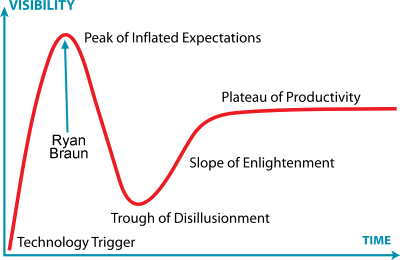 So you see, Ryan Braun will be broadly applicable one day, but that day is not now. Don’t get caught up in the hype cycle. You’re welcome.