After a one-week hiatus due to a very welcomed (and very needed) vacation, welcome back to another edition of Top Fantasy Keepers.

Despite taking a break myself, Major League Baseball decided to keep playing baseball. During that time, one player who has rocketed through the minors was recalled to the majors while another player who is now in his second season continued to hit home runs.

Earning his promotion to the majors was Vinnie Pasquantino of the Kansas City Royals. The powerful Pasquantino first tasted the minors in 2019 after an outstanding college career at Old Dominion, making him the second-greatest baseball player at the school behind Justin Verlander.

Despite smashing the ball out of minor league ballparks across America since 2019, Pasquantino is currently rostered in 33 percent of Yahoo leagues and 10.2 percent of ESPN leagues.

Like Pasquantino, Cal Raleigh of the Seattle Mariners had an outstanding college career, spending three years at Florida State. And like Pasquantino, Raleigh move pretty quickly through the Mariners system after being drafted in 2018.

Let’s take a look at these two players and see if they should be on your roster or not.

Despite a solid career at Old Dominion, Pasquantino was not a coveted prospect entering the 2019 draft. The Royals nabbed him in the 11th round after the left-hand hitting first baseman hit 16 homers and slugged .573 in 56 games with the Monarchs. But Pasquantino has made Kansas City look very smart since that draft day selection.

Pasquantino continued to put up great numbers at Triple-A this season, hitting 18 homers and driving in 67 in 69 games before being recalled by the Royals. He also had 37 walks while whiffing only 36 times.

His amazing strike zone recognition is not new. In college, he had a career walk rate of 10.2% and a strikeout rate of only 12.4%. In his minor league career those rates were 12.1% and 13.2%. And through Friday, in his first 11 plate appearances, Pasquantino has zero strikeouts while walking twice.

Zooming to the Front

As a Royals prospect, Pasquantino has been in the shadow of fellow first baseman Nick Pratto, who was selected with the 14th overall pick in the 2017 draft. Pratto has had his moments in the minors, but he has been nowhere near as consistent as Pasquantino.

He uses his lower half to hit the ball hard and with power. While it is a very small sample size, his average EV is 96.5 mph, well above the MLB average of 88.3. If there is one drawback with Pasquantino so far is that of his 24 homers last season, only three came against left-handed pitchers.

I usually focus on rookies when discussing the top fantasy keepers. Raleigh is not a rookie, but he plays a position that always has fantasy owners scrambling to find production and Raleigh does do one thing really well – hit the ball hard.

In his career at Florida State, he average one homer every 22.6 at-bats and then lowered that rate to 17.1 bombs per at-bat during his minor league career. With the Mariners the past two years, he is averaging a homer every 23.8 at-bats but that rate is at one homer per 14.8 at-bats this season.

Look at the Numbers 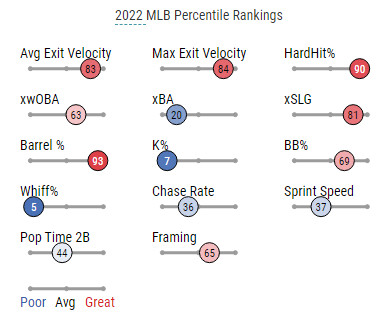 As you can see from the graph above, Raleigh is way above average in average exit velocity, max exit velocity, hard hit percentage, barrel percentage, and xSLG. It is this power that led the Mariners to select Raleigh in the third round of the 2018 draft.

The catcher moved quickly through the Seattle system, reaching Double-A in his first full season of pro ball and hitting 29 homers that year – the most of any catcher in the minors.

The Power is Great, but…

While Raleigh packs a powerful swing, as you can see here and here, that is about all he has done well at the plate.

In 148 plate appearances last season with Seattle, Raleigh had a 35.1% strikeout rate and only a 4.7% walk rate. This season those numbers are better as his strikeout percentage is currently at 30.4% with a much-improved walk rate of 10.1%. His inability to make consistent contact has led to a career batting average of .190 with the Mariners. The power is great, but a career slash line of .190/.255/.393 is tough to swallow.

As mentioned earlier, Pasquantino has been in the prospect shadow of Pratto, and that likely won’t stop just because he is now in the majors and Pratto is not. Teams do not give up on first-round selections until they have to. But even if Pratto finds his way to the Royals, Pasquantino can slide over to DH if not hold down the first base job himself.

He has a great eye at the plate which should produce a high batting average and on-base percentage. And of course, he has great power. While not a top 100 prospect entering the season, Pasquantino is certainly worth adding for the rest of the season and beyond, especially if you are in a rebuilding mode. In the two auction leagues I run, multiple teams made bids on him to create two fierce auctions.

As for Raleigh, he is a good player to add this year if you need help with power, but I would not classify him as a must-keep player. Right now he has one quality – hitting for power. Otherwise, he will hurt you in most offensive categories.

The Mariners also have Harry Ford sitting in the minors. Seattle selected Ford with the 12th overall pick last summer and have every intention of making him their No. 1 catcher. That means Raleigh will likely slot into a backup role in two years and thus get fewer at-bats to take advantage of his power.