Hello once again. Glad you are back for another round of discussion about Top Dynasty Keepers.

With starters taking the mound only twice a week, max, and relievers able to blow up your ERA and WHIP in a heartbeat, finding solid starting pitchers is always a chore. Finding young starters this late in the season who may also be good to great keepers is nearly impossible, but not completely.

Because the search for good starting pitching is a little harder, I also expand the age of the players I am willing to look at when considering them as good keepers or not. So this week let’s examine two 28-year-old starters who pitch on two lousy teams.

The first is left-hander Cole Irvin of the Oakland Athletics. Irvin has the distinction of being drafted three times in his career – once out of high school in the 29th round of the 2012 draft then twice in college after his 2015 season (32nd round) and 2016 seasons (5th round) at Oregon. Cole is widely available in Yahoo and ESPN leagues, rostered at 39% and 30.2% respectively.

The second pitcher is right-hander JT Brubaker of the Pittsburgh Pirates. Drafted in the 6th round of the 2015 draft, Brubaker is rostered in only 13% of Yahoo leagues and 8.2% of ESPN leagues.

Both of these pitchers are having career years, which is why we are taking a look at them. At this stage of the season, if you are looking at them they are probably worthy of adding to your staff for a spot start or two. But are they worthy of being a keeper?

Despite being drafted out of high school, Irvin decided to attend Oregon. Unfortunately, he had to undergo Tommy John surgery in 2014 but ultimately worked his way back to be drafted in the fifth round by the Phillies in 2016. He quickly proved himself as he led the International League (Triple-A) with a 2.57 ERA in 2018 while going 14-4.

Keeping Irvin from ever being a top prospect was the fact that he does not feature blow-away pitches. His four-seam fastball and sinker sit at 90-91 mph while throwing a slider at 87 mph, a change at 83 mph, and a curve at 77 mph. Irvin, however, mixes all of those pitches well and made his debut with the Phillies in 2019, appearing in 16 games, while making three starts. Ahead of the 2021 season, the A’s purchased Irvin and have had him slotted in the rotation since.

So, why the vast improvement?

Since his major league debut, Irvin is now relying less and less on his average fastball and is now throwing his sinker and curveball more while basically ditching his slider. His fastball usage has dropped from 40.5% last season to 34.6% this year. His slider, which he featured 14.9% of the time last season, is now thrown only 3.5% of the time. Conversely, his sinker usage has gone from 19.2% to 23.1% and his curveball has gone from a usage rate of 3.3% to 18.1%.

And as you can see from the chart above, Irvin does a good job of staying away from the heart of the zone. He throws his fastball up while his sinker and changeup tend to hit the outside edge to right-handed hitters while he busts his curveball in under their hands.

Brubaker is one of two former University of Akron pitchers in the majors right now, joining Chris Bassitt of the Mets. Drafted in the sixth round by the Pirates in 2015, Brubaker caught the attention of Pirates scouts not because of his success in college, but because of his raw stuff. During his career at Akron, Brubaker was 8-16 with a 4.81 ERA and 1.516 WHIP, allowing 10 H/9IP and 3.6 BB/9IP.

However, the Pirates saw a pitcher who throws a sinker that averages 93.3 mph, a four-seam fastball that averages 92.8 mph, and a slider that comes in at 87 mph.

Brubaker has above-average horizontal movement on his sinker and four-seamer as well as his changeup. The sinker is the pitch Brubaker relies on, throwing it 40% of the time, followed by his slider at 32.8% and curveball at 14.6%. He then mixes in his 4-seamer (7.3%) and changeup (5.2%).

Despite the lack of great horizontal movement on his slider, Brubaker continues to throw it so much because opposing hitters have a tough time with that pitch with a Whiff% of 40.1% and a batting average of .235. However, despite the above-average horizontal movement of his sinker and four-seamer, opposing batters have a Whiff% of 16.1% and 15.9% while hitting .271 off the sinker and .381 against the four-seamer.

For some reason, Brubaker doesn’t throw his curveball more often. Like his slider, it is actually below average in horizontal and vertical movement as it is more of a late-breaking pitch. That late break is leaving batters struggling to hit it, recording only a .200 batting average against the curve with a Whiff% of 33.6%. 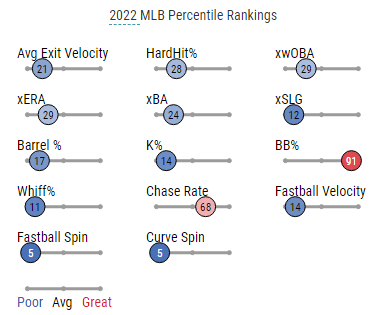 When it comes to Irvin, he is an example of the results not always matching what you see. As you can see above, Irvin does one thing really well (not walk hitters) while everything else is pretty much below average compared to the rest of the starters in MLB.

If you are expecting Irvin to anchor your pitching staff, then he is NOT a top dynasty keeper. I argue, however, that Irvin is a keeper. He is valuable when it comes to two statistical categories – ERA and WHIP.

He is not going to hurt you there at all. While his ERA may increase a bit next year, I expect it to stay below league average while his WHIP will continue to be good. If your league uses K/9, then Irvin is not going to help you. But if you use just strikeouts, then it is a counting stat that he will add six or seven strikeouts per game.

In a keeper league, the top pitchers are not going to be available unless you’re in a contract league and they are too expensive to keep. But that means you will have to battle the rest of the league and pay a lot of money, to add them. Meanwhile, Irvin is a free agent right now who can be added and provide solid numbers this season and in future seasons. 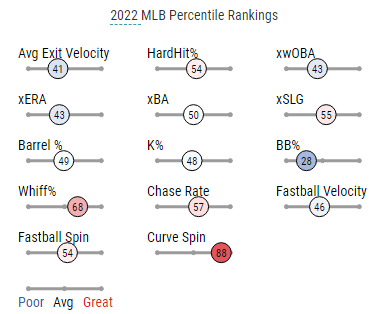 Like Irvin, Brubaker doesn’t have a lot of red on the chart above when compared to the rest of major league pitchers. He has a great spin rate on his curve, a good Whiff%, and a decent chase rate.

Right now, Brubaker is the opposite of Irvin when it comes to fantasy stats. His ERA is at a career-best 3.96, but his WHIP is horrendous at a career-worst 1.430. Walks have always been an issue for Brubaker as his career BB/9IP is 3.2 and this year it is sitting at 3.8. He is also allowing a hit per inning, and with his high walk rate, that leads to that horrible WHIP.

The good news when it comes to Brubaker is the fact he strikes hitters out. He is average 9.1 K/9IP this year and his career rate is 9.0.

So, would I keep Brubaker beyond this season? No, I wouldn’t. Despite the fact he has better “stuff” than Irvin, he is not the pitcher Irvin is. I’m not convinced that the improvement Brubaker has shown on the mound as far as ERA is a real indication of him being a better pitcher than he was his first two years with the Pirates. The WHIP is up and he isn’t suddenly striking out more hitters than he has in the past.

So for me, Brubaker may be a need this season, but he is not a pitcher I would keep beyond 2022.

Just wanted to throw this out there and see what you thought.

When we first started a dynasty league I am in, teams would stream pitchers by the max amount of pickups allowed each week as they attempted to get as many strikeouts and as many wins as possible. They knew if they won those two categories, that was enough whether they won ERA and or WHIP, and if they won either or both ERA and WHIP, then it was just gravy.

To stop this obvious flaw in the strategy of the game, we added walks and holds as categories. Suddenly, if you were grabbing any SP off the waiver wire just to get Ks and Wins, he better have good control or he was going to cost you in the walks category. The holds also helped balance out people who were run amuck with SPs. Now teams could get RPs and concentrate on Holds to combat teams loaded up with SPs or closers.

I think these two changes helped balance our league a lot. It worked out so well, that I’ve added them in other leagues I play in. They seem to make a whole lot of sense in terms of balancing strategy of play and they also make it more challenging because you have to know bullpens much better.

Based on our settings, Brubaker isn’t worth rostering at all but Irvin actually is despite his inability to consistently get strikeouts. He’s great for ratios and wouldn’t hurt you in walks. Unfortunately, since they both play for dogs, neither helps much in the “win” category.

That was some pretty good thinking. I like such an easy solution.

In a league I run, we changed strikeouts to K/9. We already used wins, QS to help starters and had Holds and Saves to allow teams to build around closers or setup men.

But teams would still load up on starters to rack up the wins, quality starts and strike outs. Going to K/9 had now given owners a chance to build strong bullpens, which is more how today’s staffs are built.