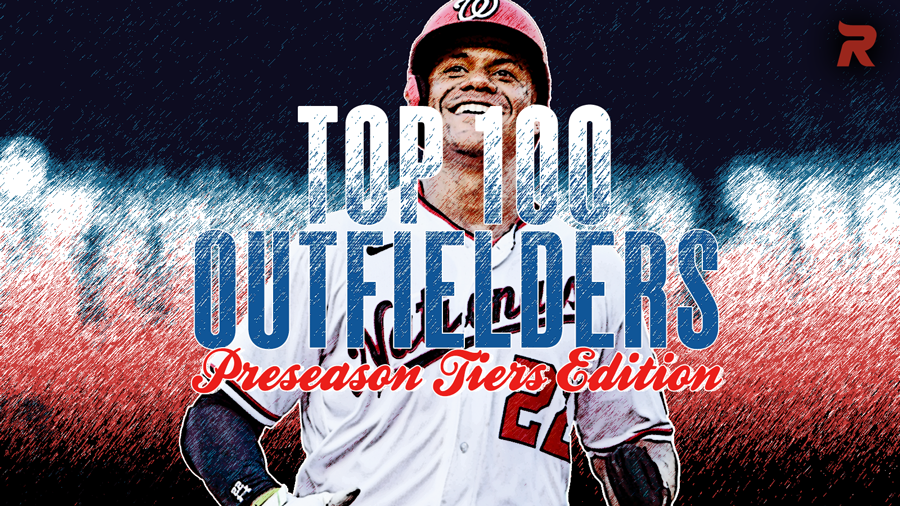 Greetings Razzers, it’s another hot season here at Razzball, and have I got a treat for you. This year’s preseason edition of outfield rankings done by yours truly will now feature outfield TIERS. Everybody loves tiers. However, these aren’t just your everyday run-of-the-mill tiers, No sir (/ma’am). These are Coolwhip’s latest labor of love and lament to navigate the wild field of outfielders. My mission, to help you sort through the mess and guide your ship to port. Outfielders are the most prominent position on the offensive side of the ball and I thought I would take a stab at putting together a pairings tool built into the rankings board similar to what Grey has with the starting pitchers (sorta). During the season I’ll be updating a ROS board based on production and my tea leaves but for today, a bit of a draft guide. Let’s talk about it.

CWT – What the hell is that?

These are patent-pending Coolwhip Tiers (CWT). And what CWT does for you is it allows you see where I have the wide breadth of the outfield landscape valued among their peers. These tell you whether I view said outfielder as an OF1 to OF5. And each tier corresponds to a particular Coolwhip $ value. The tiers though are important for guiding you on when you should look at taking an OF for each slot. Most standard leagues these days have 5 OF slots and it’s important to fill those spots in an intentional manner while you juggle the rest of the roster. If you overcommit it can lead you to be thin in other areas that are harder to replace in the season. Since every MLB team has 3 starting outfielders there are more players for those spots (duh) and thus they are easier to replace. You can then make sure to leave a spot or 2 clear for weaker/riskier players that can be cycled. Utilize at least 1-2 players from tiers 4 and 5. could be two 4s, two 5s, whichever.

That’s Coolwhip Dollars, my dude! Does it mean you can buy something? Not really. The “$” is really a stand-in for value. The CW$ is me assigning a single simplified numerical value to the contribution of the player, paired with risk, injury, etc. And the idea behind these values is that your goal (minimum) should be to collect a 5-person outfield around the $15 total. If you can get close to that, fine. This obviously doesn’t take into account the rest of your roster (that’s what Rudy’s War Room is for). The dollars though aren’t the main focus, it’s more a tool to help you with spreading resources through the tiers. So think more 15 points on the tiers (CWT) vs the dollar amounts. You could follow the traditional route and take one from each tier and that will get you to 15 (OF1, OF2, OF3, OF4, OF5) or shake it up.

My goal for this is to provide you with a roadmap for building out your outfield during the draft without overinvesting in roster positions in FAAB/waiver leagues that are usually ideal for churning out weak links for hot bats and breakouts (MI/CI/UT, OF4, OF5). I’ve talked about this some before, but let’s revisit it now. You usually want 2-3 of these spots to remain flexible and not grow too attached to them so that you can adapt to variance and the hot/cold of less valuable players. Without this adaptability, you are handicapping your potential to remain competitive. So the idea is don’t invest too heavily in OF in the CWT 1-3 range and take some risks with some 4s and 5s so it is easier to let them go should they fail. Be like water, my friend. Without further ado the list…

Once again, the individual ranks (and to a degree the dollars) don’t really matter, what’s important are the tiers :) Any outfielder not listed, consider them tier 5.

The main thing is room for growth

I don’t think that would make him #11 purely based on average, he’s an elite prospect going into his “2nd” real season, usually when breakouts happen. Through 124 games we can say he’s basically a ~30/20 .280+ hitter right now, without any growth. If he takes any step forward that’s easily first-round value which makes him a top 5 OF, and since I’m a believer I have him at 3 because I think he’ll hit 1st or 2nd in the lineup most of the time.

Looking at CW$ I have him as basically the same value as Tucker/Harper since they profile very close together… tucker had his breakout and he’s basically a 35/15/.290… Harper is about the same with a little AVG regression but more OBP & counting stats. Mullins is lower cus i don’t fully buy into last year plus his home park change, and O’Neill is lower because his profile suggests the AVG comes down with his high K-rate. All that to say, Robert has a bit more risk but also the most room to improve.

don’t panic! These are by NFBC positions, I’ll update the next one to include guys like Franmil. He’s an OF2

You know, in 7-8+ years I don’t think I’ve asked you many questions and I’d like to apologize for that.

I have won the league 2 or 3 times, made the Playoffs all but 1 year and took 2nd once. I finished in 5th last year so I’ll be drafting 7th which I like unless I win the league if that makes sense, lol.

My keepers are: (look at that OF BTW)
OF – Juan Soto
OF – Bryce Harper
OF – Luis Robert
1B – Matt Olson
2B/SS – Jazz Chisholm
SP – Shane Bieber
SP – Alek Manoah

My question is, I have a few others guys who I could keep, but I’m pretty set on the 7 above. In the group below, would you be interested in replacing any of the above?

I personally like Rogers more than Manoah but I know I could snag Rogers after Manoah and I believe Bieber is going to be back to form. I like Jazz a lot and I like Muncy but nobody else does and his injuries scare me and everyone.

Also, a lot of people are low on Lindor, not just because he’s looking great this spring, but is his value worth it? He seems like a steal in the 3-5 round. I mean, we can’t write off a 28 year old stud on a great team hitting in the top of the order because of one bad season, no?

Ok, a bit to unpack, haha. Thanks for reading/commenting!

one, I like the mix pretty solid group there. Yes, I agree Biebs should be better this year. Two, In theory, I like Mahle the best (over Manoah), but, I think you are right in keeping Manoah since he has more hype around him and more win potential. Three, Rogers and Mahle can both be gotten in the draft at fair value. Four, yes, I think Lindor is discounted this year and represents a fairly low-risk SS that could return plus value at cost. Good luck!

Spot on. Thanks for the accurate assessments and responses.

I don’t know how many Innings Manoah will pitch but it doesn’t seem like a concern + I go pitcher heavy of course. A Razzball narrative.

Thank you and keep up the great work!

I think you nailed exactly how I can improve my drafting (auction). I rely a bit too heavily on values and rarely go over values to get a guy. As a result, in my auction (12 team, $260, 24 active players/team) There were 24 guys that went for $30 or more, and I got none of them. I ended up with a kick ass OF (Eloy, O’Neill, JDMartinez, Arozarena and Gurriel), but unless someone gets injured, I have no room for a break out guy (like last years Adolis). I might be better off grabbing Acuna (or Trout or Bryce) at over value and then having a $1 guy that I can easily replace later. Maybe I will learn and change my ways next year. Meanwhile I will have to enjoy the stats as they roll in.

Glad i could help (the future you)! if you wanted to free up some room you could always trade to shore up another position?

Hey there CW! I thought I was probably the low (wo)man on Reynolds but I see he didn’t make CWT 2… are you basing that on the suckiness of the team, or are you suspecting some average/power regression?

Hey Laura! I like Reynolds just been shocked at how early he’s been going everywhere haha. Yeah, i think there’s a chance his power goes down a little, the average i mostly trust cus he’s been a 300 hitter at every level. And yes, the pirates are pretty awful and there could be some regression there… so you have a 20/5/.300 guy with pirates support

Yeah, exactly what I was thinking… I feel like he has to repeat last year just to earn his current price. I still don’t own him anywhere; wouldn’t have minded a share or two but there’s always been options on the board that I like better.

Thanks! Where would you rank Josh Bell, who’s OF-eligible in certain leagues?

Finally, something to argue about!

Seiya should be higher, have you seen Coolwhip’s post? Don’t answer that!

Couldn’t pay me to draft Starling or Whit

“i HaVe To RaNk ThEm SoMeWhErE”

jokes aside, I have them at end of tier 1 so I’m likely not drafting them anywhere, and Seiya is at the top of tier 2 so I’m likely looking at him as my #2 everywhere

Like the format very much. But wondering why several of my OF (Franmil; Walsh) aren’t listed. Surely these aren’t Tier 5 (with negative CWS); I envision them at least mid Level 3.

These are positions from NFBC… a good catch, I’ll rerun this later using espn/yahoo positions to catch more of the outliers that are keeping positions, Franmil and Walsh would both be a 2

Thanks for the rankings! One question about CWT vs. CW$

I love the CW$ as it indicates how much more you value some player compared to other players ranked below. But there seems to be some tension between your CWT and CW$ as the CW$ difference between players at the bottom of one tier and those at the top of the next tier are often very small (at times zero)

Great question: I simplified the CW$ values to 1 decimal, so in the next release maybe I should add back in another (might make more cents)… Benitendi (off the top of my head) is like .68 and Bader is like .63, I’ll continue to refine the process as we get closer to the season and through the first month.

Thanks for the feedback

Need help picking 4 keepers – here are my options (with the round I’d get to pick them at in the snack draft) Help please!

Thanks! H2H standard 5×5 except for SvHlds. 12 teams. O’Neill, Olson, Burnes are pretty much my locks but having trouble with that last spot.

Bottom 100 OF are ranked with CoolWhomps.