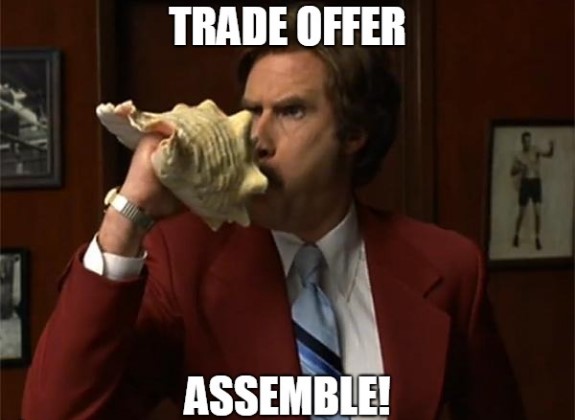 Understand that not every team in your league has a desire to trade. Many very successful fantasy owners prefer not to make trades and build their roster via the draft and waivers/FAAB/FA only.  There is nothing wrong with this approach and many players I respect adhere closer to this model.  Some of these people really won’t trade while others simply do not have or want to spend the time talking trades through.

If you are sending an offer to these owners in your leagues, I’d recommend that you use your best and final offer as you may not get a second chance to communicate with the team. Understand that without any form of trade communication, you will likely have to make it well worth it for them click accept.

In war, then, let your great object be victory, not lengthy campaigns.

We all want to play the game and see how much we can get out of a trade, but you have to realize that sometimes the easiest way is to start at a point much closer to your best and final rather than trying to work up to it.

At any point, if you get the offer you want, TAKE IT. Take some advice from the salespeople of the world and A.B.C., always be closing. On the other side, a bad trade offer can end your trade talks before they even begin, as well as, damage your ability to make trades in the future.

“There is no instance of a nation benefitting from prolonged warfare.”

While you do not need to be in a hurry to trade players from your roster, the longer trade talks drag on, the less likely that a deal gets completed, and the other team may simply give up on trade talks or look for another trading partner. If it is a scenario where two teams are taking turns sending trade offers back and forth, take the time to reach out and see where the disconnect remains.

You must be willing to communicate during trade talks to determine what the other team is looking for, who they are willing to move, and if there is anyone that won’t be traded. As trade talks drag out, it also becomes more likely that one team gets hosed in the deal.

We all know the guy in your league who sends awful trade offers. Of course, then you screenshot that offer and share it with your other baseball buddies to let them see the awfulness that was offered to you.

It is easy to send a snarky comment or an equally terrible trade offer back, but it is more useful to communicate in a more civilized, polite manner. Let that team know you are very far apart on the evaluations and ask if there was something or someone they were looking to acquire in particular. Allow them to explain their position and why they assembled such an offer.

There are people that send over a feeler trade, which essentially acts as a notice that they are interested in a particular player. These people may have never meant for it be a real offer. A relative of this guy is the team that sends an offer and then immediately pulls the offer.

I have pulled this move before, but am always careful to send over a message that I am interested in acquiring x player, and then provide a reason for why I’m pulling the offer. In general, I am not a fan of leaving trade offers open via the league software.  You never know when a player is going to get injured and then that other team runs to click accept before you can cancel it.

As a side note, don’t be the team that sends the terrible offers that get shared around the league and on messages boards around the internet.  General rule, don’t send a player that you’re going to drop the next day or offer up the worst 2 players on your roster in a deal. Even if it is a fair trade offer, it will make you look like the fantasy version of the douche with multiple popped collars and sunglasses indoors.

B_Don is the co-host of the Ditka, Sausage, and Fantasy Sports Podcast on Razzball, and is on Twitter @DitkaSausagePod.