Baseball, like a flower, blooms in the spring.  They also share equally effusive PR people.  Just the other day I read about how a petunia’s branches gained 15 pounds and was in the best shape of its life.  Sure, it’s always good to look at spring training numbers to give you an idea what you can expect from guys during the season — can I draft Ronald Acuna yet?!  Players in spring training are facing the top pitchers who are all displaying their best stuff.  No one needs time to get warmed up.  No one’s trying new pitches or getting a feel for the ball.  They are at the height of their game in the beginning of March.  Our former commissioner, Bud, once doffed his toupee and tried to have the World Series played in March.  Since these spring training numbers mean so much, I decided to look at some players stats so far:

Greg Bird – Hitting .451 with eight homers.  Why have you not drafted him everywhere yet?  Are you avian adverse?  Afraid of eggs and think avian means ovarian?  Did your mom-mom tell you a stork brought you to her doorstep, and have wondered ever since where that stork went and have always felt that stork is an absentee father, so you refuse to draft Bird?

Adam Duvall – Hitting .302 with six homers.  How about we give him an early MVP award and let a computer play out the season?  Can’t Elon Musk work on this instead of building a Taco Bell on Mars?  That is what Elon Musk is doing, don’t fool yourself.

Maikel Franco – Already has badonkadonked six homers.  Glory Bea Arthur, Franco has joined the fly ball revolution!  Not the Fly Ball Revolution, which was a revolt in the 18th century which saw Russian soldiers going around kicking enemies in the testicles.  That’s how the Cossacks got their name.  Any hoo!  No, this is Maikel and it’s break out time!

Paul Goldschmidt – Only has one homer.  Sad trumbone.  All spring Au Shizz has been playing in a bubble to simulate the humidor and we see how poorly he’s doing.  Move hime down to 400 overall and draft Mike Napoli and his mom’s gorgeous breasts instead!

Carlos Carrasco – Has the worst ERA in the history of ERAs at 10.80 through 15 IP.  I didn’t even know ERAs went above 10!  Obviously something is not right, and it’s time we just accepted it’s better to just draft Robert Gsellman, who has a 2.31 ERA.  Yes, Gbuy Gsellman!

Oh, please.  This is such nonsense.  Now we get to grade everyone’s reading comprehension because these are LAST YEAR’S spring training stats.  If someone can read everything but capped words, I apologize in advance if you draft Adam Duvall.  (I DON’T.)  I like to do this post every year because every year I get the same comments about how well a player is doing in the spring and if I’m going to change my fantasy baseball rankings because of it.  Spring training stats are a joke.  They mean nothing.  Let me say it again for emphasis, spring stats mean nothing.

Bird had the best spring training in the history of spring trainings last year, and that led him to do what last year?  Adam Duvall looked ready to follow-up his break out in 2016 with last year’s spring, and that led him to losing his full-time job.  Maikel Franco is talking about hitting more fly balls this year.  Sure, just like he did last spring and went on to have another poor season.  Goldschmidt struggled to hit for power last spring, and went on to have his biggest power year.  Carrasco?  Did he seem phased by last year’s spring?  Yeah, and how did Gsellman do?  You should only be looking at who’s healthy, who’s winning position battles and who’s winning rotation spots.  The rest is meaningless.

It’s great Jason Kipnis has a bazillion home runs this spring, but bazillion isn’t even a real number, and who knows if Kipnis’s newfound stroke is real either.  More than likely, he’ll turn back into a pumpkin in April like Mr. Grapefruit, Billy Butler, always did.  Speaking of which, here’s the most relevant spring training graph: 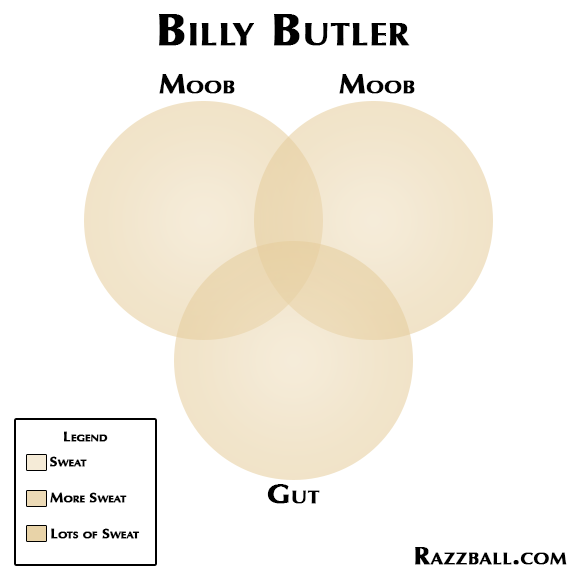