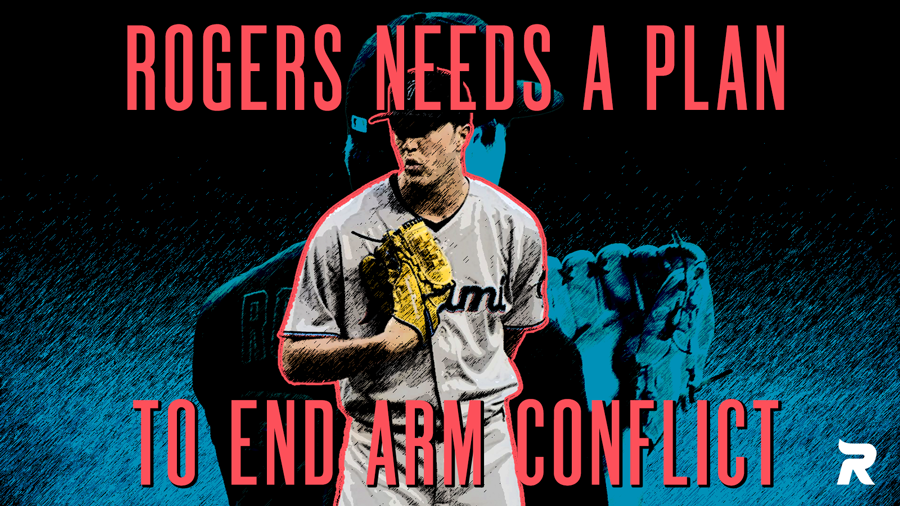 Last year after showing up to camp with improved velocity, Trevor Rogers was a huge breakout pitcher. I was lucky enough to grab him on a few teams and thusly reap those benefits. He was touching 97/98 mph after previously averaging 93 on his fastball. The velocity gains proved to be a difference-maker. Many lefty pitchers with a good changeup can find success, and Rogers’ 70-grade change is no exception. Now with the boost to his velocity, he became a star. A nasty change and plus velocity is a lethal combination. Rogers was red-hot for the first half he posted a 2.31 ERA and a 30% K-rate over 100+ innings of work. But after that, had rough second half.

Trevor Rogers’ struggles in the second half are well noted in part due to a difficult time in the family. That’s enough burden for anyone to bear, let alone all at once; furthermore, attempting to pitch through. Life wasn’t his only issue as he was also well beyond his innings of 28 the year before. Miami probably should have shut him down at 100 IP but he came back and through 33 more to finish the season. And it was, as you would expect, less spectacular.

Clearly, he tired out with arm fatigue and lost some focus. But I think there’s more to it… 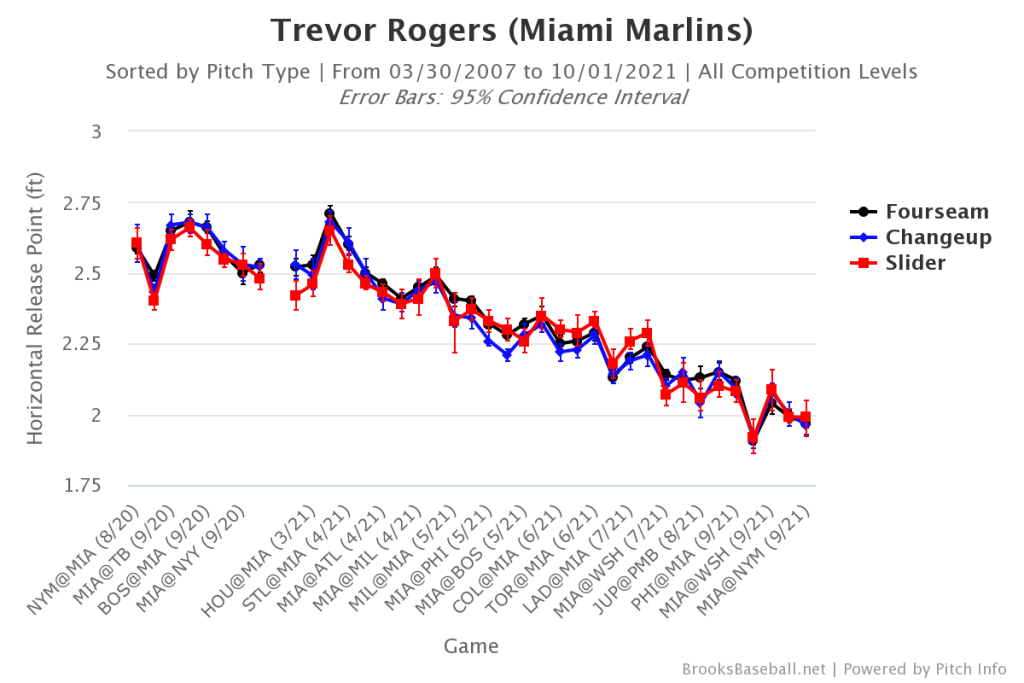 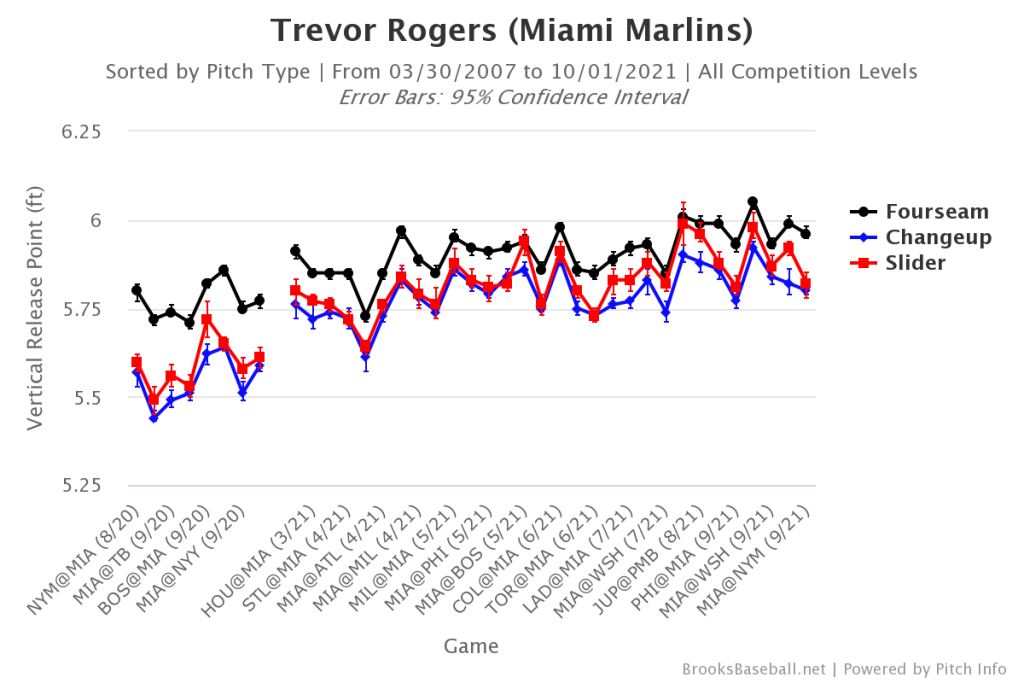 The combination of those two values = arm slot. As the season went on his arm slot changed, or perhaps a better word is “degraded.” As his three-quarter/horizontal release became more vertical, Trevor became less effective. This begs the question, was this due to fatigue or by virtue of the coaching staff. Was it meant to help him make it through the season, who knows? I suspect it was through fatigue due to the gradual shift over time by reaching his innings wall. It is clear that the results inversely correlate to his shifting release point. The more horizontal his release the more deceptive his pitch. The more vertical, the more he got hit.

But what really caught my eye, is what I see happening so far THIS year that’s new… 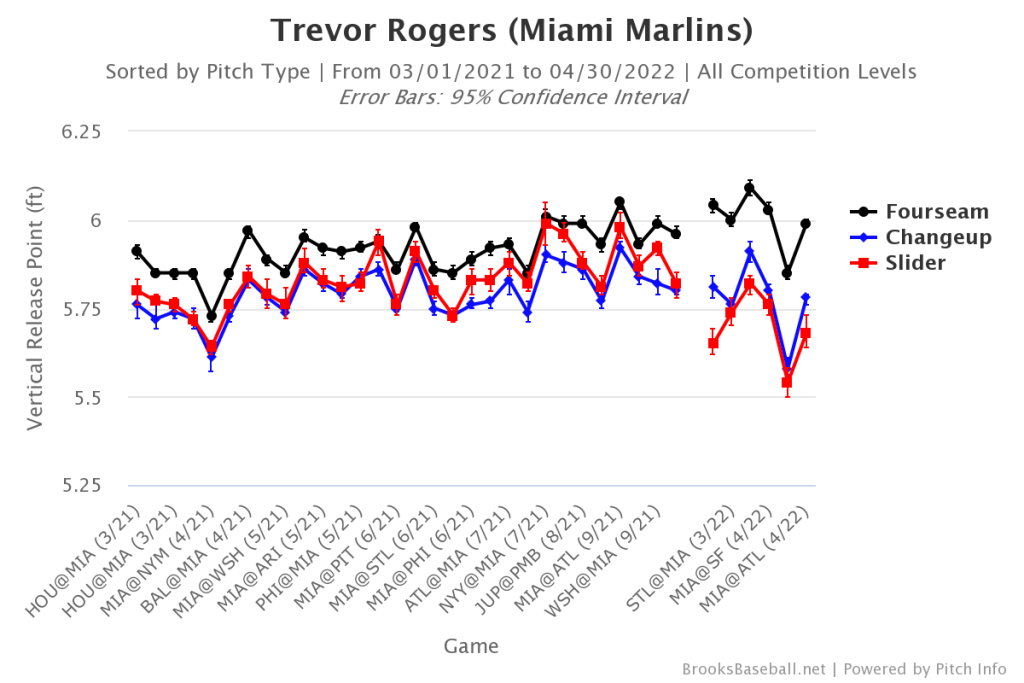 It looks to me like Trevor Rogers is tipping his fastball. He’s corrected his release on breaking pitches but the fastball has continued to be high and could be due to his desire to keep his finger pressure over the top of it to maintain spin. There’s roughly a 3-inch separation between his fastball and his breaking pitches; most of which is his slider. This is potentially a big problem if the fastball is the odd one out, allowing opposing hitters to zero in on it.

Last season opposing hitters only managed a .222 BAA on Rogers fastball. Through 3 starts in 2022, hitters are carrying a .333 BAA. Yes, it’s early, but it could become an issue if not addressed. The change was not working well in his start against the Phillies and he got eaten up. Luckily, in his last start against Atlanta, his change was working well and he was able to avoid big innings. I’m not saying he can’t fix this, but if he doesn’t there could be more blowups this season, and more often.

There is a silver lining of hope though… 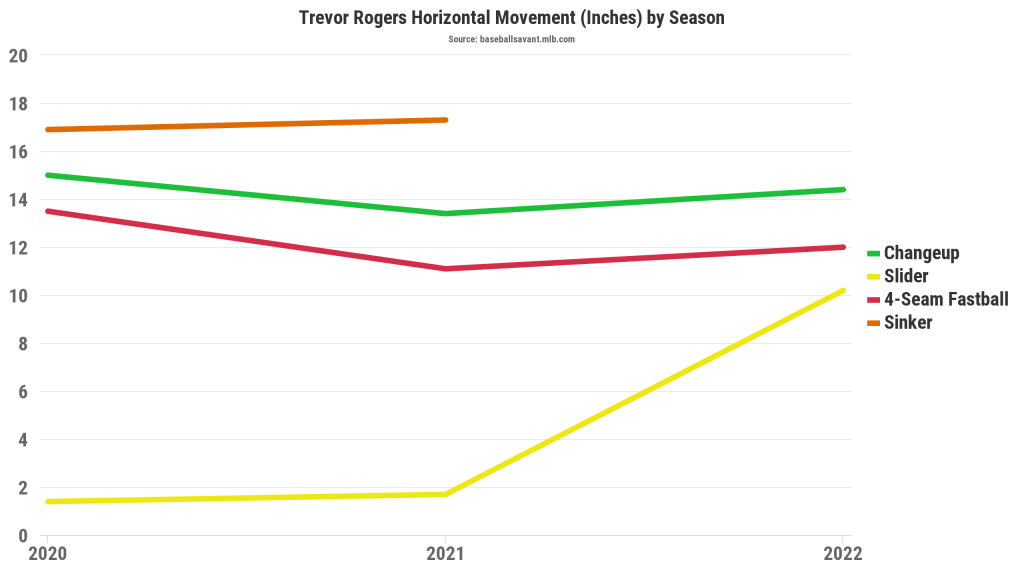 Rogers seems to have changed the shape of his slider. His slider is now getting an additional 8 inches of horizontal movement. What does this mean? Here’s what I wrote last season in the piece about Manaea changing his slider:

“This is important because in order to have an effective slider the pitch needs to pair well with the corresponding fastballs. If your fastball has a lot of arm-side run then a sweeping slider would play off its strengths pairing split horizontal movement. If your fastball is more rising or true then you could benefit more from the deception of a ‘hard-slider’ like a cutter with more late movement.”

Using my Grey voice “and that’s me quoting me.” *cackles loudly* Anyway… Trevor Rogers gets some decent arm-side run with his fastball, so adding more sweep to his slider could make it a more effective pitch pairing, but first, he needs to get a handle on his release point. Habits are hard to break, so how long it takes him to correct this new trend is anyone’s guess.

He’s only pitched 11.2 innings thus far, so hard to pull too much from it, but he’s allowing walks and getting burned by them and not getting near as many whiffs despite it being early and many hitters still trying to find their timing. His K-BB right now is only 5.5%. This last weekend’s start versus Atlanta was a step in the right direction with his changeup being used more than the slider which was a key to his success last year. But he was also fortunate to avoid a big inning early.

Once the rest of the league catches up he could get himself into trouble if he doesn’t correct his mechanics soon. I might be hesitant to start him against stronger/deeper opponents that could be picking up the different release point on his fastball until hope is restored. You could ride it out and hope he fixes this and be fine, sure, but there’s no telling how long it will take to get right. The new slider could help some too; but, rookie pitchers sometimes never catch that lightning in a bottle again. Would I trade him? Depending on what I could get for him, it couldn’t hurt to explore options, especially after this last game in which he may have gained back some of his perceived value from last year prior to the next shelling.

Always good work, cw. How does the release point look this season?

thats the second set my guy, “the tip” his release point on breaking balls returned to where it was at the beginning of last year, but his fastball is still “off”, thus the separation and the “tell”

all good my guy

Would you trade Rogers for Andrew Vaughn or Yelich? Or hold?
I’m leaning Vaughn because I could use a RF if Julio Rodriguez doesn’t do what we expected going into the season

I’d want more than Vaughn, not sure about Yelich yet. hold for now

Even in a keeper? I could see not wanting to chance him in redraft, but….. Seems like a pretty easy fix.

Keeper is a different story. They could have similar value long term, I feel a bit more confident with Mahle’s innate skill though.

My league only allows keeping players who were drafted and never dropped, so if its close, I’m probably batter off standing pat.
Thanks.