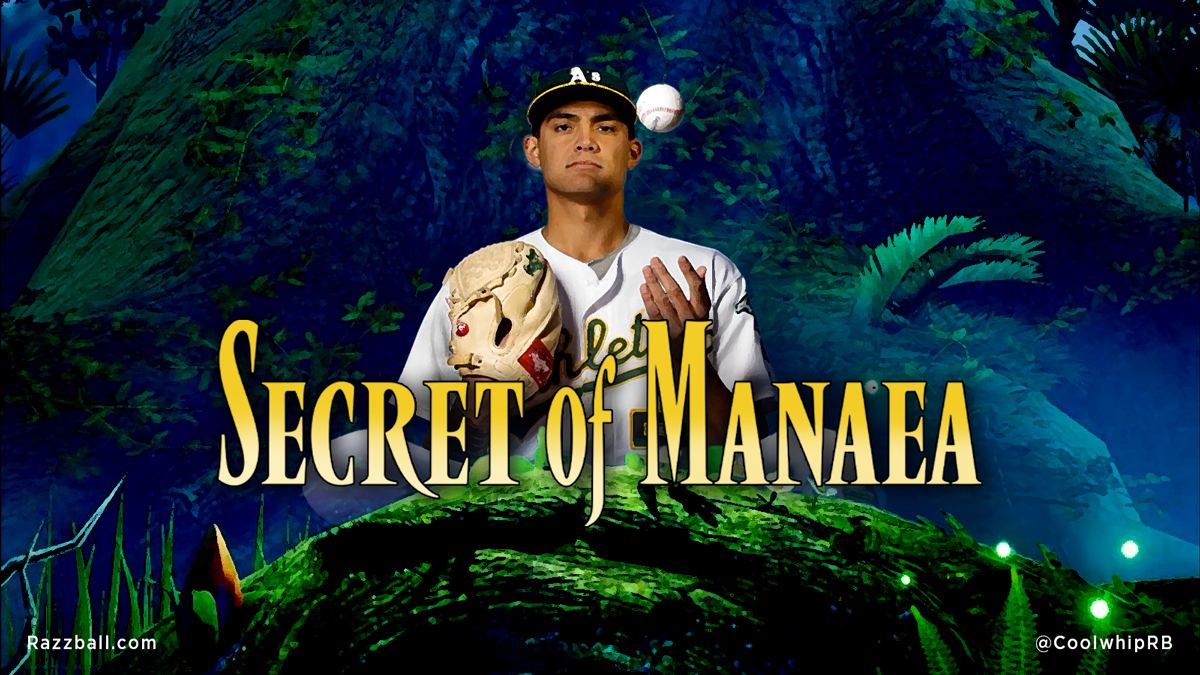 So I was sitting there on my porch drinking coffee this weekend thinking about a dream I had. In said dream, I was sitting at a small streetside cafe in Morroco, also drinking coffee. It’s a beautiful spring morning and the local street vendors are cooking the morning grub. The tasty aroma hangs like a cloud over the bazaar. I’m sitting there contemplating starting pitchers and who might be a surprise this season no one is talking about. Someone without a lot of flash that’s easy to spot, but low-key doing something different that doesn’t completely show up on the stat sheet. And while I’m staring at the clouds (debating this most serious of missions), a little Morrocan girl runs up to me carrying a bright turquoise bag and empties the contents on my lap.

I’m shocked! What is this little girl thinking? Where are her parents? Why is she carrying so many things? Did this silly American offend some local custom? Is this causing a scene? and most importantly… did she spill my coffee? (No… phew) she pulls out a large seed and sets it on the table… okaaaaay… *puzzled look flows onto my face* “What’s this?” I say. She then beckons me to lean over and whispers in my ear, “Sean Manaea.” And then it all made sense. I had gone to waiver wire so often for streaming double-duty, I completely overlooked a growing power.

For the past few seasons, Manaea hasn’t been in our sights as a pitcher to the roster. He’s typically had decent command but took a step forward in 2018 by lowering his BB-rate below 2 for the first time. However, he’s carried a pretty meh K-rate that has hovered below 8 for the majority of his young career. In a brief showing during the 2019 season, he flashed a K-rate above 9 while keeping his BB/9 in check. Okaaaaaay. Small sample? Maybe so. In 2020 he reverted to his previous ratios and once again was very meh.

That brings us to 2021. Manaea is off to a good start and looks to be flirting with a 9 k/9 again. Check. Has his BB/9 under 2 again. Check. And three, he’s still keeping the home runs under control. But the question then becomes, is this just a small sample spike or is there something different about him that could be the beginnings of a breakout season. 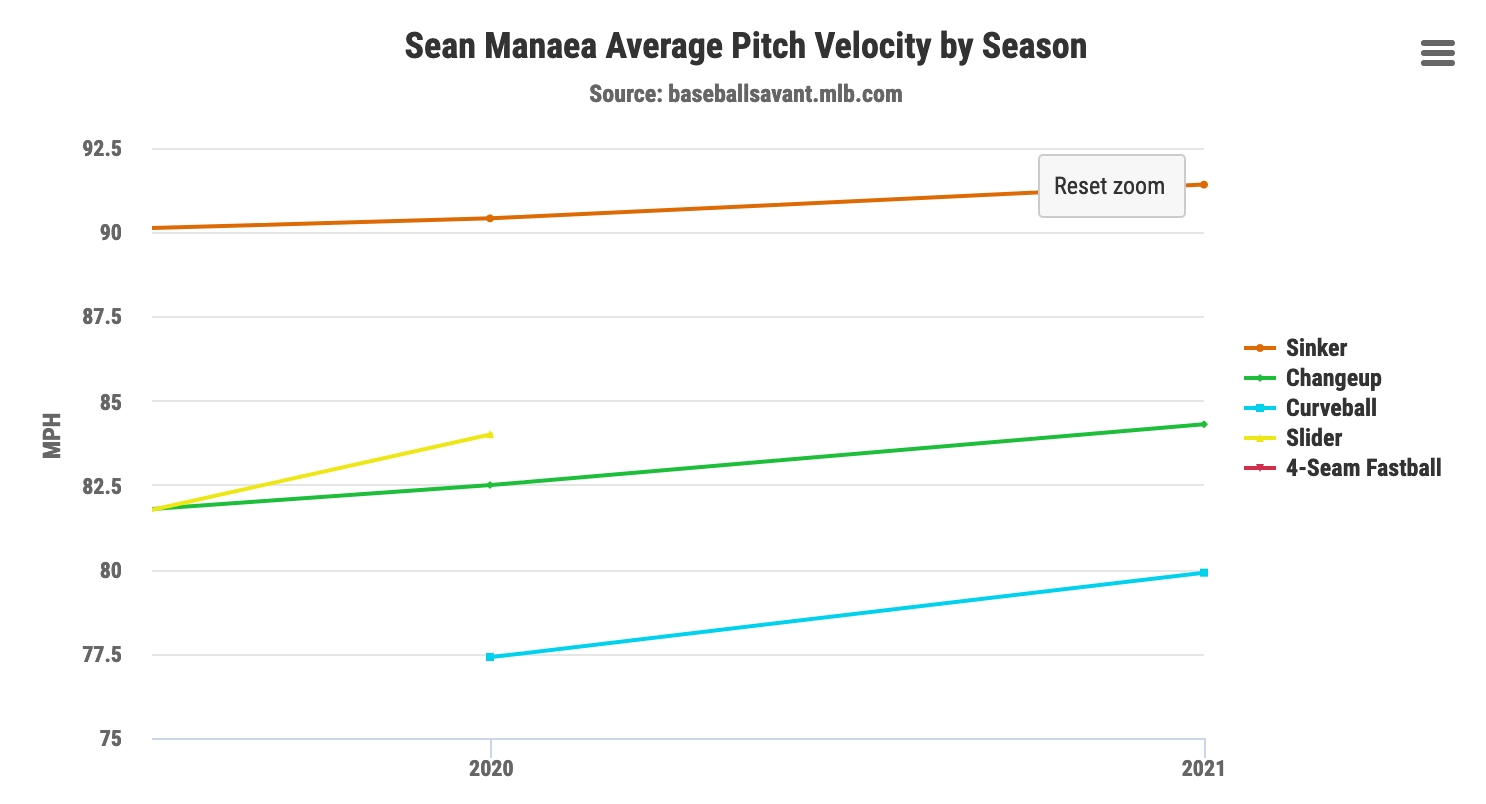 Looking at his average velocity we see a yearly uptick the last few seasons including the beginning of this season. Last year his sinker averaged 90.3, and so far he’s up to 91.4 in the early going this year. Velo gains are almost always a net positive (and velour jumpsuits are almost always net negative). Then I notice something different… in 2020 he made a change to his slider enough that statcast is reading it as a curveball. This is in part due to the drop in velocity which is possibly a positive in his case, making it more distinct in speed with his change, and possibly a change in movement or rotation…hmmm. A greater separation in pitches can often lead to them becoming more effective. 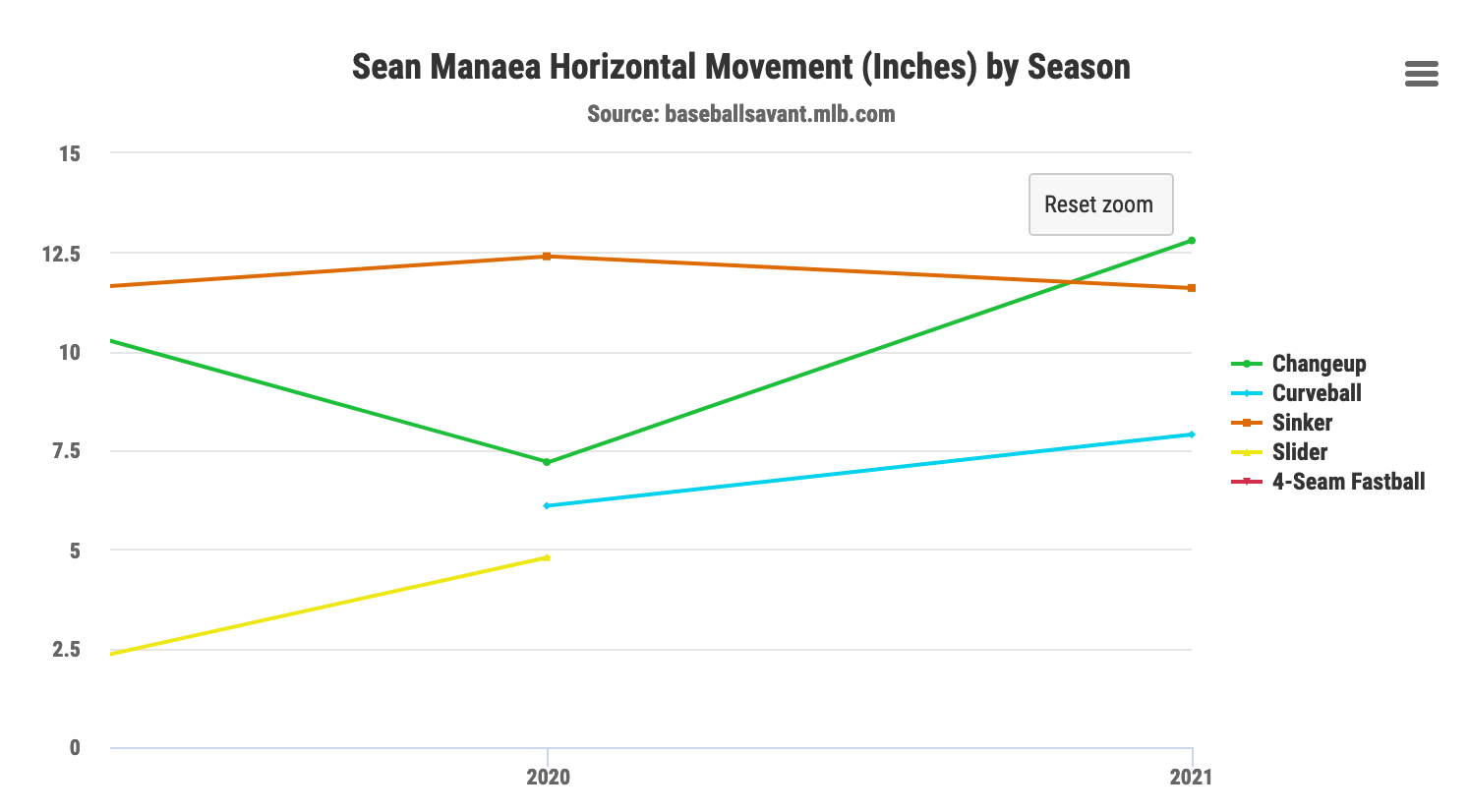 Manaea now looks to be getting more horizontal movement on his offspeed pitches. His change has added over 5 inches of movement compared to 2020, and his slider has added about 2.5 inches. That could be a big factor going forward. When you don’t have overpowering velocity as a pitcher, you need to gain the upper hand on batters with movement and deception. He looks to be getting more movement now, so has he also found a way to be more deceptive?

This brings us back to the wonderful new statcast spin chart. You may remember my introduction of it from the Joe Musgrove article here. Refer back there for the basics. Anyway… this is a fantastic new tool for understanding how a pitcher throws their pitches and how the pitches work in relationship to each other. The bigger/longer the bar, the more spin, and the direction of the bar indicates the direction of the spin (backspin bars go up, topspin bars go down). So looking at the above comparison, what does it tell us about Manaea’s pitch arsenal adjustments?

Despite the fact that he is generating more spin on his sinker, he still falls into the bottom 5% in the league on fastball spin. This is important because in order to have an effective slider the pitch needs to pair well with the corresponding fastballs. If your fastball has a lot of arm-side run then a sweeping slider would play off its strengths pairing split horizontal movement. If your fastball is more rising or true then you could benefit more from the deception of a “hard-slider” like a cutter with more late movement. And if your fastball has a low spin rate like Manaea, a slider with more gyro spin (bullet spin) would add deception through a low active spin…. meaning… the spin is impacting the movement of the ball less. The batter suddenly sees a pitch with more spin than others and anticipates it moving more than it actually does or in a different direction than expected.

This is where the player’s arsenal and pitch design work together. Either Manaea or someone in the A’s organization may have finally figured out how to get the best out of his offerings.

As of right now, I see Sean Manaea rostered in 77% of Yahoo leagues, and in other leagues, he may be currently used as a frequent streamer *hand raised* but if this is the start of a breakout then he could be more valuable than many teams’ SP4/5. The seeds of something more magical are there.

Goes down like fresh cure water during that first Spiky Tiger fight.

Coolwhip
Author
Reply to  The Itch

I echo FireRobManfred’s statement above; outstanding.

BTW, I’m #3 and #4 in my two Bestball leagues. I’d normally be proud of myself until I look and see that you’re #3 and #1 in those exact same leagues. I’ll have to (cool)whip my teams into better shape.

Hope all is well. As always, the info’s big time appreciated.

Thanks Jolt! appreciate you.

I need people to flock to this article. FLOCK, PEOPLE, FLOCK!

I have nipples Greg, can you milk me?

Oh my god I love this reference/photoshop.

Thanks! and thanks for reading!