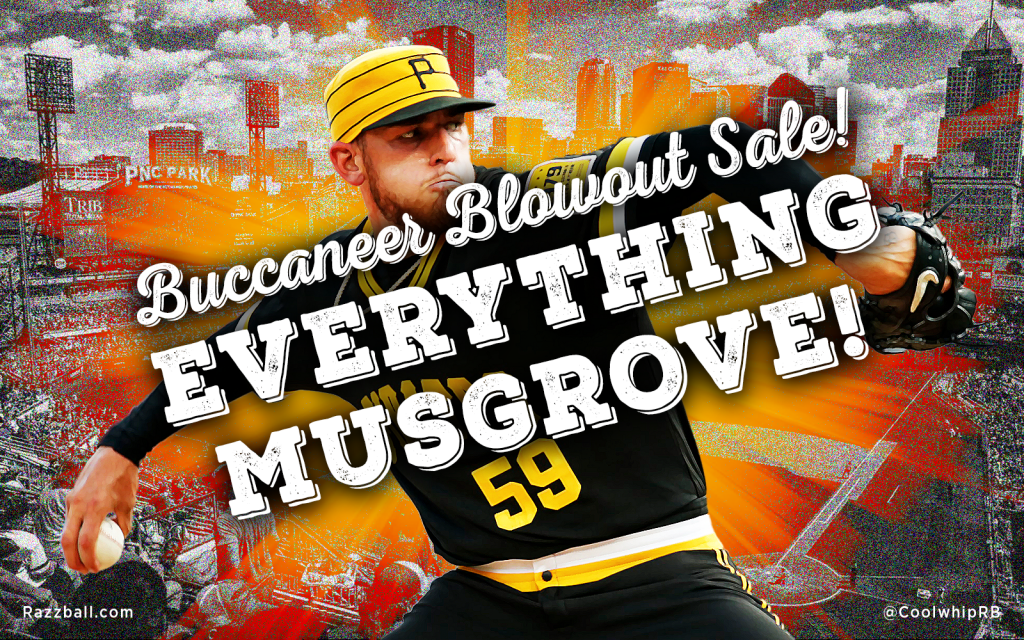 The Cubs are cleaning house even though they are a big market team. The Reds are seemingly red-tagging the store after going all-in for half a season. The Brewers have made zero moves to improve their lineup around Yelich. The Cardinals, too, have also done absolutely nothing. And now the Pirates have jumped on board with the neighborhood garage sale to boot, after offloading Josh Bell. In a year when the entire NL Central feels like sellers or doing nothing, of course, the Pirates go into full teardown mode again… after, well… never emerging from the last full teardown or the one before that. Does anyone want to win this thing?

“We like to remove all expectations because nobody is ever disappointed,” says Pirates owner Bob Nutting. Aren’t we all though Bob? At least, that’s what I picture him saying. He’s certainly de-nutting his franchise. Is this what we want baseball to be? You have this clown investing nothing, while 4 owners vote to keep Cohen out of ownership? Are you kidding me?

Anyway, I digress. This isn’t about team ownership (OR IS IT?), this is about the swelling rumors that the Pirates are not done collecting underage minors for above-average talent (and Epstein didn’t kill himself). Specifically this about Joe Musgrove and the, what feels like, annual sleeper/hype post for him. Only this time, *waves hands around in a circle* with the high likelihood that he’s pitching for another team that doesn’t preach pitch-to-contact, the possibilities abound after what we saw in the last month of the season in 2020. What did he do? I’ll show you!

So his K-rate jumped to easily the best mark of his career (albeit a small sample) and his “deserved” ERA numbers the lowest ever as well, and yet once again results were several ticks worse. Last season for him was not created the same. He started out of the gate rough, but then came back and finished strong. He missed that time in the middle, due to injury. As we heard from Garver, the offseason workouts were atypical to say the least and soft tissue injuries were more common.

Joe had an ankle issue that was lingering since the start of the season. On top of that, he started having some triceps tightness in his throwing arm. He was pulled from his start on August 4th in which he gave up 5 runs on 6 hits and 5 bbs across only 3.1 innings of work. This contributed to two vastly different showings…

When he came back… owo… that stat line is fire emoji. With Musgrove last year, there’s the launchpad that occurred before the IL and the filth he was throwing after when healthy. 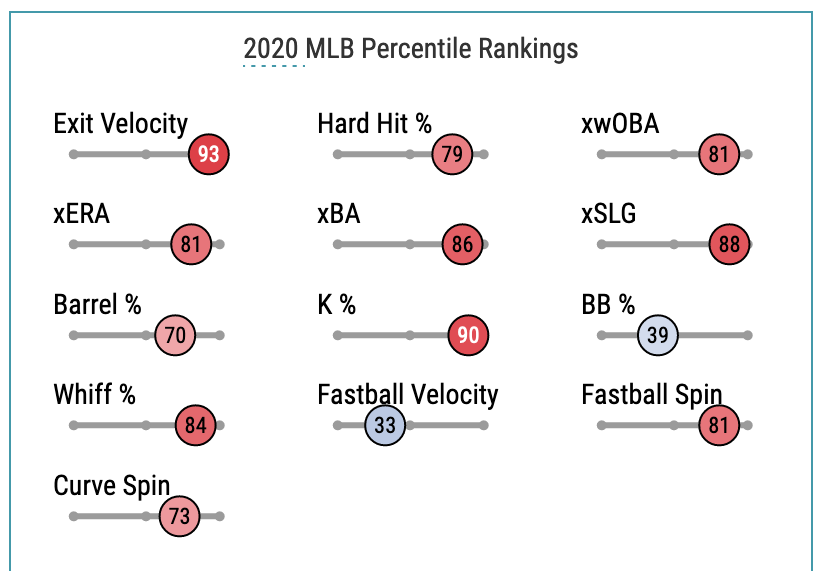 So even given the rough start… his percentile ranks ended up looking like this in 8 starts compared to the 12 most other starters had. Blah blah blah, small samples. For sure. Also, due to the COVID regional alignment, he only had to pitch to the central teams. The same thing was the story with the performances of Darvish and Hendricks but no one is batting an eye with them. Needless to say, this is what a top tier pitcher should look like. That said, his fastball isn’t the best as you can see… but we’re getting to that.

This last season Musgrove started throwing his fastball and cutter less and began throwing his slider and curveball more. His breaking pitches have been his best offering. And now that he has mastered it more, he is has been able to dominate hitters, generating 51.6% whiffs on those 2 pitches combined. The curve is easily his best pitch, which he featured at an all-time high of 19.9% of his pitch mix. By reducing his fastball usage and incorporating the breaking pitches more he was getting better results.

Here you see on the chart that he’s been increasing his curveball each year since 2018, and the same for his slider. Also since 2018, he has decreased his overall dependence on his fastballs (4-seam and cutter) for the first time below 50% of his delivery. Now, as of the 2020 season, his pitch mix resembles the same template/scheme of Aaron Nola (another pitcher who generates a lot of whiffs with his curveball) and RP Miguel Castro, plus to a lesser extent Corbin Burnes. The question then becomes, what makes this formula work?

descriptive diagram thanks to Mike Petriello

Baseball Savant has recently released a new tool that visualizes pitch spin movement for the first time. It’s real, and it’s spectacular. What see here is from the hitter’s perspective. The 4-seam fastball in red is spinning backward towards Joe. And the curve has topspin going forward at the batter. The key here you see is that his fastball and curve are essentially spinning on the same axis; one forward, one backward. This is called pitch mirroring. When you have pitches that mirror one another, the seam lines appear the same making it difficult to distinguish the 2.

Here’s why Joe Musgrove is filthy. His slider and curve have nearly the exact same spin (left graphic), but move in distinct directions (right graphic). The same goes for the fastball and sinker/change. The left graph is overlayed in primarily 2 directions of spin… yet the observed movement of the pitches split off in all directions. That is pitch deception at its finest and can lead to top tier pitch tunneling. That is how Musgrove was able to generate an elite K% without elite velocity. There are only 3 SP in the majors with this double layer of pitch mirroring; Shane Bieber, Joe Musgrove, and Alec Mills. If only Joe wasn’t on the Pirates…

Musgrove just agreed to an arbitration salary of $4.45M, the last time the Pirates paid arbitration to a pitcher he was sent the next day to Houston and became an elite pitcher the following season… hmmm. You might know of him, Gerrit Cole. If he ends up traded to a team that has handled pitchers well, we could be looking at a top 20 pitcher for 2021.

UPDATE: What’s that you say? The Padres traded for another starting pitcher??? AJ Preller has gone mad! And they still haven’t been forced to give up MacKenzie Gore. Amazing. So Musgrove to the Padres is one of the better scenarios that could have happened to him. San Diego is mostly a neutral park now except during May, June, and early July it still plays like a pitcher’s park due to the marine layer that moves in downtown in the evenings (local insider info here!) and that’s great.

He’ll be covered by a decent bullpen and the loaded Slam Diego lineup that will no doubt carry him to some wins. The division is not as light due to the Dodgers and the possibility of some Coors starts, but anything is better than the Pirates at this rate. I’ll give Joe Musgrove a projection of 13-8/3.78/1.22/178 IP/187 Ks with a chance for more in front of his hometown crowd.