This week, I want to bring up a topic before it blows up my comment section as it seems to every season.  This is something veteran RCLers will recall (and likely will be utilizing) and you’ll also be familiar with this concept if you’ve ever played a Yahoo league with an IP limit.  The idea is that you can maximize your pitching counting stats by manipulating the day you go over your 1400 IP.  In the ESPN days, this was manipulating the day you went over the 180 GS limit by getting to 179 GS and then loading up 9 starters and hitting 188 GS.  The same thing applies here with the IP limit (and also in Yahoo leagues) in that on the day you go over the 1400 IP limit all of your pitching stats count for that day.  So, let’s say you work it so you get to 1398 IP, then you load up 9 starters the next day.  If all 9 starters last 5 IP, you’d hit 1443 IP and thus gain an extra 43 IP of strikeouts and possibly earn an extra win or two along the way.  The risk is obvious.  It’s hard enough pulling one streamer out of the free-agent pool that won’t obliterate your ratios, never mind nine!  Unless you are holding a slim lead in the ratios that you don’t want getting ruined, there’s not much to lose in maxing out your stats though.  So far I haven’t seen any teams who have utilized this to the max, two teams had five starters go on their limit day with each getting over 1420 IP.  Vin and I will be keeping an eye out these final weeks as I’m sure a handful of teams will make the move.  I’ll be trying to pull it off with a few teams provided I can stream 50 IP per week to finish things off.  Best of luck to anyone who pulls this strategy off!

Laura and B_Don each dropped a spot this week as Cram It and Grey made some last-ditch moves in the standings.  Grey had a nice week of offense to tie him with Son for the most points gained this week (3).  I had a fantastic pitching week but have no standings points to show for it.  Son and CA are too far ahead in WHIP to catch and CA is killing the ERA game.  I may have a shot to pass Laura in ERA if she melts down the final weeks, but I don’t think I’m getting any higher than 113 in this league.  Still, a ‘Perts League win is something I have yet to achieve in my RCL career and it would be a nice feather in the cap to finish this thing off.

Speaking of finishing it off.  Our top ten in the Razzslam are looking to finish strong.  Francisco Maldonado had 200 more points scored than the nearest competitor this week as they rocketed into second place with 2+ weeks to go.

Wake’s lead…it grows.  Wake is streaming his buns off and gaining Master Standings points like a boss while my DFSers team rides the roller coaster of the final weeks and ended up down a half point.  I was up to 107 at one point this weekend, but couldn’t finish it off.  What I thought might be a close battle could end up a runaway for Wake if I can’t pick it up.  Otherwise, the top three remains unchanged with my Perts League team chilling comfortably in third.

AllRice remains in sixth for another week while Young Guns climbs back into seventh after a one week dip.

Rounding us out this week is a newcomer to the top ten, Mr Big & Bud Goode.

No new records this week, but it’s always fun when the weekly ERA is lower than the weekly WHIP.  Speaking of WHIP, Vin noted a nice stat this week, team RBV lowered their WHIP from 0.993 to 0.983 as they try to be the first team to finish a season under 1.  That would be quite impressive to pull off!

Summary: I could have given this to Wake for another week, but he’s won enough and will probably end up winning enough, so I decided to go with foulballs this week who had better ratios and slightly better offensive numbers.  Wake had more IP and more strikeouts/wins, but I think foulballs were more well-rounded.  Plus, let’s lift some other teams up, so, foulballs had a heck of a week and is running away with RCL #46.  The rich get richer.  The stellar week also boosted the balls from 41st overall to 20th!  Bash bros, Aaron Judge and Yordan Alvarez led the way on offense while Jose Quintana and Michael Wacha had nice pitching performances, just like we drew it up back in March.  Nice work, foulballs.

I have 8 starters going today. I am tied for 1st at the moment. EESSHHH League #14

My 8 starters from yesterday pushing me to 1450 IP 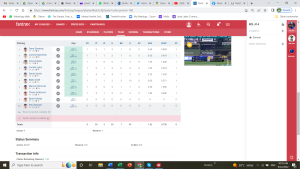 Los Boricualizers are coming for the Razzslam title!! If I win this thing while relying on Austin Nola as my second catcher i get bonus points for 2023 razzslam

Ha! It was a hell of a week you had! Good luck!

Thanks for the nice write up, appreciate it

With the appearance of Mr Big & Bud Goode in the top 10, I decided to look back at the July trade which caused some minor angst.

Ha, that is a pretty bad trade, but *shrugs* people have to play their game

I should have realized that was a bit much this late in the season, all fixed, thanks, Vin!

Hell yeah, Wake! Get that title!

He has a shot to go perfecto if Vin chokes away his 28 Runs lead the final two weeks! Crazy!

Haha, that is bonkers…What a year

I asked Wake for $5 to bench some players, but he wouldn’t go over $3.

HA! I’m going to have to start a bidding war for other teams to pick up the pace over there. are there any teams in his league that might fail to hit the IP limit and drop the LCI?

everyone in DFSers is already over 1,000

Grey, so glad to see you in the top half of the ‘Perts League. ‘Cuz if you weren’t, I’m afraid relegation rules would require someone else to do the Daily Notes next season … Dan Pants?

All kidding aside, appreciate everyone in the Razzball team that help make RCLs happen (special hat tip to MattTruss and VinWins)