Happy Wednesday gang!!! The non-waiver trade deadline is now upon us – deals have to be completed and submitted to the Commissioner’s Office by 4:00 PM eastern tomorrow, so we should gain a lot of prospect clarity over the next 24 hours. Time for another Panning For Gold: Finding The Prospect Hidden Gems, our weekly look at some of those lesser-known prospects that are beginning to generate the type of buzz that starts their climb up organizational ranking lists, leading to more discussion about them in more well-known circles. Think of these guys as players you may not necessarily have at the top of your lists in shallow keeper leagues, but names you’ll definitely want to keep an eye on, the types of players you can wind up scooping up before your mates in your quest to become another fantasy baseball “guru”…respected and adored whenever draft time rolls around (not to mention mumbled about under your opponents’ breath) for years to come.

This week we’re going to shine the light on Brandon Nimmo, an outfielder for the New York Mets. 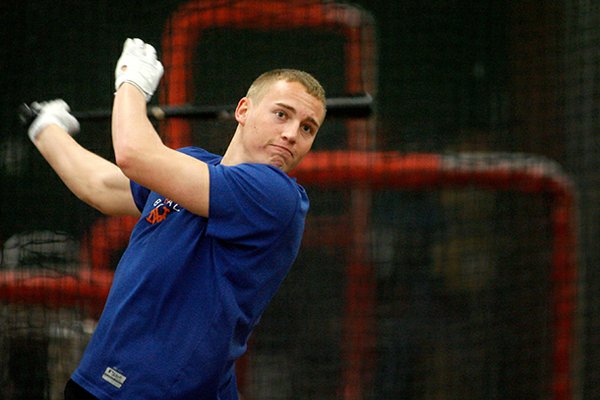 Nimmo was the Mets’ 1st Round pick in the 2011 Draft (#13 overall) from Cheyenne East High School in Wyoming – he  was one of those truly “under the radar” signings considering the fact that Wyoming doesn’t have organized high school baseball. Brandon comes from strong athletic bloodlines (his Father wrestled when he was in college, and his brother was an OF for Nebraska’s 2005 College World Series participant), running track at Cheyenne East during the school year until American Legion ball started up during the summer months. He became the first-ever First Round pick from the state when the Mets called his name at the podium.

While he’s not one of those prospects with a particularly loud tool, Nimmo strikes scouts as a “baseball player” who doesn’t have any particular holes. He reminds many of Daniel Murphy (a current Met with the same type of skill set), as a gritty player that can do a lot of things to help you win ballgames. His best tool is his eye and approach, posting OBPs of .372 and .397 in Short Season ball and last year in the SALLY League respectively.

Assigned to St. Lucie in the Florida State League (Hi-A) to begin this season, Brandon slashed .322/.448/.458/.906 with 9 2Bs, 5 3Bs, and 4 HRs with a 50/51 BB/K Ratio and 9 SBs in 12 attempts prior to receiving a promotion to AA Binghamton. Typically a gap-to-gap hitter, his over-the-fence power appears to be developing, evidenced by the 5 bombs he’s hit in 126 ABs since moving up a level. His overall slash line has suffered a bit as he’s adjusting to more advanced pitching, but his patience and eye have remained sharp (23/31 BB/K Ratio).

The Mets don’t appear to be much of a threat to be a playoff contender unless their financial situation improves quicker than expected, but if his power continues to develop Nimmo could slot in as an everyday OF in Citi Field as early as Opening Day 2016 if not before. He’s spent the majority of his development time thus far in CF and has been adequate there defensively, but probably profiles better as a corner guy that could be a good fit in the #2 hole in a lineup given his eye and ability to handle the bat. While he’s not a “sexy” player with big power or exceptional wheels, Brandon has a good chance to turn into one of those all-important “glue guys” who can really help a contender by constantly putting pressure on opposing Pitchers and keeping the line moving for the bigger threats in your lineup as well as hurting you when you make a mistake.

I just made a playoff push trade in a dynasty (gave up alcantara, corey seager, archie bradley and addison russell for Pujols and the adverb)… net result is that for this dynasty, i now have 2 empty NA slots (we can only keep up to the regular bench, so to keep the NA guys you have to cut another guy… for me, the boarderline guys are Kuroda, Neise, and Garza- all currently rostered for pitching depth- massive bench means that about 120-140 SP are owned)

After that massive set up, to replace the departing prosepcts, I have a few options- who would you choose:
SP- Urias, Stephensen, Barnes, Cingrani
hitters- swihart, mondesi, hanson, liriano, cecchini, alfaro, meadows.

I can fit 2 into NA slots, who is the best long term grab

Thanks. I made the trade expecting to add Urias, thinking he is maybe a half step less valuable than Bradley (similar upside, but way way further from the bigs).

In an AL Only Keeper League with 12 major/4 minor league keepers. I had Cosart (streamed him) and so I have rights to Marisnick, Moran and Martes. I think this may have been lucky but am hoping to get your opinion.

Are any of these guys worth stashing? Currently my minor league talent isnt the greatest as I am 2nd in the league and have traded for veterans…which has actually worked out. Anyways my minor leaguers right now are Clint Frazier, Henry Owens, Brian Johnson (Boston) and Billy Burns (just picked him up for SAGNOF recently).

Any thoughts are much appreciated,
Turd

I like Marisnick a little. Moran’s a good hitter, just not your prototypical 3B power guy – more of a Chris Johnson comp. Martes is quite a bit of a wildcard, and won’t contribute anytime soon. I could see keeping Marisnick over Burns, and maybe even Moran over Frazier (although that one’s probably a coin flip for me).

Brian Johnson time? Now that some pitchers have been moved out in BOS?

Probably not immediately – the Sox got Joe Kelly back in the Lackey deal, Workman gets one slot, and De La Rosa, Ranaudo, and Webster are all already on the 40-Man Roster.

I really like what Boston’s done here at the deadline – given their always enviable financial standing they’ve added two serious bats (I fully expect Cespedes to agree to an extension before next season after he hangs out with Ortiz for the next two months) while adding even more impressive arms (Kelly and Eduardo Rodriguez) to what was already the strength of their system in Pitching depth. They’ve compiled a large number of #2/#3 SPs. Even if none none of them they still become an instant contender by adding those bats and turning around and throwing $25 million per at Scherzer, Price, re-signing Lester, whomever to front the rotation.

It was still a bad pick, Jose Fernandez went with the next pick, Cron, Sonny Gray and Matt Barnes shortly after. It was not a matter that Nimmo should not have been drafted, but most experts saw him going about 10 places lower. the mets do have a history of drafting kids like this (guys with solid hit tools, but no signature skill), and it has resulted in the mets have a lot of across the board mediocre players with nothing to hate them for, but nothing to get excited about (who drafts a 1b prospect with no power? the answer, the mets)

I’m not quite sure you can call it a “bad pick” yet – you can’t look at individual picks in a vaccuum (particularly when you’re comparing one player who’s reached MLB to one that hasn’t yet). Using that logic (the team that wound up with the most talented player thus far), all 13 teams that drafted ahead of the Marlins mad “bad picks”. Funny thing is the Pirates wound up with Cole, the Orioles wound up with Bundy, the Nationals wound up with Rendon, the Diamondbacks wound up with Bauer and Bradley, the Indians wound up with Lindor, the Cubs wound up with Baez, and the Astros wound up with Springer – I don’t think I could call any of those “bad picks” even though they aren’t (yet) as good as Fernandez.

For all of us who tanked this year in keeper leagues, is there any plans for an updated keeper rankings write up any time soon? Keep up the good work

Which Cubs prospect makes the biggest fantasy impact in 2015?

Is the 70-75 power grade i have been seeing in reports real, or is this just plus power playing up from a very good hit tool (or the oppsoite like gallo where the plus plus plus power helps cover a below average hit tool).

Also, What position do you see Bryant at next season, and beyond (guessing different answers, 3b short term, RF long term?)?

Unfortunately the 20-80 scale can at times be somewhat subjective – one scout’s view of a 70 tool may be another’s 65, so reducing it to a “true” number is pretty tough. That said, Bryant’s power doesn’t measure up with Gallo’s but it’s “real” and isn’t just playing up because of his superior hit tool. I always refer everyone to the much better “numbers guys” here at Razzball for the most reliable projections, but I do think Kris will be a consistent 30-35 HR bat when he arrives.

As for his position, I’d imagine that will be decided by Theo, Jed, and the strides Baez and Russell make over the rest of this season. Assuming the Cubs keep EVERYBODY, it’s awfully tough for me to see Bryant as an infielder long-term. Castro, Baez, and Russell are all superior defenders, and Baez is already seeing time at 2B. That would leave Russell and Castro as the options for the left side of the infield (with Russell arguably the better defensive SS). If Theo and Jed decide that all three should begin 2015 with the big club he’s in RF.

Almora has the higher ceiling – Winker the more likely of the two to reach his.