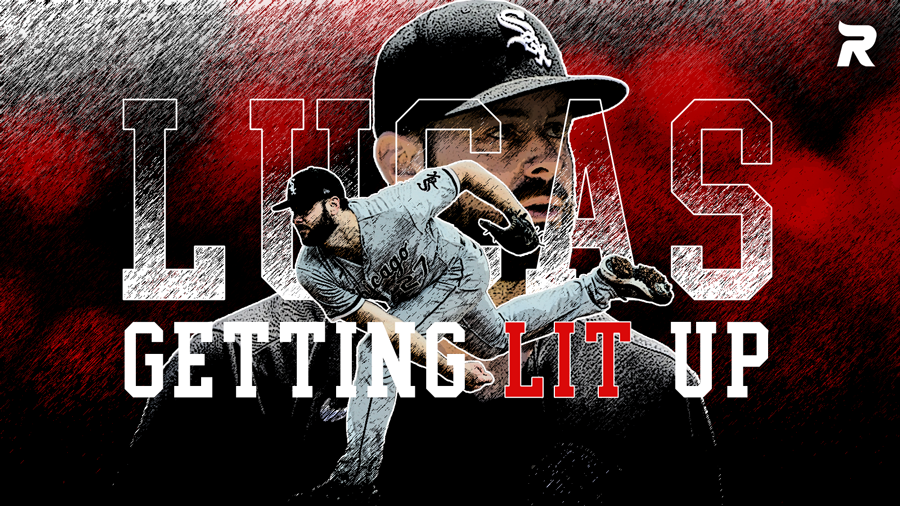 Taken as a top 20 pitcher in drafts at the beginning of the year, Lucas Giolito hasn’t really lived up to the hype we were hoping for when he was taken as top pitcher coming off some statistically promising years in 2019-2021. Giolito started the season off well this year carrying a 2.63 ERA (2.93 xFIP) through his first 7 starts despite being shelved on the IL from April 9-24 for a left abdominal strain. Then he missed a brief period in mid-May with COVID but recovered quickly only missing an additional 2 days for rest between starts. Recently though, the wheels have come off and he has been shelled for 30 runs in the last 5 starts. Ouch. “Why is Luke Lit now being lit up?” I am prompting you to ask…

First, let’s look at the macro:

So far this year his surface-level statistics look to be on par with last year. He hasn’t been quite as dominant as he was in 2019-2020, but he has still been pretty solid. The key, though, is giving up more hits and a few more walks as he did in those more dominant years but without the bounce back in K-rate. And as xERA would show, he hasn’t been all that unlucky and his FIP agrees. The disagreement comes with xFIP and SIERA which both suggest the opposite…. Luck has NOT been on his side. So maybe the defense hasn’t been as much of an asset to him recently and maybe some extra bounce in the balls, feels like there’s more. Time to go deeper.

Recently, Lucas Giolito has been taken to the woodshed by the BABIP gods. Easily far above his career norms, batters have been getting on base over 80 points higher than his 3-year trend of .265. Despite a consistent strand rate, more passing through still nets more runs. And to make matters worse, he’s fighting that off with a much elevated HR-rate of 20%, compared to another consistent line of just under 14%. This explains the “why” for his bloated ERA and WHIP but not the “how”… let’s continue.

More batters are getting on base in large part due to a 2x increase in his allowed barrel rate which leads to more hard hits with a higher exit velo and that leads to more flyballs… *breathe* …and THAT leads to more home runs. When it rains, it pours. The Lucas Giolito ship is taking on a lot of water. But the batted ball metrics don’t quite tell us the root cause. He’s getting hit harder, but why-why, that’s 2 whys deep. There seems to be more going than just bad luck if his hard-hit rate is over 10 points higher than another consistent line for his career.

His velocity. So far this season his velocity is down just under a tick on most of his pitches: 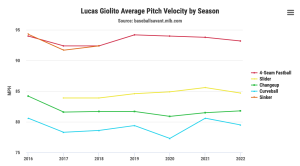 His fastball is currently down to just above 93 mph, which, since 2019 is now down a full tick when it was above 94. His slider and curveball too are all down a touch… except his changeup. His changeup has actually gone UP. Though it might not seem like a big deal, a shave here and a regression here can add up. What was a separation in his fastball-change of 12.3 mph last year, is now a difference of 11.4, one whole tick down, on top of the drop in his velocity, making it an effective drop of nearly 2 mph.

Then there’s spin rate. He got a lot of attention for spin rate last year with the crackdown; but, after the checks were implemented he still maintained a rate above 2200 and this year he’s down to 2100 range. Not a large difference, but noticeable in the data all the same. As with the rest of his under-the-hood data, there’s no clear smoking gun but several mild issues here and there that all seem to be working against him at the wrong time, creating one big problem on the stat line.

The question remains though, what’s the cause of all this? COVID? lingering side effects of his early-season injury? a kink in his mechanics? It’s hard to tell. What has happened though, along with his drop in velo, is that his fastball has also lost over 2.5 inches of horizontal movement… 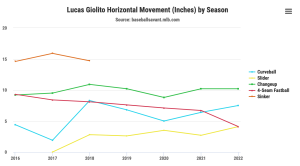 That large dip in his fastball is not good. His fastball has suddenly become a lot flatter. And if that happens, along with a drop a velo, it becomes a lot more hittable. And it shows. Compared to 2019-2020 opponent AVG vs his fastball and changeup has gone up 80+ points and nearly 100 points on his slider since just a year ago. And what’s more, he’s catching the edges of the zone less. His Zone% on pitches is down roughly 5% and below 40% for the first time in his career. This is magnified by an increase in batter Zone Contact% by roughly 5%. The sample is still rather small, but there is a feel that batters are waiting for a pitch to get in the zone and then hammering it.

What’s the takeaway? He’s due for “some” positive regression no doubt. That BABIP being north of 360 doesn’t seem to be sustainable for opposing batters. Lucas Giolito is not likely to be a 5 ERA starter and has probably earned closer to a 3.80 range. BUT, and this is a JLo-sized but, until we see his velo climb back and his fastball sees the late-life return, I think it’s unlikely that Giolito looks like an ace-level starter and more like a number 2-3. Right now, nobody is scared of his fastball/change combo so they can simply pick something to sit on and there’s not a fear that ends with chasing garbage pitches. He is still getting the Ks we want from him, but the weakness in his primary pitch is going to continue to allow more runners on the basepaths.

Great in-depth analysis. Seems like he needs to work on his mechanics a bit; tighten things up. Hopefully he’s able to do that because he is certainly scuffling right now.

Thanks! Yeah, the mechanics seem to be the biggest culprit. One thing I left out of the post due to length is the spin direction, it looks a little off from last year so it would seem he’s off the seams a bit

Is that headline a reference to Lucas With the Lid Off?!

hahaha, it was not intentionally

I clicked for the reference alone

Ha, awesome. I must have done it subconsciously