Last week I told you the story about a couple of pitchers that went goo-goo for the slider; here. They decided to trust in their best pitch and turned anger into lust. This was the topic of some discussion in Razzland this week, about how there’s a philosophical shift in the last couple of years to eliminate pitches from players’ repertoire. The main idea: stop throwing pitches that are sub-par and throw your best pitch more. ZOINKS. What a novel concept.

In the past, there was reason to diversify your pitches to be more unpredictable, and create more soft contact. But… with hitting philosophy changing, batters are more “patient” in some ways and swing for the fences on pitches/counts more often. If a weak pitch gets over the plate 30% more, guess what, it lands in the bleachers 30% more too. Thus the surge of the slider. Not only is it the hardest pitch to hit, but mechanics have also improved on it too. The pitch is nastier now on average than it ever has been. And here we are.

This week’s edition of “Who’s throwing sliders more and winning?”: Jose Suarez. The wrinkle, he didn’t throw any sliders at all last year. Shocking. After a bit of a slow start to the season (and a peppering of spot starts), he introduced more and more sliders beginning in July (May was just a bullpen appearance). I don’t think that I have to tell you, yes, the slider is his best pitch. 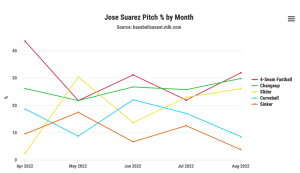 He went to his slider more and is erasing his sinker (worst pitch) and curveball. Now his primary weapons are fastball, changeup, and slider. Nice and simple. The fastball is the core pitch, changeup keeps batters honest, and the slider is enhanced by the fastball. “Why did he go back to the slider, and likewise, what is he doing differently?” I can hear you asking from your couch while you eat that slice of pepperoni pizza. I SEE YOU. Thanks for asking!

What does this fancy chart mean?! Prior to this season, Suarez’s slider was vertical, it was mostly north-south, and his changeup was rather flat. This season, Suarez has regained the drop on his changeup AND added more run (break). So now it goes away from righties. On top of that, his slider now has almost 10 MORE inches of break while maintaining its drop. It now dives away from lefties at an increased rate and has essentially become a power curve, rendering his curveball largely unnecessary. Those two pitches with his fastball now move in completely different and complementary ways.

This last night he was hitless through 5 Before wearing down in the 6th allowing 4 hits in a row and then was hung out to dry by his bullpen. We are in the midst of seeing a new pitcher evolve. Is he elite? No. Can he be effective? Yes. Over the last 2 months, batters are hitting a combined .138 off his slider/change combo. Down the stretch, he can provide very solid ratios (1.99 BB/9 since ASB) without hurting you in Ks (8.34 K/9 since ASB). With Mike Trout reportedly healthy again (fingers crossed) and Ohtani swinging a hot bat, the Angels might actually score a few runs down the stretch and net Suarez a few wins, so I’d consider rostering him if you haven’t already.

Thanks. It is good to read that his recent run of success may be something more than just facing weak opponents or luck. It is hard to find serviceable pitching in a 16 team league at this time of the year. Especially in a league that has a fairly high weekly IP minimum.

Agreed, harder to find useful waiver pitchers. I’m a little wary of Suarez against teams like Astros, but middle to bottom teams I think he can provide good results rest of the way.

Don’t know anything about Castillo, I like JP Sears so far

Been waiting for this!