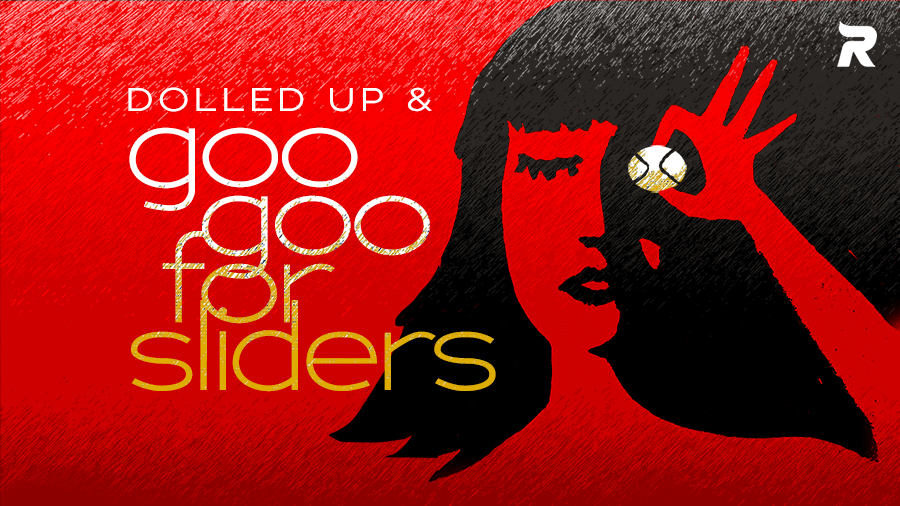 Let me whisper in your ear… Have you ever learned about something that seems so obvious now that you are amazed you didn’t think about it more before? Yeah, this is one of those times. The baseball season is so long, it might as well be 2 seasons. And often with the ebb and flow of the grind, it becomes that. Hitters go through periods of adjustments and readjustments. What worked at one point in the season doesn’t later, and vice versa. A cold hitter finally works out their kinks, finds a rhythm and then goes on a bender. You gotta break it down into halves, months, and rolling periods. This is equally true for pitchers.

Often times we can’t just look at the whole; we must look at the season in, well, seasons. Pitchers don’t always follow the same formula in August they did in say April or May. Yeah sure, some stay pretty close with a few wrinkles start to start. BUT. There are many that adjust their approach as the season goes on. And as I am finding out more and more by the day. Aside from the elite of the elite, this is the norm. Duh. Like I said in the beginning, the painfully self-evident truth. And some pitchers, like certain American bands, don’t hit it big right away and have to change their approach before finally hitting it big with a Slide piece (did you know they first started in 1986?! Can you believe it, their big album was in 1998).

Where am I going with this? The other painful truth, pitchers want to evolve. They don’t want to rely on 1 pitch, but hey, if it works they’ll go back to it. Especially when it’s the difference between winning and losing. Whew, big surprise there. Coolwhip dropping some real truth today: professional athletes care about winning, and they’ll do what gets them there. Success under the spotlight. A lot of times that success comes from the slider, even though they might not want to be (by selling out).

2018, Blake Snell won the Cy Young. He did so that year with a 97 mph fastball and a power curve and nasty change-up. The slider? Not really a featured pitch of his at the time. Yeah, he threw one, but it wasn’t a focal point and was his least used pitch. Ever since then, between injuries he’s been chasing that success. Then, in the second half of last year, he did something. Blake realized that his changeup wasn’t that great anymore (shocker) and batters were able to hit it. His best pitch, the slider, actually deserved a feature role. Ever since that 2018 season, it was the best.

Towards the end of the season last year I wrote about him, here. The main thing there was “Blake Snell was incorporating more fastballs into his pitch mix and finding the combinations that worked. Fastball usage increased and now has settled up around 60% at the expense of his changeup. It started around 20% this season, and now he has all but erased it. Also filling the void is his slider up to average around 30%. He has simplified his approach. He’s gone the Robbie Ray route (minus the tight pants) where less is more. By doing so, it’s helped him reign in his command.” And that’s me quoting me the way that Grey quotes himself! 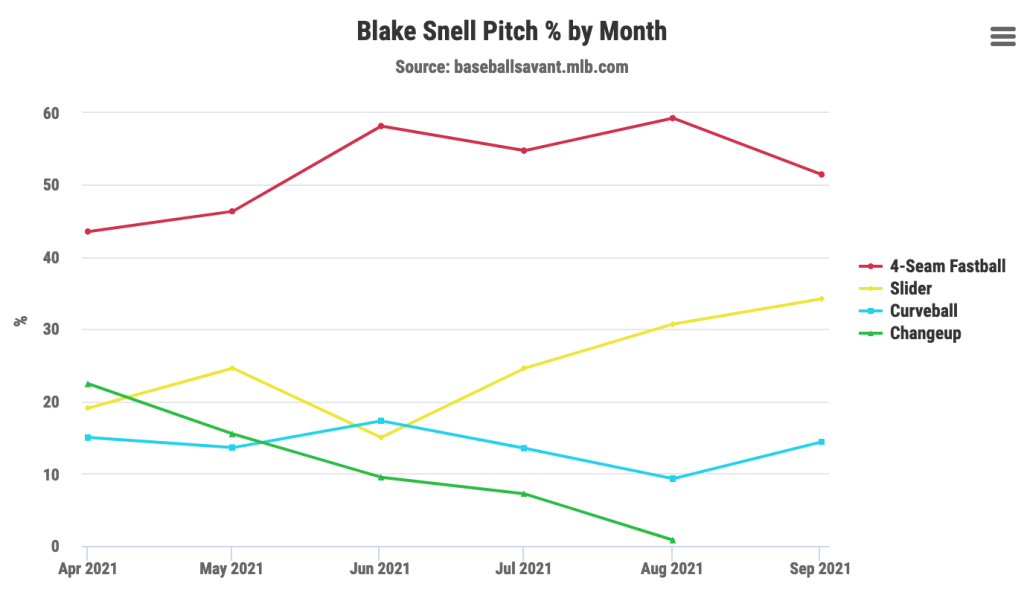 Blake Snell in the second half of 2021, “I should throw my change-up less and the slider more since no one can hit it. And to make it more effective, I should pump the heat more so you can’t sit on it.” Go with what works for you. Snell figured that out as the season went on, and this new look, Robbie Ray-style Snell was more effect focusing on the fastball-slider combo the most. Fast-forward to 2022: 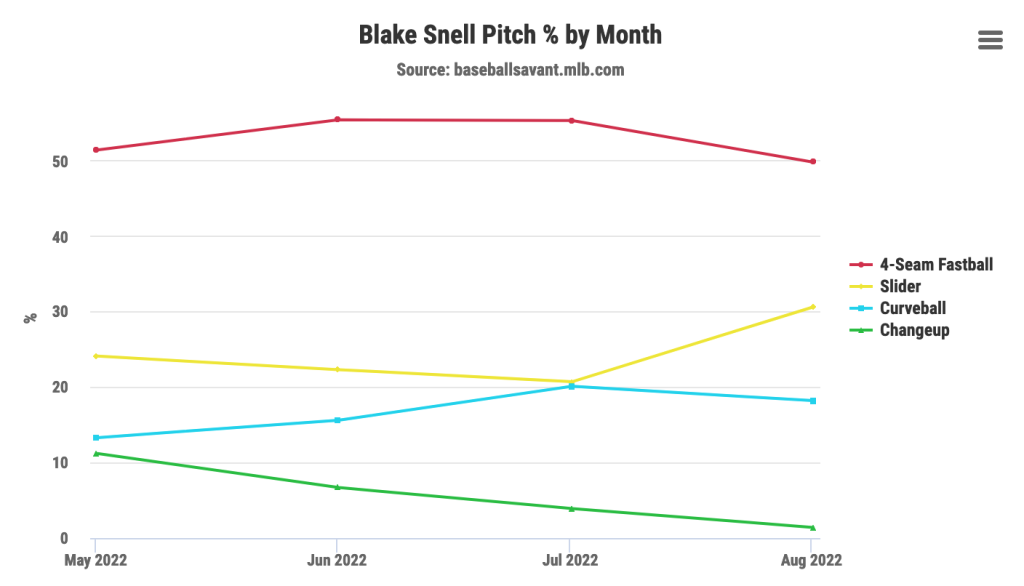 Blake Snell in the second half of 2022, “I should throw my change-up less and the slider more…” *record scratch* It’s the same thing! Pam from the Office smirks and says “they are the same picture.” Maybe he wasn’t confident in his rehab yet, maybe he forgot his training? I don’t know. But for some reason, he reverted back and now he reverted back to where he was after the first back. Pitch mix that didn’t work, change, revert, re-do change. We’re back to the good version of Blake Snell, and as long as he continues this is the Snell you want to have. And It all comes from the slider. Now I could stop here and send you on your way with a bag of goldfish… but I have more.

Last year, Justin started out of the bullpen and featured, guess what, his slider. He got a lot of swings and misses and was pretty effective. Then in the second half, he made the move to starting and his usage of the slider dropped off from a high of 33% in May down to 8% in September. The slider was replaced with a more diversified approach that included a lot more of the sinker. Only, the sinker wasn’t very good and was in fact his worst pitch. When you replace your best pitch with your worst pitch, things don’t go too well. 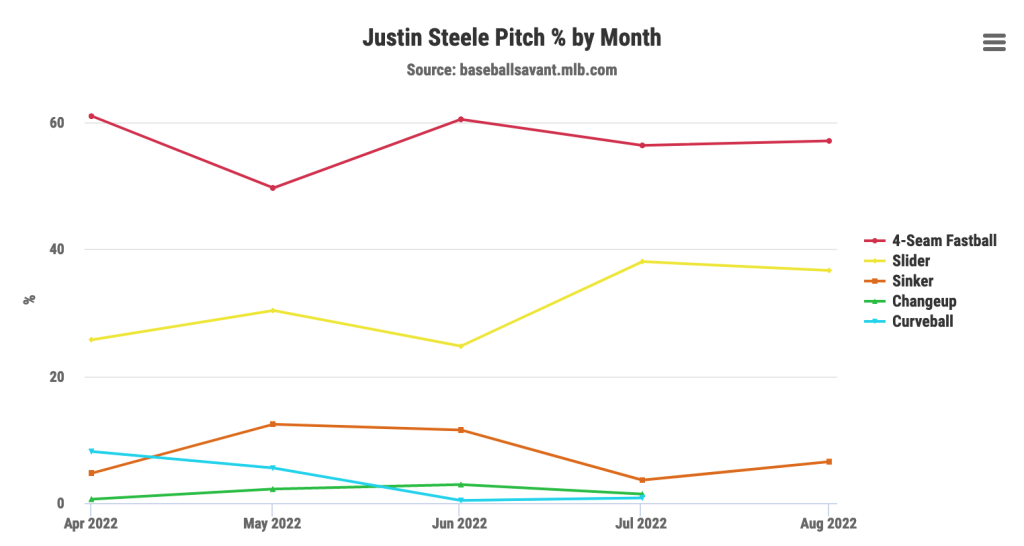 Welcome to 2022. Where have we seen this before? In the second half of this season, Justin has nearly scrapped his secondary pitches, save the slider. The sinker is still used sparingly, but it’s mostly a change of pace now for his fastball which is primarily combo’d with the, you guessed it, slider. In July, he used the slider at an all-time high of 38%. On the year, batters are hitting a paltry .129 against his slider. And I’m sure you’re asking me, why does it work?

He doesn’t have quite the velocity that Snell does, but does share a few things. His fastball has a lot of spin (both are in the top 9% of the league) and it’s mostly flat and straight. Only in Justin’s case, it’s really really straight. A bullet shot from a rifle straight. Yes, that’s only 1.3 inches of horizontal break, seven times less than the league average. Well, how do you protect that? Pair it with a pitch that gets a lot of horizontal movement, namely a slider.

Steele’s slider has two and half times of horizontal movement than the league average slider and a positive drop as well. It moves a ton compared to a fastball that doesn’t move at all. But because they both have high spin rates it makes them harder to pick up, and harder to hit. Complimentary pitches at the extremes make him difficult to square up as evidenced by his top 7% of missed barrel rate. Over the last month, Justin Steele has thrown 19.1 IP with a 1.86 ERA and 9.78 K/9, and then just last night went 6 IP, 2 ER, 9 Ks against Washington.

Is Steele the next Ray/Snell? Probably not due to his velocity. But, the effectiveness of his slider means he doesn’t need to be. And especially in favorable matchups, it’s like taking candy from a baby, and everyone’s watching while eating overpriced hotdogs.

And then there’s Jose Suarez… But we’ll save that for another day. :)