The MLB trade deadline is fast approaching and that should be a cue in our little fantasy game to predict landing spots and proactively poach talent while planning for potential opportunities.  Maybe it will be a middle reliever taking over the closer spot or a young prospect getting a shot at the big leagues in a newly vacated role.  Regardless of the reason, late July and early August should be some of the most active times in any league.  This week we will review a few hitter profiles for some of the bigger names that can and should provide more value in the final two months of the season than folks may realize.  A dive into Jose Ramirez, Trevor Story, and the ageless Evan Longoria shall follow!

Typically, when a player has 19 long balls and 10 steals just over halfway through the season it should be a big deal.  However, Ramirez’s line through nearly 90 games in 2021 is not too different from his nearly 60 game output across 2020.  Combine the ‘slower’ start in 2021 with a disappointing .256 batting average and folks may be sleeping a bit on Ramirez as we close in on the final two months of the season.  While others sleep, let the following Savant graphic drive you crazy: 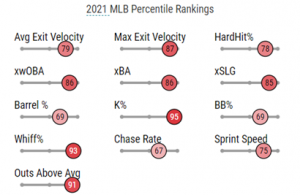 Have you seen more beauty?  Ramirez is sporting an xBA of .279, a career-best exit velocity, and walk rates in the top 5 percent of the league.  Finishing up a 40/20 season and sporting a .280 – .300 batting average over the last few months is certainly within reach.

Story has been a bit of a disappointment for fantasy owners in 2021.  After three straight seasons of all-star output, Story has regressed with a career-low hard-hit rate, an average below .250, and barely double-digit power in Coors Field.  So why does he make an article about big things?  With trade rumors abound, Story is very likely on the move.  While often impossible to predict, one of the most likely destinations is the Bronx. 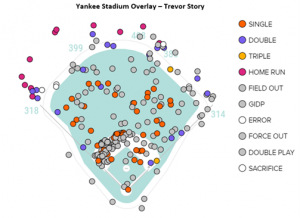 While not only has Trevor been unlucky with his power this season (xHR 19.5), but a move to New York would be an even bigger boost for the right-handed hitting shortstop.  Playing all of his games in Yankee Stadium would have output 27 homers for Story to pair with his increased stolen base proclivity this year.

Dropping into the bargain bin finds us Evan Longoria and his big-name from his days in Tampa Bay.  However, much of that shine has worn off as seasons have gone by.  Now 35 years old, Longoria is having a resurgence in San Francisco that does not get enough attention.  A few key figures:

While Longoria will likely not have the same level of ultimate impact as the other two players discussed today, he might be on your waiver wire as he returns from his injured list stay.