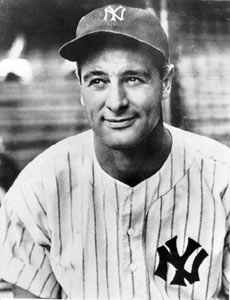 After the 1938 season, Yankee pitcher Wes Ferrell, who played golf with Gehrig on a regular basis, noticed that Lou refrained from wearing golf cleats; instead he wore sneakers, and was sliding his feet along the ground.  He became frightened that something was wrong, and notified Yankee skipper Joe McCarthy. Gehrig played the first 8 games of the 1939 season, but it was apparent that he was not the same player as before. When Gehrig made a routine play with more then a small bit of difficulty, several Yankees, including Bill Dickey and Joe Gordon, patted him on the back, complimenting him on his effort.  It was at that point that Gehrig knew the gig was up, and feeling utterly humiliated, took himself out of the game.

The next day, for the first time in 2,130 games, Lou Gehrig’s name was not listed on the Yankee scorecard. Innumerable injuries (X-Rays showed 17 separate fractures on Gehrig’s hands), an uncountable number of concussions,  lumbago and exhaustion could not keep the Iron Horse out of the lineup, but devastation at the inexplicable sudden loss of his skills led this humble man to admit what seemed to be the obvious; that he was past his prime.  A short time later, he found out that there was a much more calamitous explanation. In less then one month, the Mayo Clinic confirmed that he suffered from amyotrophic lateral sclerosis. A little over one month after that, on July 4th, 1939, Gehrig was honored by over 60,000 tearful fans, as well as a cast of former colleagues, and managers, from the legendary Murderer’s Row squad of ’27, to his present day teammates, at Lou Gehrig Appreciation Day at Yankee Stadium. One certainly doesn’t have to be a baseball fan to have seen the memorable portrayal of Gary Cooper, in “Pride of the Yankees”, stating “Today, I consider myself the luckiest man on the face of the earth” * Realizing the gravity of Gehrig’s illness, the Iron Horse was voted into the Baseball Hall of Fame in December of 1939 by a special election. In June of 1942, only slightly more then two years since his initial diagnosis, Gehrig had died from the ravages of that horrific illness.

It is a curious fact that Gehrig is best known for his consecutive streak and the manner of his death; what often seems lost in the equation is that he was one of the greatest ballplayers, not just of his era, but of all time. His lifetime RBI total of 1,990 is 5th all time, and his 184 RBI’s in a single season continues to be an American League Record after over 70 seasons. He continues to have the all time record of 23 grand slam homeruns; he had 13 consecutive seasons with 100 RBI and 100 RS, had 200 hits and 100 walks in the same season on seven occasions, won 2 MVP Awards, Hit for the Triple Crown (1934), batted over .300 for 12 consecutive seasons, averaged over 150 RBI’s over an 11 year stretch, and had a life-time .632 Slugging Percentage. He was the first batter in the 20th century to hit four home runs in one game. Gehrig also was a terrific clutch hitter; he played in seven World Series, in which he had a cumulative BA of .361, with 10 home runs and 35 RBI’s and a .731 Slugging Percentage.

Despite his brilliance, Gehrig has been described by many sportswriters as always seeming to be destined to play in the shadows of other roundball legends of yore. For years, he played in the shadow of the Sultan of Swat, the greatest player in the history of the sport. After the Babe retired, he again seemed to perform in the shadow of the new Yankee phenom, Joe DiMaggio. Even on the day he performed his greatest hitting feat of his career, when he tagged four homeruns in one game, his effort was overshadowed by the sudden retirement of Manager John McGraw. Unfortunately, it took the terrible tragedy of his illness, and the dignity in which he handled this, to bring Lou Gehrig into the spotlight, where he had deserved to be his entire career, as a result of his prodigious exploits.

“He’s one of the greatest of all time, streak or no streak.  He had like five seasons of over 170 RBIs. ** That’s ridiculous. He averaged almost an RBI a game, that’s absurd. You think of the streak when you think of him, but I think he’s one of the best ever, streak or no streak. I think he’s more famous for the streak than he should be. He was that good. It’s a monumental feat. But to put up the numbers he did injured on more than one occasion is remarkable.” – Jeff Conine, Baltimore Orioles.

But the story doesn’t stop here. In itself, the life of Lou Gehrig is perhaps the most memorable epic heroic tragedies in sports history. But there is a mysterious anecdote once told by the immortal Red Smith, which, if you are attracted to the numinous, may cause a few chills to run down your spine…

The Saga of the Lou Gehrig Medallion

After the 1933 season, Major League Baseball assembled an all-star team, which went on a barnstorming tour to Japan. The Japanese, perhaps more than any other nation not located in the Caribbean, became enamored with the game that Abner Doubleday didn’t invent.

It should be noted that his trip is primarily remembered by baseball historians as the origin of the regrettable Ruth-Gehrig feud. The bitter dispute was, of course, initiated by the intruding  mother-in-laws – there were some words spoken by Gehrig’s mom concerning the Babe’s foster daughter, which precipitated a bitter dispute which did not subside until the day that Lou officially retired. The two legends occupied the same dugout and locker room for many years, never saying a word to each other, but when Gehrig told the world about his devastating illness, the Babe put his arm around him, spoke some touching words, and the two one-time close friends were finally united due to the tragedy.  Ruth and Gehrig were huge celebrities in Japan at the time, as well as the rest of the players; Tokyo reacted to their presence in a similar manner to America reacting thirty years later to the Beatles, harbingers of the British Invasion. In the midst of the baseball extravaganza, the team attended a banquet in the Japanese Imperial Palace, and on that occasion Gehrig was presente with a gold medal by a high functionary of Emperor Hirohito.

Now flash forward to December 7th, 1941, the day Franklin Delano Roosevelt said would forever live in infamy. Gehrig had passed away from Amyotrophic lateral sclerosis, henceforth forever known as Lou Gehrig’s disease, on June 2nd, 1941. Soon after the hideous attack, the Department of War received a package  – it can only be assumed that it was from the Gehrig family – which contained the gold medal that Gehrig had received at the behest of the Japanese Empire, along with a request that the medal be returned to the government in Tokyo along with the first consignment of American bombs aimed at the Land of the Rising Son. Famous War hero Jimmy Doolitlle was given that unique honor, leading 15 other crews while flying a Mitchell B-28 bomber in May 1941. That in itself would be an interesting story, but at that point, the medal entered a realm of the preternatural that is impervious to logic or reason.

Quite a while afterwards, a Japanese sub attacked an American Liberty ship in the Pacific. The Liberty vessel was caught unawares, and seemed doomed to perdition. Or so the Japanese thought. But the ship was guided by a brave and plucky Captain who rammed the sub and sunk the vessel. Several Japanese seamen survived. One of the survivors was found with a strange talisman; after some investigation, it was found to be the Lou Gehrig Medallion!

The name of this brand new Liberty vessel that prevailed in what seemed to be a hopeless battle – the S.S. Lou Gehrig.

“There is a fifth dimension beyond that which is known to man. It is a dimension as vast as space and as timeless as infinity. It is the middle ground between light and shadow, between science and superstition, and it lies between the pit of man’s fears and the summit of his knowledge.”

* that quote was voted #38 in the American Film Institute (AFI) list of the “100 greatest movie quotes of all time.”