The Fantasy Baseball Hall of Fame in conjunction with Razzball.com, are electing the All-Star teams of the Fantasy Era. For every season from 1980 to today full 23 man rosters will be created and analyzed. In the second installment the 1995 through 1997 seasons are identified.

1995 was the calm before the storm. This team was ranked 14th overall and the All-Stars would soon head into a stretch of four consecutive Top 10 teams, finishing with the best three of all time.

With the exception of relief pitching, all other positions were ranked between 8th and 16th making the team about average in total. For every Mike Piazza (12.6 FBHOF points) there seemed to be a Mike Stanley (5.9 FBHOF points) to counterbalance the team more towards mediocrity. Greg Maddux had an incredible year (17 FBHOF Points, 19 W, 0.81 WHIP, 1.63 ERA) but his All-Star teammate David Cone managed just 9.2 FBHOF points.

One important aspect of 1995 stands out though. Not only was Maddux great, but for the first time in the fantasy era there were two 16 point pitchers in the same year. Joining Maddux is #2 starter Randy Johnson who tossed 214 innings with a 1.05 WHIP and 2.48 ERA, winning 18 and striking out 294.

On offense, Albert Belle and Dante Bichette led the way with 15+ FBHOF point seasons and hitting 90 HR and 254 RBI combined. 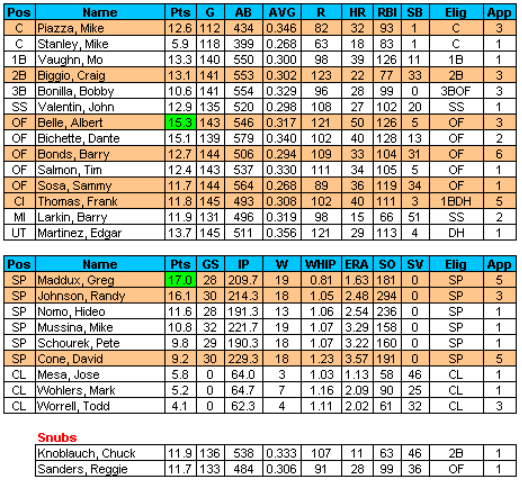 Due to the strength of their potent offense, the 1996 All Stars rank 7th overall. The infield was very good (7th) with only the 2nd catcher Ivan Rodriguez failing to score 10 FBHOF points. First Basemen Andres Galarraga hit 47 HR and drove in 150; Second Basemen Chuck Knoblauch batted .341 with 140 R; Third Basemen Ken Caminiti hit 40 HR; and future FBHOF’er Alex Rodriguez made his first All-Star appearance batting .358 with 141 R, 36 HR, 123 RBI, and 15 SB as the starting shortstop. Other FBHOF’ers making their first all star appearances were Chipper Jones, John Smoltz, and Kevin Brown. 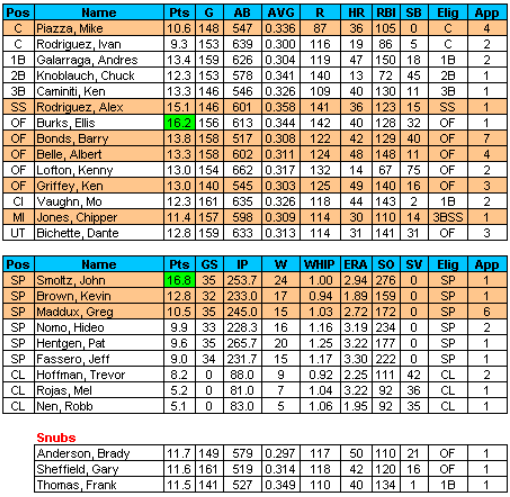 Never in the history of fantasy baseball has such a collection of talent been assembled. This team has it all:

The only missing attribute was a preeminent base stealer, though six players did have 25 or more, capped off by Biggio’s 47.

This team was also second to none in terms of elite seasons. A record five players recorded FBHOF scores of 15 or better:

The crown jewel of the ’97 All Stars is Walker, who amassed more FBHOF points in a single season than any other batter in fantasy history. Walker was good enough to lead the league in On Base percentage, Slugging Percentage, OPS, Total Bases, Home Runs, Runs Created, Extra Base Hits and several other Sabermetric minded stats like Offensive Winning Percentage and Adjusted Batting Runs. He was also Top-Three in Runs, Hits, Doubles, and RBI. It was an all around masterful season and I for one can’t wait to see how it stacks up against the greats of earlier decades (hint hint about future FBHOF developments). 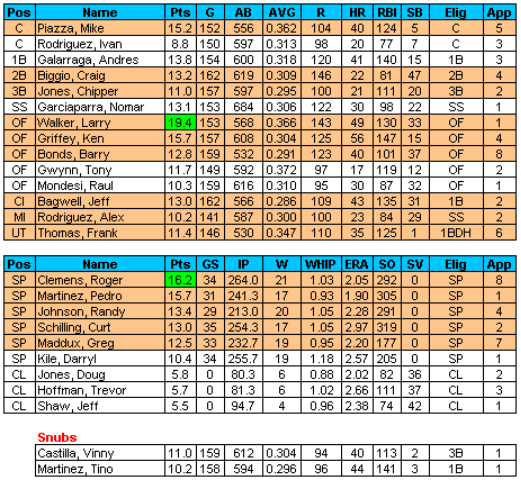