This is my fourth post for baseball this season. Scrolling through the NFBC ADP data, a common theme has surfaced, which is that older players who had a down year due to injury are being left for dead. As Grey so eloquently commented in my Daniel Murphy post, “Eff the olds.” That is the natural state of drafts for most seasons. The allure of the unknown or success in the most recent season usually elevates the cost of acquisition. On the flip side, a down year has many players being tossed into the trash. Those are the players that most intrigue me because the overreaction to the downside is usually so severe that much value is available to be mined. Which brings me to David Peralta of the Arizona Diamondbacks. In 2018, he had a triple slash of .293/.352/.516 and clubbed 30 home runs. As a result, his ADP entering the 2019 season was 115.9. Then he proceeded to hit .275/.343/.461 with 12 home runs in 2019. Now, he’s being drafted as the 258th overall player. This David is no king, but could he provide salvation?

Before I dig into the nitty gritty, context is important. How is your team constructed? What are your needs in the latter stages of the draft? Do you need floor or want upside? Keep all of that in mind when you read any fantasy analysis article. With that said, let’s dig in.

The first thing that needs to be addressed is the litany of injuries that Peralta suffered last season. A trapezius injury in May, then a shoulder injury which put him on two separate 10-day IL stints, a neck injury in August, then finally a shoulder injury which ended his season. He played in only 99 games and accrued 423 plate appearances. The prior two seasons, he played 146 and 140 games and went to the plate 614 and 577 times respectively.

I want to drop the mic now, but let’s see if we can understand exactly what happened.

He walked more and struck out less. That’s good. The BABIP plummeted from .392 to .273, so that explains some of the drop in average. We know the power dissipated, so the drop in SLG from .544 to .385 isn’t surprising.

Looking at the batted ball data, the increase in the infield-flyball rate, increase in soft hit rate, and decrease in hard hit rate intrigue me. The IFFB% went from 5.6% all the way up to 15.2%. Why?

Looking at the pitch type data, there wasn’t a huge difference in the percentage of pitches thrown. For example, pre-injury, Peralta was seeing fastballs 50.7% of the time. After the initial injury, the fastball rate was 52%. But, but, but…..the success against the fastball was drastically different between the two periods. Pre-injury, Peralta was crushing the fastball. According to Fangraphs, he had a 6.4 value against the pitch. After the initial injury, he was a -4.8 against it.

I then looked at the heat maps for fastball location on Brooksbaseball. Here’s pre-injury: 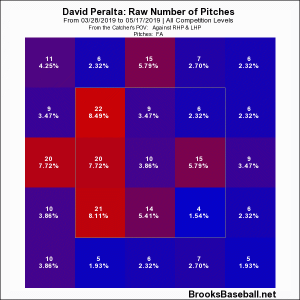 And now after the initial injury: 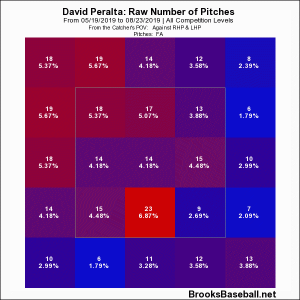 Just peppering him with high and away stuff. Now that IFFB% spike makes a ton of sense. Pitchers weren’t worried about him driving the ball out to left field and realized that he was having difficulty generating power to catch up to high-and-away heat. I don’t want to go crazy with posting heat maps in this post, so I will just explain the SLG one to you. Pre-injury, Peralta showed good power when being pitched on the outer third of the plate. After the initial injury, niet!