It’s a relatively rare feat to witness a player finish in the top-two overall on the Razzball player rater as well as in NL MVP voting two consecutive seasons, then follow up such elite fantasy production with a 99th percentile exit velocity, 98th percentile hard hit rate and 88th percentile xwOBA in the third year to follow. That’s two years of high-end, top-two fantasy production followed by sexy batted ball metrics in the third year. What’s even rarer is to see a player with that exact profile currently possessing an ADP of 12th overall in drafts entering the 2021 season. Impossible, you say? Well, so is the story of Christian Yelich. And although we all know those batted ball metrics don’t tell the full story of Yelich’s 2020, we can at least all agree that his current ADP is straight-up bonkers, right? Especially when considering that Yelich’s two consecutive seasons in the top two on the Razzball player rater (2018, 2019) represented full seasons, while his disastrous 2020 campaign came in an abbreviated 60-game slate. What is this madness — and how can you capitalize on it as a fantasy owner this upcoming season?

Dumb question. The answer is simple: you draft him. But where, you ask? Well, if he’s there at pick 12, you’d be a fool not to take him. However, in saying this, I am by no means telling our dear readers to throw Grey’s rankings out the window. A) You’d likely all listen to Grey over me even if I tried. B) This information is simply to supplement said rankings and be used in lockstep for draft strategy. C) There’s no C. I wrote a C, but Grey deleted it because of my dashing good looks.

In short, your draft strategy is ultimately up to you. Obviously, if you’re playing with a smart crowd, Yelich isn’t going to be there at pick 12. But if I’m at pick six (flashback to my glory days on the elementary school playground) and Acuna, Betts, Tatis Jr., Soto and Trout have all been taken, I’m taking Yelich — judge how you may. But that’s not to say, for example, that Trea Turner or Trevor Story wouldn’t be excellent picks there as well — picks that you would make in that spot if you were to follow Grey’s rankings to a tee. I have no problem with picking those guys in that spot. You can definitely build a championship roster by doing so. However, I expect Yelich to return similar numbers in 2021 to what we experienced from 2018-19, which in turn would mean he would provide more fantasy value than either of those two names. I do not anticipate him replicating said production, but I do believe he’ll come within 90% or more of that ceiling — and I’m here to tell you why I both believe he can accomplish such a feat while explaining why his return to achieving 100% or more of his previous output is unlikely to happen.

Let’s begin at the most logical starting point: in my Uncle Jimbo’s mushroom trip basement. It comes fully equipped with padded walls, every Pink Floyd album on vinyl, Icebreaker Sours and a full sabermetric database. Shocking, I know. Great place though, especially if you’re looking to compare Yelich from 2018-19 vs. his 2020. Over 277 games/1,231 plate appearances from 2018-19, Yelich slashed .327/.415/.631 with a 171 OPS+. His 162-game averages were that of 40 home runs, 104 RBI, 109 runs and 26 stolen bases. That’s the profile of a player we’re heavily considering at No. 1 overall in fantasy drafts, pretty much regardless of format. And considering he was just 28 years of age entering the 2021 season, we had no reason to value him as anything other than a top-three fantasy pick in the game in 2020, and perhaps for the long-term over the next three years to come as well.

The easy answer and the reason I’m writing this piece, is that I truly don’t have answer. Yes, Yelich’s strikeout rate jumped up 10.5%, nestling in at 30.8% for the 2021 season. But his walk rate also rose 4.8% up to 18.6%. That allowed Yelich to sport the second-best BB/K ratio of his career at 0.61, trailing only his mark of 0.68 in 2019. You heard that correctly: Yelich’s 0.61 BB/K ratio in 2020 was better than the 0.50 BB/K mark he produced en route to running away with the NL MVP in 2018. Remember, Yelich broke into the MLB in 2013 as a hit-first prospect that many analysts had capped at around a 20-homer ceiling. This is not a bat that sells out for power. Yelich is a player who understands the strike zone, historically commands and defends his zone as well as any hitter in the game and hits selectively to all fields. Long story short: I expect the strikeout numbers to regress back closely to Yelich’s career mean over a full season in 2021.

That being said, it probably isn’t realistic to expect Yelich’s strikeout rate to ever settle back in between 20-21%, as it was from 2018-19. The reason has less to do with the numbers and more to do with understanding how the game of baseball works. When a player is in a strong lineup surrounded by offensive weapons, that player is likely to see more pitches in the strike zone that he can drive. When a player is the primary threat in a lineup with little protection, that same player may only see one-to-two pitches to drive per game, if that. And I say “pitches to drive” as opposed to simply strikes — because there is a clear and obvious difference between the two. Here is one example of some of the names that were surrounding Yelich in the Brewers lineup last season:

Mark DeRosa gave a very in-depth mechanical breakdown on MLB Network today as to why Yelich is struggling.

That is straight ugly. And when you take into account that Keston Hiura, perhaps the best option to protect Yelich both in 2020 and looking ahead to 2021, slashed .212/.297/.410 last year, the picture only gets bleaker.

Surprisingly, Yelich actually chased fewer pitches in 2020 (17.6%) than he did in 2019 (27.9%). As a matter of fact, Yelich’s 17.6% chase rate was a career best. The problem was that his chase contact % dropped from 50.4% to 38.4%, while his zone swing % fell from 69.6% to 58.1%. This tells me that Yelich saw an increase in strikes outside of the middle thirds of the plate in 2020 and that the pitches he did chase out of the strike zone last season were more of waste pitches down and out of the zone than fringe pitches. Even if he wasn’t chasing, Yelich was seeing a lot of unhittable junk, which is also why his walk rate peaked. Overall, Yelich saw his whiff % increase by 5.4% to 33.6%, and he swung at 14.3% fewer meatballs. Below, you can see a complete breakdown of his 2020 plate discipline profile by zone, which reinforces some (although not all) of the analysis I just made. 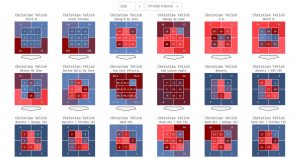 The most perplexing component in Yelich’s plate discipline profile from 2020 is looking at what types of pitches caused the most problems. Yelich whiff % on breaking balls was 47.1% in 2020 and 46.4% in 2019. Not much of a difference. As for offspeed pitches, he whiffed on 38.1% in 2020 after whiffing on 41.0% in 2019. An improvement. It was, in fact, the fastballs that Yelich struggled with, posting a 25.2% whiff rate — up 8.8% from his 16.4% mark in 2019. Was this the sign of a hitter sitting on too many breaking/offspeed pitches, trying to drive non-fastballs even in hitter’s counts? It could very well be, especially if you refer back to the plate discipline charts above.

Overall, I think Yelich’s struggles in 2020 were a combination of all the aforementioned factors and then some. With little protection in the Milwaukee lineup following the departures of Mike Moustakas and Yasmani Grandal, as well as the poor offensive output by Hiura, Yelich was put in a position to fail as a hitter last season. As a result, he lost much of his steady approach as a hitter, sitting on pitches that never materialized and taking fastballs down the heart of the plate (meatball swing % down 14.3%) as well. Still, the balls he did put in play were as well struck as ever, as evidenced by his aforementioned 99th percentile in exit velocity and 98th percentile in hard hit rate.

On top of that, Yelich’s 2020 BABIP (.259) was down .114 points from his 2018 MVP season and down .96 points from 2019. He’s not a speed demon, but he hits the ball incredibly hard and can move, so that BABIP certainly represents some bad luck. All of these are reasons for optimism to expect Yelich to return to being a top ten, if not top-five overall player in 2021.

Except for one thing. The Brewers’ lineup still sucks and the most likely opportunity for better protection in 2021 will be a return to form (or at least significant improvement) from Hiura.

As arguably Yelich’s biggest supporter in industry fantasy circles as it relates to the 2021 season, this is the primary reason I say a full return to the Yelich of 2018-19 is unlikely. However, I believe there is enough statistical evidence and track record to lead us to believe that this is still a potential top-five fantasy player in the game. If Yelich can stay healthy for the bulk of 2021, he’s as safe of a bet as any to outperform his ADP. And with the month of March now upon us, I have the itch to yell, “Yelich!” every single time I enter a draft room.

That’s all for this week! As always, I’m happy to take this conversation into the comments section or on Twitter, where you can find me @WorldOfHobbs.