When Puig made his debut for the Doyers in 2003, I thought he was going to be a bonafide superstar. Bo Jackson Part Deux. Unfortunately, he wasn’t able to make that leap. Puig’s a solid player, don’t get me wrong, but Bo clubbed 32 home runs and stole 26 bases in 1989.

Anyways, I soured a bit on Puig as the years went by. He always seemed to chase the slider away and wasn’t a maven on the base paths. In addition, he was often relegated to the bottom of the batting order. With that said, Puig has missed numerous games this year, yet he has 21 home runs and 15 stolen bases in 407 plate appearances.

I always viewed Puig as a hacker, as the swinging strike rate was 17% his rookie year and the chase rate was 37.6%. Even so, the strikeout rate was only 22.5% that season. To Puig’s credit, he has improved his plate discipline over the years. The swinging strike rate now stands at 10.4% while the chase rate is 30.7%. The line drive rate and hard hit rate are both at a career-highs of 21% and 38% respectively.

Now, I obviously want to fade Puig here because the average will come down and the .633 ISO is absurd. The 14.3%/11.4% walk-to-strikeout ratio is also way against Puig’s career norms. Here’s the thing, though. Puig is a streaky hitter and when he gets hot, he goes straight Nelly. In his six-year major league career, Puig has three months with 5 homers, three months with 6 homers, one month with 7 homers, and one month with 8 homers. That 8 homer month was in May of 2014. Puig had a slash of .398/./492/.731, 13.3% walk rate, 18.8% strikeout rate, and .333 ISO. So, it’s within the range of outcomes that this Puigy can continue flying high.

Unfortunately, the main weakness of Puig may come to the forefront this last two weeks of the season. For some reason, Puig hits RHP much better than LHP. The numbers are stark: .284 wOBA against lefties vs .388 against righties. The ISO is .168 vs .261. This is relevant because the Doyers end the season against the Rockies, Padres, Diamondbacks, and Giants. As it stands now, the Doyers are slated to face 6 lefties: Lucchesi, Freeland, Ray, Bumgarner, Suarez, and Holland. Now, add in the fact that Puig still hits toward the bottom of the lineup, could sit other days because the team is stacked, and is likely bound for regression anyways and I gotta fade him. Maybe it’s fitting that Puig has been called ManBearPuig in the past. 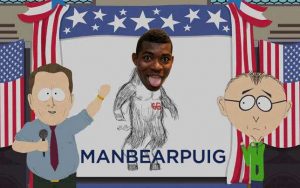