I grew up playing 720 Degrees by Atari. If any of you are unfamiliar with the game, you skate around, collect money for doing tricks, and try to earn enough tickets to enter a skate park. The best part of the game was when the timer would run out when you weren’t in an event, and a swarm of bees would chase you down while a narrator would narrate, “SKATE OR DIE!!” in a menacing narrator voice. Fast forward to 2019, and skate or die has been replaced with ride or die with scooters. I have to admit. Riding the electric scooter is fun, and in a city like Los Angeles, it’s very useful. Side sociological observation: While they are prevalent in most places, drive to the hood and you won’t find too many. Hmmmm. Anyways, besides the “shit they leave behind,” as Grey so eloquently described them in his Top 20 2nd Basemen, the electric scooters have become very dangerous. There have been hundreds of injuries and even three fatalaties. Yikes. But this is a fantasy website, so I’m going to talk about a different scooter, as in Scooter Gennett. Do we ride or die with him in 2019?

Hmmm, why no love for Scooter? Are people so fed up with scooters in general that the hate is permeating to all things scooter? Let’s dig into the numbers.

First things first, Scooter is not going to contribute many steals. He provided 4 last season, but has not reached the 10 mark in any seasons while playing in the majors. The most he had was 8 back in 2016. The lack of stolen bases is an obvious negative for his overall value.

The number that stands out is the .310 batting average. Over the last three years, the batting average has gone from .263 to .295 to last year’s .310. The BABIP has correspondingly gone from .315 to .339 to .358. Sure, there’s been some luck, but he’s also increased the line drive rate in each of the past three seasons, decreased the soft contact percentage while increasing the hard contact percentage. The barrel percentage has gone from 3.9% to 6.9% to 6%. Can we project another .310 season? Well, only 16 players hit .300 or above last season, so that may be tough. The projection systems are all over the map, as the range is .262 to .292. With that said, Scooter is a career .289 batter and I believe enough in his hit tool that the upper range of the projections is reasonable.

What about the power?

Roster Resource has Gennett hitting fourth in the lineup, behind Jesse Winker, Jose Peraza, and Joey Votto. Winker is projected to have an OBP of .397, while Votto is at .431. There should be plenty of guys on base ahead of him. Last season when batting cleanup, Scooter had a .322 average, hit 14 homers, and drove in 55. Behind Scooter is Eugenio Suarez, Scott Schebler/Matt Kemp, and Yasiel Puig. All four have 20+ home run power. The counting stats should be plentiful.

Scooter has always had good control of the strike zone. The walk rate of 6.7% isn’t great, but at least it’s not a miniscule Dee Gordon-esque 1.5%. The strikeout rate was 19.6% last season. The prior seasons, that number was 21% and 22.9%. The swinging strike rate has been above 10% only once in his seven-year career. The thing that gets me most excited is the increased contact rates, coupled with elevated aggression. He’s swinging more while making better contact. With the increase in barrel percentage and launch angle, I’ve got the need to run out and find the first Bird scooter and ride around the city naked.

I wrote up Eugenio Suarez last month, so I’m obviously high on the Reds offense this year. Average, runs, RBI, and homers should be there for Scooter. He hits both lefties (.294) and righties (.317) well, and is just as good on the road (.319) than at home (.299). It looks like the cost should be more than affordable as well. 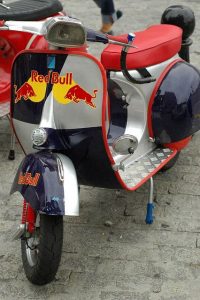 I Traded Gennet and Piscotty for Stanton Stanton. Was that wise? 12 team Dynasty.

In my 12 team dynasty league with 12 keepers I’ve been offered Josh Donaldson and a 13th and 16th rounder for Anthony Rendon. What do you think of that offer? Is Donaldson going to rebound this year in that Atlanta lineup?

@Micah Vansciver: There’s upside with Donaldson, but I’m not a believer. I’d rather have Rendon