A long time ago, in a galaxy far away, homo sapiens would nuke aluminum trays of food (which I always imagined what prison food would look like) in a microwave. I was indoctrinated into this ritual when my mom brought home what they called “tv dinners” from Swanson. It looked like crap, to be honest. To make matters worse, I had to slice a hole in the film covering the meat, then poke holes for the potatoes, then cut out the section over the cranberries. Damn B! What’s up with all the fuss for something that looks like crap? The same can be said for Dansby Swanson of the Atlanta Braves. He was much hyped, yet kind of crappy since he joined the big club. So far in 2019, though, he’s the overall number 28 player on the Razzball Player Rater! Damn B! Dansby! Let’s see if he’s a bear or a bull.

The Colorado Rockies drafted Swanson in the 38th round of the 2012 MLB Draft out of high school, so the talent has been apparent for quite some time. Swanson did not join the professional ranks, though, but decided to spend the next three years playing for Vanderbilt University. He was named the College World Series Most Outstanding Player in 2014 and was a finalist for the Golden Spikes Award in 2015. Entering the 2015 MLB Draft, MLB.com had him ranked as the overall #2 player behind Brendan Rodgers. The Arizona Diamondbacks selected him first overall, but then traded him in a package for Shelby Miller the following season to the Atlanta Braves.

Getting to The Show didn’t take long. He played 21 games in High-A and 84 games in Double-A before playing 38 games with the Braves in 2016. He hit 3 home runs, stole 3 bases, and batted .302 with a 9.3% walk rate and 18.8% strikeout rate. Not bad. The following season, Swanson played 144 games with the Braves and accumulated 551 plate appearances. He only hit 6 home runs and stole 3 bases. The batting average plummeted to .232, while the walk and strikeout rates ticked up to 10.7% and 21.8% respectively. Last season, there was some improvement, as he clubbed 14 home runs and stole 10 bases in 533 plate appearances. The batting average remained at .238, but the walk rate came down to 8.3% while the strikeout rate inched up to 22.9%.

Let’s head over to the plate discipline numbers. The swinging strike rate has ticked down from 11.8% last season to 10.4% this year. The contact rates are status quo, but the big difference is that Swanson is chasing fewer pitches outside the strike zone (27.3% vs 36.5% last season). That doesn’t look like an outlier either, as the 2016 and 2017 numbers were 28.8% and 27.2%.

When at look at the splits, Swanson is crushing left-handed pitching this year. .981 OPS with a 13.8% strikeout rate. The .358 batting average seems to be due to some luck, as the BABIP is .372. If I compare the ISO numbers, it’s .226 against lefties and .243 against righties. Ok, so some regression is likely in the works against lefties. On the flip side, the BABIP against righties is ony .250, so things will probably even out both ways.

Finally, let’s visit our good friends over at Baseball Savant. Swanson has a barrel rate of 13%. He had never had a mark above 7%. The exit velocity is at a career-high 90.5 and the launch angle has increased to 14.4.

Swanson is now 25 years old and this will be his third full MLB season. He’s entering his physical prime, has experience, is more patient, and elevating the ball more. He’s also been batting second in 23 of the past 24 games. Steamer has him projected for 12 home runs, 44 runs, 44 RBI, and 7 stolen bases in 380 plate appearances. That would give him a 24/13 season with 76 runs and 89 RBI. Not bad, not bad at all. I poo pood Swanson tv dinners earlier, but I was a pookie for their chicken pot pies. I’m all about Swanson today. 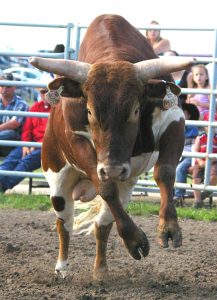