As a Korean-American, I’ve been sad lately. The World Cup soccer team is getting spanked and my boy in name only, Son Heung-Min, has not had a great tournament. In addition, the POTUS is doing things that bring tears to my eyes and enjoys hobknobbing with the nutcase in North Korea. When I try and console myself by thinking about Koreans in MLB, my brain instantly loops into the nightmare of Chan Ho Park serving up two grand slams to Fernando Tatis….IN THE SAME FREAKING INNING!!!! Arrrggghhhhhh!!!! Thank goodness for Shin-Soo Choo. Over the last week, he has a triple slash of .321/.441/.643 with 2 home runs and 1 stolen base. For the season, he’s batting .280 with 14 home runs, 48 runs scored, 36 RBI, and 3 stolen bases. Can the 35-year-old outfielder for the Texas Rangers keep chugging along?

When looking at the batted ball data, the line drive rate of 21.5% is well below the 25% mark from last season, but is in line with the career mark of 21.9%. The fly ball rate of 30.4% is a big increase from the 26.2% rate posted last year, but like with the line drive rate, is in line with the career numbers. The number that jumps off the page in terms of batted ball data is the hard hit percentage. 46%!, the highest of Choo’s career and well above the 35% career mark. When looking at Statcast data, Choo is barrelling balls at a 12.1% clip. He had never had a mark above 9% (Statcast data goes back to 2015). Me likely likely likely.

Not all is good, though. The contact rate in the strike zone is at 82.9%, well below last year’s mark of 86.3% and below the career mark of 84.5%. The same goes for the contact rate in general. Correspondingly, the swinging strike rate is at 9.6%, the highest in three years. These are things to be concerned about, but nothing to derail the Shin Soo Choo train.

Choo is competent against left-handed pitching, but does most of his damage against righties. He bats lead off and plays half of his games in a hitter friendly ball park. In addition, Choo is just as adept on the road than at home. How is Choo only owned in 77% of ESPN leagues? 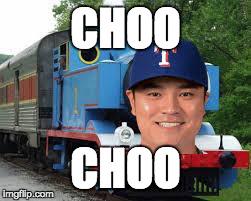 hey, we beat Germany and Sonny had a pretty amazing goal against Mexico. COYS!

@attgig: Yes sir!!! Was awesome seeing the Mexican/Korean alliance get stronger. Twas a good day. A coincidence that I wrote the article 2 days before?