Ahmed a guy the other day while I was cruising down the street in my ’64. Jacking tha freaks, clocking tha dough. Went to that park….Ha! I met Eazy-E once at the Fox Hills Mall. RIP. Gangsta Muggsy Bogues. Ok, enough silliness. There are 7.4 billion people in the world. So many different experiences and perspectives. I was watching the Korean version of “American Idol” with my mom and just kept thinking that there is so much talent in the world. Some never get discovered or are given the chance to showcase their skills for one reason or another. The same in the baseball world. How many kids get overlooked or just don’t have the resources to market themselves? Or how about just walking around the neighborhood? Do people still do that? Here in LA we just drive around cars and ride electric scooters. Anyways, one of the beautiful things about life is that on any random day, in any random place, you can run into a person, thing, or piece of information that has an impact on your day. Well, the other day, Ahmed a player that is 6.8% owned in ESPN leagues and is 79th overall and 7th for his position in home runs hit on the year. Nick Ahmed. Bear or Bull?

Nick Ahmed is a 28-year-old shortstop who is currently playing in his 5th major league season for the Arizona Diamondbacks. In 373 plate appearances, Ahmed currently has 14 home runs on the season. He had never eclipsed 10 homers before. The ISO is at .207. My initial thought was to insta-fade Ahmed, but in my not-too-frequent encounters with humans of the opposite sex, I have learned to always perform due diligence, as not everything you see is real.

Numbers look pretty close, except for the huge increases in ISO. There’s been discussion of the baseballs. There’s also Grey’s favorite topic: launch angle. Ahmed does have an 11.7 launch angle for 2018, which is a career-high. The last three seasons, that number was 9.9, 8.4, and 10.4. Steroids? Who knows. I can’t even begin to speculate. What I do know is that the swinging strike rate is down 2% from last season and he’s chasing 5% less pitches outside of the strike zone. Those numbers, coupled with the batted ball data, has me flip flopping like a fish seconds away from getting filleted.

Ugh, this must be how my wife feels when I ask her where she wants to eat!!!!

There’s also been talk that the acquisition of Eduardo Escobar will impact Ahmed’s playing time. Aaaarrrggghhhh!!!!!

I think Ahmed’s playing time will be fine, especially with Jake Lamb injured. Even when Lamb returns, the Diamondbacks love Ahmed’s defense at shortstop and, let’s be honest, it’s not like Lamb was tearing the cover off the ball prior to his injury, which is of the shoulder variety. The numbers tell me that there’s been some change in approach for Ahmed, but I just can’t buy into the fact that it’s made him a power hitter. If he was selling out for power, pulling the ball more, and chasing more pitches, then maybe. I have played Ahmed a few times in DFS, but there’s no way I’d trust him for weekly lineup season-long leagues. If you have daily moves, then he’d be a nice streamer, but nothing more. 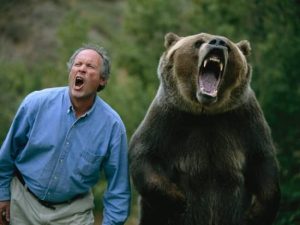