This is the 3rd post in a series on the 2011 Hall of Fame ballot.  My first post on Jeff Bagwell covered the criteria I am using for analyzing HOF players.  The second post covered Bert Blyleven.

The next players I’d have on our ballot are three middle infielders:  Alan Trammell, Barry Larkin, and Roberto Alomar. 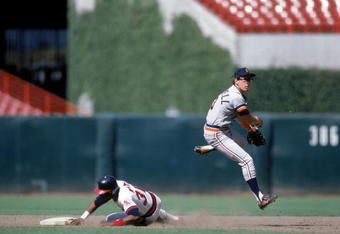 Before this latest analysis, I had these three in reverse order (see my middle infielder analysis from last year).  This also matched the HOF voters who had Alomar on 73.7% of the ballots, Larkin on 51.6%, and Trammell on 22.4%.

Trammell and Barry Larkin are pretty much a coin flip based on this analysis.  They are #2 and #3 based on my calculations for post-WWII shortstops who were retired as of 2005 – both trailing Cal Ripken’s 139.9 (If you count Robin Yount and Ernie Banks as shortstops, though they played 50% of their time at CF and 1B respectively, they would be #4 and #5).  Trammell edges Larkin on my calculations because his best season (1987) was an 8.4 MVP-level season while Larkin’s best was 7.4 (1996 when he went 30-30, a better year than in 1995 when he won the MVP). 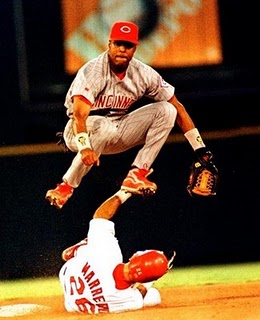 I think the reason why Trammell has been unappreciated so far by HOF voters is the middle infielder bias I referred to in my post last year.  MI’s rarely play long enough to get 3,000 hits (Ripken is currently the only player with 70% of their starts at SS to reach the mark.  Jeter will be there likely by the 2011 All-Star break) nor are they built to reach milestones like 400 HRs (only Ripken).  The one exception for a modern SS is Ozzie Smith who got in mainly for his glove.

Here is an interesting comparison of Runs above Replacement for Alan Trammell vs. Barry Larkin vs. Ozzie Smith.

While Ozzie was rightfully voted into the HOF fueled by his amazing glove, note how he gave back over 60% of those runs with his below average hitting.  While Trammell and Larkin were not in Ozzie’s class for fielding, their solid defense and much better bats more than made up for it.

As for Roberto Alomar, I was very surprised to see that he had less All-Star worthy seasons of 5.0+ WAR (5) than Trammell or Larkin (both with 7).  In reviewing the data, I found a couple of reasons for this (mis)perception:

1) Roberto Alomar’s sterling defensive reputation is not backed up by advanced defensive statistics.  Baseball-Reference’s Rfield has him at -32 runs for his career – basically saying he was a BELOW AVERAGE fielder.  Here is a comparison of the top 2Bs based on number of Gold Gloves.

Now it’s misleading in that several of these players (Morgan and Biggio) had struggles early and late in their careers but had solid Rfield stats during their Gold Glove years.  I think the advanced statistics correlate fairly well with the less exact Gold Glove awards so I am going to give the benefit of the doubt to the statistics that Alomar’s defense was overrated compared to the perception at the time (note: another popular metric, UZR, didn’t consider Alomar’s defense great either).

2) While I’ve found that middle infielders tend to be penalized in MVP-voting because of a bias towards HR/RBI that favor 1B/OF, it seems that Alomar’s top-10 MVP votes exceed his true value. 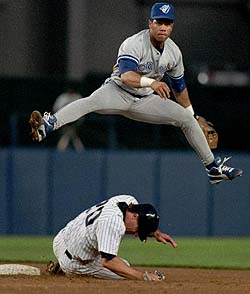 3) The boom in shortstops over the last 30 years hurts the perception of Trammell and Larkin vs. Alomar.

There have been good 2Bs in the past 30 years (Ryne Sandberg, Jeff Kent, Chase Utley, Lou Whitaker) but they do not cast nearly the same shadow.

This boom overshadows the fact that – everything equal – shortstops are more valuable than second basemen.  According to Tom Tango’s research, the estimated difference in value is 5 runs per 600 plate appearances.  A team win is estimated to be 10 runs and, thus, over a 9000 PA career (roughly 15 full seasons), a SS is worth 75 more runs or 7.5 wins.

Looking at their career rate statistics, the three players are very close to even.  Trammel’s offense is slightly below the other two though some of that is corrected for era in OPS+.  But look at Larkin vs. Alomar.  The rates are almost exactly equal!  Alomar did have 1,343 more plate appearances which would eat into much if not all of Larkin’s positional advantage in WAR (figure Alomar would need two seasons at 3.75 WAR to negate the advantage).  But I do not think the boost to his career counting stats (2,724 hits, 210 HRs, 474 SBs) vs. Larkin (2,348 hits, 198 HRs, 379 SBs) is the reason for their perceived difference (as seen in 2010 HOF voting).

So I see all three players as HOF-worthy but that Alomar is a little below Larkin and Trammell in total value.

Alan Trammell, Barry Larkin, and Roberto Alomar walked into a bar where they ran into a magical, beautiful nymph.  She looked at the three retired baseball players and said, “I’ve gone out with baseball players and I’ve been hurt by their pasts.  Before I can consider any of you, I must know what teams you played for, your major role, and who the owners were.

Trammell:  I was the heart of the Tigers when they were owned by Tom Monaghan (founder of Domino’s) and Mike Ilitch (founder of Little Caesar’s).

Nymph:  Ah, so I might catch a case of heartburn from you.

Larkin:  I was a great hitter for the Reds when they were owned by Marge Schott.

Nymph:  Ah, so I might catch a case of bat shit crazy from you.

Alomar:  I was a great player on 4 teams (San Diego, Toronto, Baltimore, Cleveland) and horrible on one (NY Mets).  I have been with too many owners to name.

Nymph:  Hmm.  Well, I don’t know what I’d catch from you but I sure as hell don’t want to find out.