As I prepare for my voyage into the Vegas desert, it’s that time of year to look at the futures bets for 2020. 2019 was a terrific betting season for me as I only missed 2 non-World Series winner bets (mostly win totals and prop bets). Realistically, the divisional, pennant, and World Series winners are typically poor bets given the restricted payouts and less likely occurrence than regular season win totals or player vs player prop bets.

Divisional
There are some nice values that can be had from betting divisional winners. Unfortunately, a number of the divisions have pretty clear favorites and aren’t worth the odds. Many times, you have to take the second or third option in the division to make any money. Not a place where I put a lot of money for futures bets, but a couple of gems can be found each season, a la the Twins last season.

AL East
The Yankees are the favorite to the win the AL East, and rightfully so, but with the injuries starting to pile up and the not so impressive -500 line, give me the Rays. The Rays have improved the roster with Yoshi Tsutsugo, Manuel Margot, and Jose Martinez along with what should be continuing growth from Brandon Lowe and Willy Adames. They have some prospects that could make a big difference in their run and top level arms in Snell, McKay, and Honeywell coming back from injuries.

AL Central
Another one where the incumbent division winner payout isn’t worth the gamble. The Twins continue stacking bats to out hit every other team. Is Grey running a fantasy team over in Minnesot?

The Indians had a down year with a number of key injuries and a poor 1st half showing from Jose Ramirez. A return to form for their pitchers and they could be right there for this division. I don’t want to pay money to take the Twins in a close division, so, give me the Indians.

AL West
Houston is still the favorite in this division despite losing Cole and all the scandal repercussions. However, both Oakland and the Angels are closing the gap and if I’m laying money, I’d rather not pay up at -230 for the ‘Stros as I did last season. The Angels at +600 are a nice value pick to lay a few dollars on. I don’t necessarily expect them to win the division, but they project similarly to the A’s with an extra +300 on the line.

NL East
The reigning champs lost a big piece in Anthony Rendon. The top 4 teams in the division are projected with 10 wins of each other. The Nationals have the arms and experience and are in the same range as the dysfunctional Mets. The confidence level in this division is minimal with the projected win totals being so close to each other.

NL Central
Even more so than the NL East, the NL Central is anybody’s for the taking. Everyone except the penny pinching Pirates are in the running and projections have the top 4 teams within 6 or 7 games of each other. The Brewers going off at +275, in line with the Reds, would be my choice, but the NL Central is likely just one to avoid.

NL West
The Dodgers are the clear cut favorite, but at -900, this feels like a hedge bet just to say you won. As you can see from the PECOTA projections, a 20th percentile Dodgers still likely takes the division over a 90+ percentile Diamondbacks or Padres. Lay that $900 to win $100 if you want, but probably better to save that money and bet it elsewhere for a better return. 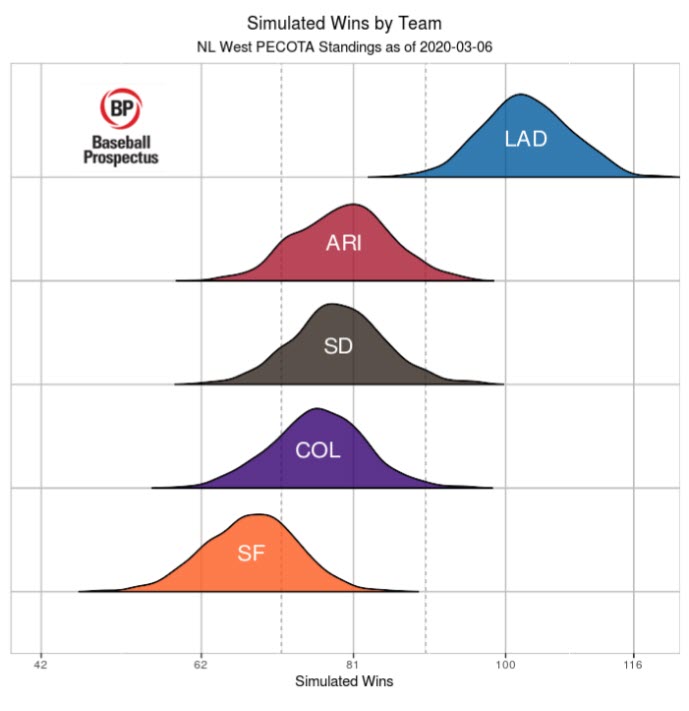 AL Pennant
When we get to the pennant winners, the odds start shaping up better in our favor. The Astros would still be my favorite to win the pennant at this point, so, +300 looks good on them. The Twins have bolstered their offense, but are counting on a repeat of some strong pitching performances in 2019. Still, they could out hit everyone and +700 is a solid line.  Deep shots on the As and Angels as they have made improvements and the AL seems more open for the taking this season.

NL Pennant
The Dodgers seem like the clear cut favorite and at +165, it’s not a bad option considering the injury filled Yankees are going off at +150. The current Champs are at +750 and the Cubs are a homer pick, but feel like a plus value at +1300. Better payout than the Reds and Brewers despite projecting as a top 2 team in their division and going off at a better rate within the division than the Reds and Brewers.

THE WORLD SERIES
The Dodgers feel like a strong bet for the NL representative for the World Series this season and at +375, could make some profit. While the Astros have more competition potentially, +750 feels like a bargain with the baseball world devaluing them. The Rays and Indians have the pitching to make a deep run into the playoffs with enough hitting to make it work. Can you imagine if either team was willing to spend money? 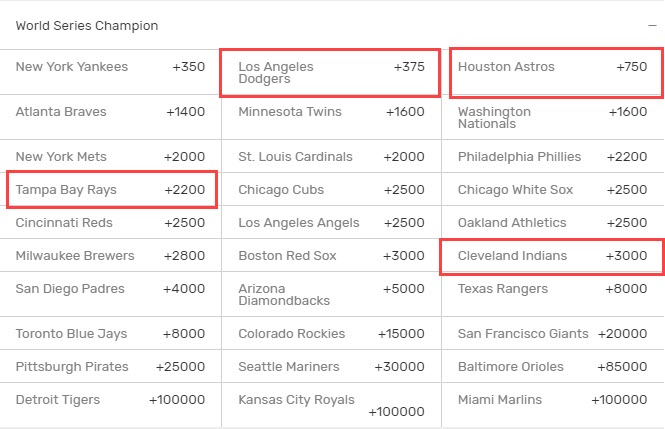 Regular Season Wins By Any Pitcher
In the last 5 years, only 2017 failed to result in a pitcher with over 20.5 wins. There has only been 1 per year, so, it’s no lock, but still would lay some money.

Stoles Bases
A player has failed to top the O/U mark of 48.5 stolen bases in the last 2 seasons. Stolen bases are becoming less important and players that steal are more susceptible to injury. I’ll take the under.

Doubles
There were 2 players who reached the over in 2019 and one in 2017. The 2 players from last season are Nicholas Castellanos and Rafael Devers. With Castellanos moving to the launching pad in Cincinnati, I’d guess his doubles numbers are coming down. While Devers is a legitimate threat to hit the over with the way Fenway works to right center field, he only hit the over by .5 doubles (54) in 2019.

Casey Mize has been great, but another player that likely won’t start the season in the majors. The Tigers aren’t going anywhere this season, so, why would they start the clock early on one of their top prospects. Jo Adell could force his way on to the Angels roster, but more than likely, he’s at least on the Kris Bryant timeline for the extra year of control.

Home Runs
It’s a bit crazy that Judge and Stanton are still so high on this list given the injuries, but I imagine that will adjust itself as the pre-season continues. When looking for the shots at prop bets, might as well try and find some nice payouts. J.D. Martinez can hit the ball as hard as anyone and for some reason is going off at +3000. Grey’s pick for homerun leader is Miguel Sano at +2000. No question Sano has the raw power to do it if he can stay healthy and he’s in a strong lineup that should get him plenty of PAs. 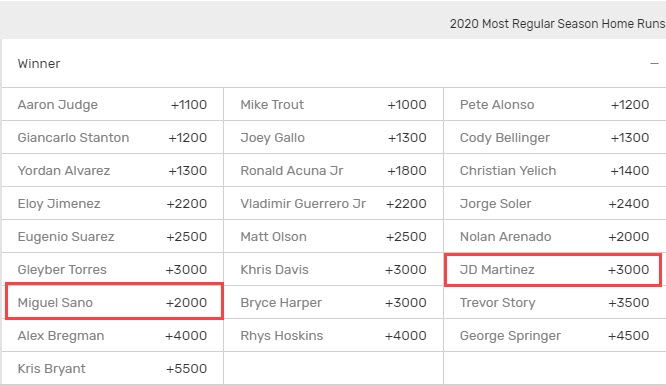 As mentioned above, Grey (@Razzball) is taking Miguel Sano to hit the most taters this year. 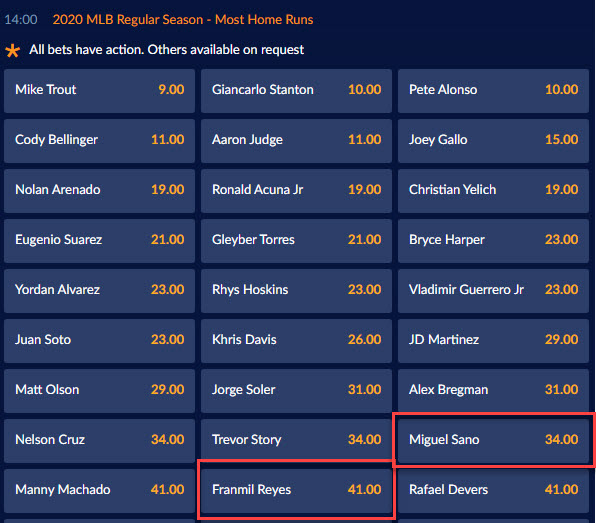 @Razzball_Pat is taking the Cardinals under 87 wins and the Nationals under 90 wins.

This is where the money is made. The divisional, World Series, and prop bets are fun, but less predictable and/or not worth the payout. The bets from 2019 that I mentioned at the start of the article, well, a majority of them came from right here. Using a combination of  projection systems made by people smarter than I, PECOTA and THOME, here are the teams worth betting on for their seasonal win totals.

The Twins, Phillies, and Cardinals are the ones out of the green light specials that are the most questionable based on confidence level, but still fit this grouping. I’ll likely be betting each of these independently and putting all of them except those 3 question marks (and maybe the ‘Stros) in a parlay.

Low Confidence Level From THOME, but both systems agree.

Both systems agree, but with a small margin from the over/under from at least one system.

Projected win totals are too close to bet.

Orange You Glad You Didn’t Bet These

Red (highlight) Means, Where Did You Get That Banana At?