On March 6th, I took part in the Tout Wars Mixed Draft – a 15-team snake draft that is unique amongst expert leagues in that it is a 5×5 OBP league. Otherwise, pretty standard. Weekly transactions. 2 catchers. $1000 FAAB. This is the 5th year for the mixed draft (the AL/NL-only ones have been around longer) and my 4th year participating in it.

Last Year Recap (here was my post-draft recap and final standings)
FINALLY. After two straight close 2nd place finishes to Adam Ronis, I won this league (Even better, it was a Razzball Tout sweep as Grey won Tout Wars NL).

As the standings below suggest, I had a charmed season. Everything broke right for me. I think I drafted/managed a little bit better than the previous 2 years but no doubt I was probably the luckiest team in the league as well. Shout out to pal Scott White from CBSSports.com (1st year in league) and the always tough Ray Murphy of BaseballHQ who did great jobs but, unlike me, did not sell their soul to the fantasy gods. 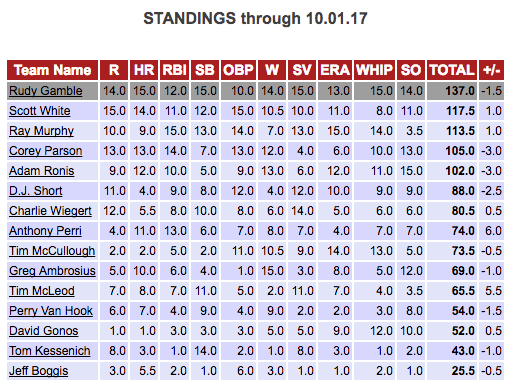 If you click at my post-draft recap link above, it will be pretty apparent why this team did so well. A Harper/Stanton/Sale start (again, 5×5 OBP), Carrasco/Khris Davis/Kimbrel at 5-7, and a 12th round Moustakas created a killer foundation. I picked up Whit Merrifield, Tommy Pham, and Ozzie Albies on FAAB. I even traded well to solve early SB/OBP issues with Khris Davis for Yelich and Lance McCullers for Dee Gordon swaps.

Here are the full results of the 2018 Tout Wars Draft. Below are my picks: