There is a special day in mid-February where I can freely and shamelessly express my love. Appreciate my partner in life. Get lost in romance.

That is Valentine’s Day. But the day before it was the 15-team LABR Mixed draft which is more fun and less expensive.

As always, thanks to Steve Gardner at USA Today for the invite. Can’t believe this is the 5th year I’ve been in this league.

I was holed up in an NYC hotel 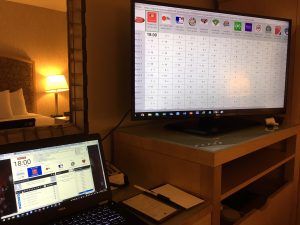 for the draft where luckily the wifi did not shit the bed (nor did I). No kids disrupting the draft. A background soundtrack of sporadic car horns and loud-talking pedestrians. I was able to grab the HDMI cord from the cable box so I could rock the two screens. If only I remembered to pick up a pastrami sandwich and a six pack, I could’ve been in Costanza heaven.

Quick Perspective On The Difference Between 15-Team Mixed w/ Weekly Roster Changes vs. 10/12-team Mixed Daily Roster Changes
I am going to share with you the only relevant difference between these two formats. If you are someone who plays shallow leagues with daily roster changes (and typically a high transaction cap), repeat this as a mantra in your head when drafting in this format (like in NFBC).

More of our PAs/IP need to come from players you draft or get in trades.

Free agency is still very important for filling roster holes and you still need to churn out the underperforming parts of your roster. This does not mean you avoid all risky/upside players and only draft a team full of boring, safe players.  The roster management skills you learn playing daily (ideally using our tools like the Streamonator and Hittertron) will come in very handy.

You just do not have the same safety net in this format if you mess up your draft because there just isn’t enough free agent talent or FAAB $ (especially LABR which is $100 vs NFBC and Tout which is $1000). Certain strategies like “Draft 3 Starters and stream the rest” is near impossible to pull off.

So think about the time you invest during the season in a daily format and invest some of it during draft prep to make sure you look back on your draft with no regrets.

Last Year Recap (here’s my post-draft writeup)
I finished in 4th place in a tight group with winner Jake Ciely of Rotoexperts.com, Mike Podhorzer of FanGraphs, and Fred Zinkie of MLB.com. Congrats to Jake.

I had a great top 7 rounds of the draft picking from spot #15. Blackmon, Correa, Odor, Strasburg, Adam Jones, Hosmer, and Kimbrel was about as close to the ‘nuts’ as you are going to get in an expert draft. I also had arguably the best last 2 pick combo (28th/29th) in the history of the league (I’m too lazy to confirm this) with Joey Gallo and Corey Knebel. Add in Felipe Rivero for $1 in the first FAAB period and I had a great core.

The Achilles’ heel of this team was SP3/SP4 with Steven Matz and Drew Smyly and some rough Win luck. My killer Strasburg/Shark/Kimbrel/Rivero/Knebel quintet and decent FAAB SP pickups ensured strong ratios and K’s but I was starved for Wins all year. Seriously, look at the standings. What are the odds someone could total the most K’s, the least BB’s, and yet tie for last in Wins?

My speed bets (Odubel, Nunez) were mediocre and there was no speed available to trade. I thought I hit the lottery with Mallex Smith in FAAB (after Kevin Kiermeier went down) and the mediocre SBs were not worth his other sub-mediocre stats. I compounded my SB weakness by trading Merrifield (another $1 pickup) before he went on an SB tear for Jameson Taillon – a trade I would not have had to make with just 100 IP each from the 2016 versions of Matz and Smyly or finding one breakout in later rounds (e.g., Severino) or just some damn Wins. Ok done. 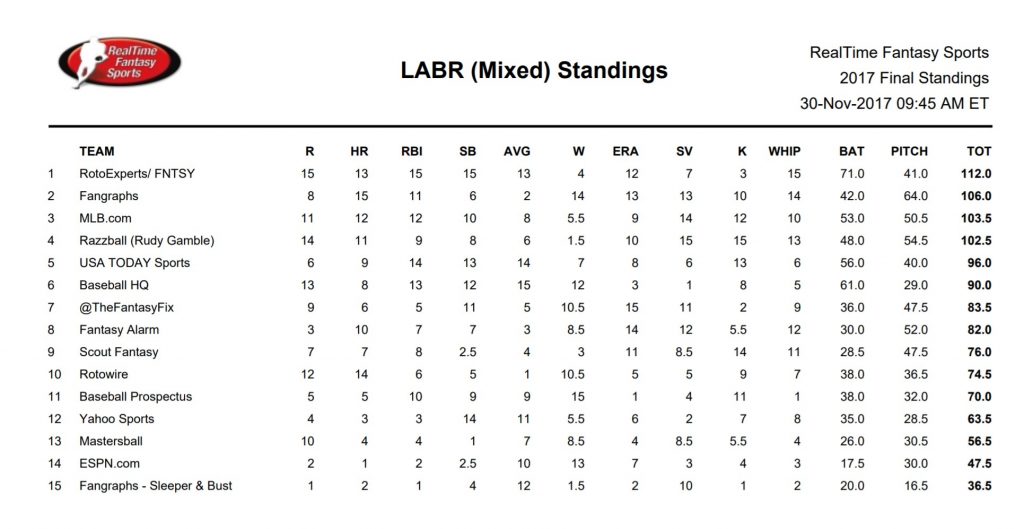 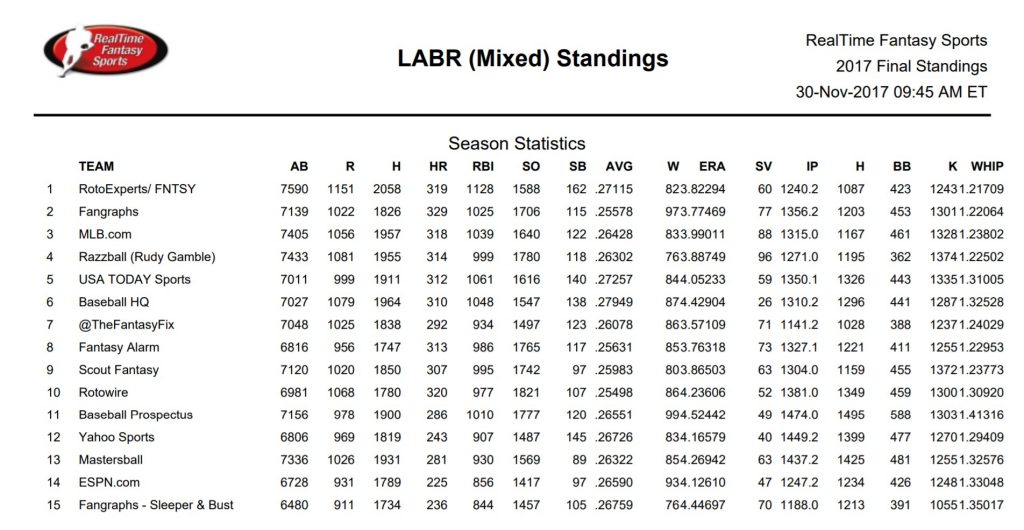 2018 Draft
I found a process in 2017 that I liked so I stuck with it this year. I build a War Room that allows me to mock draft against NFBC ADP and track my team $ totals per category. My goal is to anticipate the tough decisions and plan accordingly. The #1 thing I am looking to avoid is being in a position in the draft where I am chasing a category or position and I am dependent/desperate for a specific player to make my team whole. Those are the cases where you have to overdraft the player, get lucky, or scramble. The #2 thing I am looking to avoid is a panic pick when you just do not know whom to choose.

I do a handful of mocks and I end up with a general script for the first half of the draft. I try to have contingencies on every pick – e.g., Pick 3 is SP out of (Strasburg, Severino, Thor, DeGrom). This isn’t set in stone. If a great value falls my way, I adapt. The goal is to minimize scrambling or realizing post-draft that my team has a major hole.

Here are the full results of the 2018 LABR Mixed League Draft. Below are my picks and my analysis:

General Notes/Strategy
I am going to re-use the same format from the previous three years as most readers seem to prefer it to just a pick-by-pick analysis. This format does mean I talk more about my competitors’ teams than most post-draft write-ups. I do my best to be respectful yet honest.