So I participated in a 20 team, 5×5 draft (C, 1B, 2B, 3B, SS, 3 OFs, UTIL, 2 SPs, 2 RPs, 3 Ps, 4 Bench slots) recently because Grey was watching the Oscars instead (Um, Tivo?). I came away hating the time I had to wait between picks but also that my queue was being raided worse than an adventure with Short Round. I picked 9th overall and wanted to come away with three big bats in a row regardless of position without having to reach too far for star power or “man-crushes.” It’s almost impossible not to reach slightly with the time in between picks — 16 in one direction and then a whopping 22 the other way. So I set my sights on huge power potential guys and was basically punting SS and Catcher. I took chances on guys like Bay and Byrd based on the fact they will pretty much play every day and given their position in the lineup helping their fantasy potential. Starting pitching-wise, I am pretty decent (4 top 70 guys) as there were several huge runs on SP in the draft.  Also, huge runs on closers, but I refused to overpay for SAGNOF. Biggest needs for my team seem to be batting average and steals, but everyone has holes in a 20 team league. So take a gander at the results, criticism is always welcome. 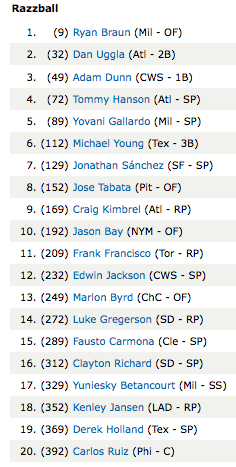